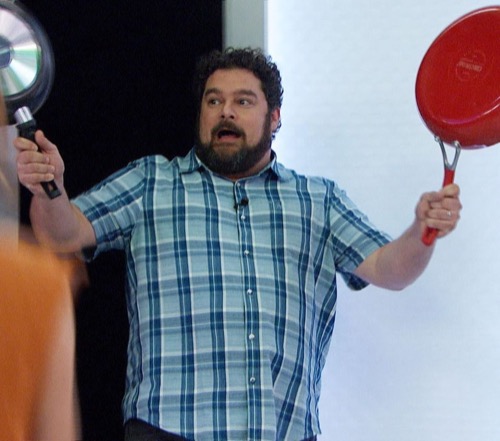 Big Brother Season 19 (BB19) continues on Day 73 when Christmas adjourns the nomination ceremony with Alex and Jason on the block; Jason is her target and hopes to send him off to the jury house. Alex says they need to play it cool and win the veto to send the old man, Kevin out of the house. Jason is confused because he doesn’t know anything that is going on.

Paul talks to Jason and acts like the plan is to still get rid of Kevin; he is cocky towards the camera saying this was all his idea, so he knows exactly what is going on. Paul tells Jason to not freak out and he is fairly certain that he is being duped by Paul to keep him calm and thinks its a bit creepy. Jason goes to see Kevin who says they can’t put both of them up as pawns because one of them will get hit and the house is going to send one of them home; Kevin tells them to pull it together and Jason wonders how he would know that Jay is the target.

Jason continues with his search and corners Josh in the pantry; he says that he thinks Christmas’ plan is to throw off Kevin and send him home but he tells the cameras he is trying to do a bit of damage control so Jason doesn’t go crazy. He thinks they need to get Jason to calm down and make sure he doesn’t win the veto so they can get him out of the house while they still have the chance. Paul comes into the pantry and tells them he thinks he is the one who will be back-doored and leaves again. Josh realizes that Paul is working everyone and all angles and the entire house is buying it.

Christmas and Alex tell Jason to calm down as well; he tells them that Kevin told him either Jason or Alex is going home this week. He is able to relax a bit when Christmas says Kevin doesn’t know anything and Christmas says everything in her speech was true and doesn’t know how he could think he was safe now as Alex tells him that she is trusting Christmas; he is struggling to believe he is not the target.

Christmas, Paul, and Josh talk in the HoH room; she is amazed that both Alex and Jason could think they are safe and she rocks Josh saying she is having a “meatball” moment. All they have to do now is win the veto so they control everything this week. Josh and Christmas can’t stop laughing at how dumb they are.

Alex keeps telling Jason to not panic yet as they still have the veto; Paul walks in and Alex jokes about them back dooring Paul. Paul learns that Alex would pull Jason off if she won veto because Jason is too squirrelly. Paul hopes he can convince both the nominees to throw the veto competition to him and if he can pull this off, people should just call him Houdini. Josh comes into the room and Alex tells him they need to let Paul win so he can save them. Josh learns that Paul must be planting the seed of doubt in Jason’s mind and wonders what he is up to.

Christmas comes to see Josh, asking if he spoke to Paul. She worries from Josh’s facial expression and he tells her that he knows Paul has their back 100% but he is working his own angle for Jury house and tells her what Jason said to him about having an alliance with Christmas and how Paul is telling people he is getting backdoored. Josh says that Paul is playing this game better than any other season and wants to make sure they keep an eye on Paul.

Christmas tells him she has heard him but he needs to shut his mouth because if he keeps raging someone is going to hear him. She says Josh has a point but realistically she needs Paul and Josh in the game to get her further in the game physically. Josh says he is just going to focus on the veto competition.

Christmas calls everyone to come to the living room so they can pick the 6 players for the Power of Veto competition. Christmas, Jason and Alex stand in front of everyone; Christmas picks Kevin. Alex picks Raven and Jason picks Houseguest (HG) choice, and he chooses Paul because ultimately he trusts Paul more than Josh.

Josh is the announcer and calls everyone to the living room. The winner of tonight’s competition not only wins the power of veto, they also will be given a behind-the-set tour of CBS’ new comedy series Me, Myself & I; and they are given a preview of the new show, that will begin on Monday, September 25, 2017.

Josh wishes them good luck and Bobby Moynihan, best known for his roles on SNL and the main character in the new series arrives at the front door; he comes in banging pans together like Josh always did. Bobby reveals he is going to be the host of the veto competition but in the meantime enjoys a tour of the BB house. He enjoys the time with them but aside he makes fun of each one of them.

Bobby comments that all the HGs are idiots as they should have gotten rid of Paul a long time ago. He then tells them to all get dressed and meet him outside for the competition.

He begins by announcing his new series “Me, Myself & I” will begin on Monday, September 25 on CBS; everyone cheers as he says on the show they will be playing Alex Riley at different stages of his life, he is also an inventor and thinks his invention will be the next best thing, he clicks a button that is the punch, kick, slap machine and BB needs test subjects to see if they are ready for mass production.

The HGs need to take their place in the middle of the machine, each round they will be machine will deliver a sequence of blows and he will ask a question about what they experienced; each right answer gets a point and at the end of 6 rounds, the one with the highest number of points will win the golden power of veto; if there is a tie they will go into tie-breaker mode!

The first round, Jason answers incorrectly. Round 2 – Alex, Paul and Raven get a point. Round 3 – Raven is the only one who got it right and is in the lead. Round 4 – and everyone gets a point except for Raven; currently in 1st place is Alex, Raven and Paul with 3 pts. Kevin and Christmas have 2 pts and Jason has 1 pt. Round 5 – everyone gets a point except for Kevin and Raven.

Alex and Paul are tied for the lead and now we enter the final round, Round 6 – everyone gets it right but Raven, there is still a tie between Paul and Alex who are now playing the tie-breaker. Jason tells Alex not to throw the game and she is determined not to throw the game; they keep playing round after round and Bobby jokes as a fan this is fantastic. Paul wins the golden power of veto and hugs Bobby; Jason says he trusts Paul and this is BB and you can’t know what could happen.

Josh asks Christmas outside what she thinks is Paul’s pecking order and she says Alex, Raven, Kevin; he questions how that benefits all three of them and she tries to sooth his concerns but it appears she didn’t do anything. Josh walks away when she tries to help him find a solution, she angrily follows him and says not to come to her with a problem and then dip out when she is trying to find a solution; she chastises him saying she is a grown ass woman and he is not to treat her like that. Raven walks in and asks what Josh did and Christmas says that Josh knows what he did and Raven doesn’t need to know.

Josh tries to have one last talk to Paul and Christmas saying this move is a Paul move and not a team move; he does not want them to use the veto at all; he questions how Paul can do this. Josh says since he aligned with the two of them it hasn’t been about his best interests but the interest of their team; he is pissed off and frustrated they are not listening to him. Paul says if he makes a mistake he will take the heat; Christmas agrees.

The veto meeting begins and Paul says he has the power to veto one of the nominations and has decided to use the power of veto on Alex. Christmas needs to announce a new nominee for the block, she says since Kevin has never been on the block he can take a seat next to Jason and the veto meeting is adjourned.