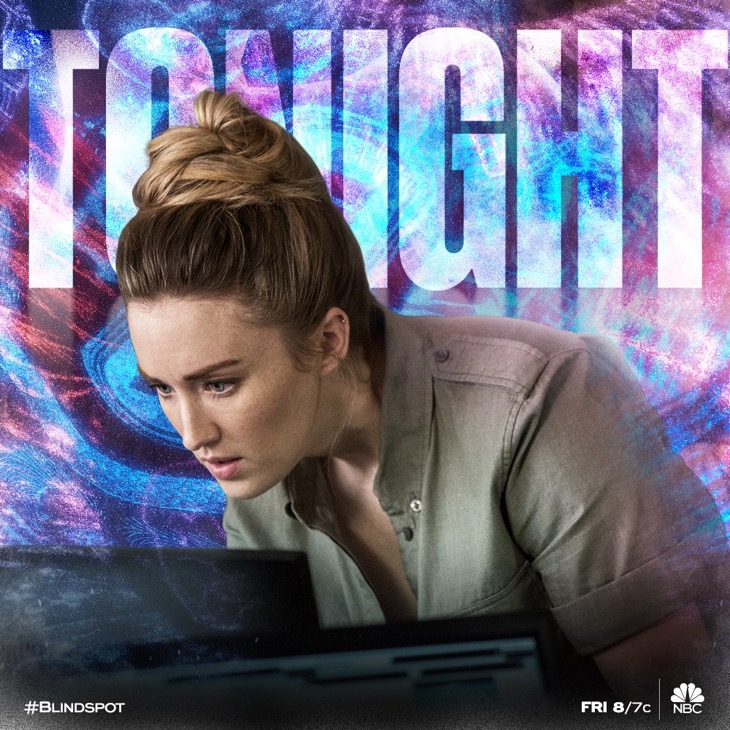 Tonight on NBC Blindspot airs with an all-new Friday, December 15, 2017, episode and we have your Blindspot recap below.  On tonight’s Blindspot season 3 episode 7, “Fix My Present Havoc,” as per the NBC synopsis, “Facing a threat within the FBI, the team is forced to run a covert operation out of Jane and Weller’s apartment. A tattoo leads to a doctor with a deadly secret.”

Hirst was dirty. That was the something the whole team was finally in agreement on and so tonight came the hard part – they then had to prove it! But the last person that came even close to figuring it out had been Stuart and he had gotten killed. So the team believed Hirst must have been behind his death and have tried picking up from where he left off. Stuart had been investigating the Vincent Van Gogh self-portrait, however, there had been nothing hidden in the images and the team didn’t know how they could connect it with Hirst.

But Roman decided to do them another favor. He sent them a package full of baby blocks and it hadn’t been for Bethany. It had actually been another clue and it had been for the moment they realized they needed to take Hirst down. So Roman had somehow found out about their secret investigation and was helping them through his clue had led them to a clinical trial and no one had known why that was so important. There hadn’t been a connection between anyone involved with the trial and Van Gogh much less someone with VG for initials.

So the team knew they needed to get more information about this trial and they couldn’t use their badges or their guns. Both of which would have alerted Hirst because she would know that they were investigating her and so the team had to find another way of getting information. They had pretended to be checking up on the clinical trials as potential investors and had questioned everyone from the doctors to the people going through the clinical trial. But what they found about the woman running the trial had answered some questions.

It turns out Margaret Palmeri had been taking bribes because she had invested all of her money into creating a cure for a potential epidemic and that epidemic never happened. But Palmeri had been taking bribes from everyone that was on her trial and they were all rich besides this one patient. So Jane and Weller went to go talk to Julian and they found him to be a nice guy that owned the trial his life because he would have been dead without it, but Julian said he came to be on the trial thanks to his husband. A husband that just so happens to have one ear.

The one-eared husband had, unfortunately, walked in on the interview between the couple and Julian and had tried to make a run for it. But neither Weller nor Jane could allow him to get away knowing their covers had been blown. So they chased after him and eventually caught Eric Vance before he could warn Hirst about them yet they hadn’t been able to take him to the interview room afterward because of the whole secrecy thing and had therefore taken him back to the apartment where Eric realized he wasn’t technically under arrest.

Eric told them how he figured out and that he wanted a liar because if he wasn’t under arrest then it was kidnapping. But they couldn’t give him his lawyer and so they tried to find a way to pressure him into talking. They went back to see Julian and had asked Julian about his husband’s work, however, Julian didn’t know anything. He didn’t even know that Eric had taken a leave from work. He was apparently been part of Hirst’s security detail back when she was at the DOJ and he went on leave the same time she left the DOJ to run the FBI. So they wanted to know why?

Alison had provided them the background information on Eric, but she hadn’t been able to tell them anything else and so they had to piece together the rest. They assumed Eric did something for Hirst and that Hirst had gotten his husband on that life-saving trial. But it wasn’t until they applied some pressure like telling Julian everything that Eric admitted Hirst had blackmailed Palmeri to getting Julian on that trial. So Eric was willing to make a deal as long as the husband was protected from any possible retaliation and so the team agreed to help.

They knew Julian didn’t deserve to be harmed because of what Eric did and so it was no problem helping him. But they eventually learned that Palmeri was a bigger concern. She had kept on one of the doctors that had helped create the cure for the KTL virus and the woman was working in a lab that seems off the books. So Patterson checked it out and she found out Palmeri had taken the step to create the KTL virus because she wanted to also create an epidemic that no one was able to cure besides herself. And so the team raced to the underground lab though it was too late.

Palmeri and her assistant had taken the lab rats to the sewage system and had released them before the team could get there. But Jane and Alison had shut down the site because they knew Weller would eventually catch up to Palmeri. So they stopped the virus from going out in the world and they had been right about Weller. Weller managed to talk Palmeri down from doing anything else stupid and had arrested the doctor yet they hadn’t been able to get to Julian. Julian had checked himself out of the hospital because he realized his husband did something bad to get him into the trial.

So the team tracked down Julian and had Eric convinced him to return to the hospital even if their marriage was over. But after Julian agreed to go back, Eric told the others everything. He told them how Hirst used her position to blackmail the rich and powerful until she started to get greedy. She would send Eric to threaten people into giving her what she what wanted and she wasn’t afraid to bring kids into the matter, but she had actually killed Stuart herself. He had called to tell her he had uncovered a new tattoo by himself and that it had given him a name.

But Hirst killed him before he could connect Eric to her and she had Eric return the favor by cleaning up the crime scene. So Eric had the power of taking down Hirst and they thought that it would be the end of it, however, Hirst must have found out about him because a sniper had shot and killed Eric from a window. Which destroyed the team’s entire case against Hirst and made them realize she must have found out about their investigation.