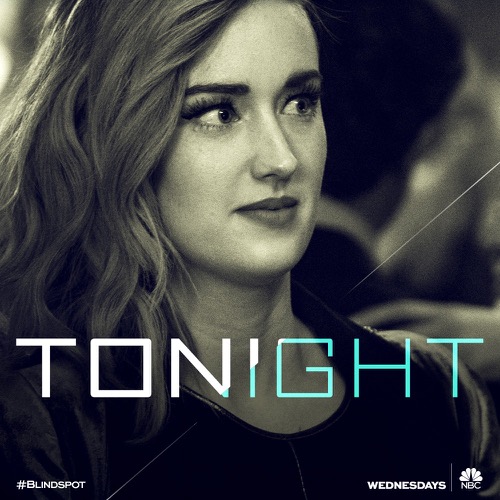 Tonight on NBC Blindspot airs with an all-new Wednesday, February 15, 2017, episode and we have your Blindspot recap below.  On tonight’s Blindspot season 2 episode 14, “A secret society must be infiltrated by the team in order to solve a tattoo, but to gain access to the society, they need help from one of its alumni—Rich Dotcom.”

Reade was going down a dangerous road. He had started seeing someone he shouldn’t have and he hadn’t entirely been truthful to her about what happened to her last boyfriend. But one and probably the most important reason Reade shouldn’t have gotten mixed up with a woman like Nikki was because she was toxic to him. Nikki brought around cocaine and treated it like it was a toy. So it wasn’t shocking when she then put Reade onto the habit and didn’t care if it would jeopardize his job however Reade still had some common sense and he knew better than to do drugs while he was on the lock… at least for now.

However, Weller hadn’t noticed in what condition Reade had come into work because he had been little preoccupied with a tattoo. One of the two tattoos had apparently solved itself and Patterson didn’t know what it meant. She said the connected with the sale of lithium which was used in high capacity batteries like cell phones and electric cars yet she didn’t know why it was suddenly triggered by lithium being at all time high. So Patterson and the others looked at the tattoo to see it held any significance and it did. It was a symbol commonly referred to as Daedalus and, besides the mythological, it also referenced a secret society at Jameson College.

The college has the who’s who of alumni and so a secret society wasn’t going to give up its members. Yet, a partial members list was published a few years ago and the name Gord Enver was on it and that was some frustrating news because no one wanted to see who Gord aka Rich Dotcom ever again. So they all had to bite their tongue when they gave the order to have him brought to the station though they found out they had a problem on their hands when they saw for themselves that Rich found religion. Rich it seems had decided to study all of the religions and mash them together to see if he could save his soul from damnation.

So Rich was hard to make sense of and it took every bit of Kurt’s willpower to not want to punch Rich in the face. Though Rich was still sane and he did actually know something about the code. Rich had said that every year each class or member were dared to take more and more risk, but the code that was on Jane’s back was the basically a dare for starting a war. And so the lithium had suddenly made sense because someone could start a war with one of the most valuable commodities on earth and so Rich was told who might very well be the person behind it.

Rich explained that he had gone to school with Zach Riley. Zach had gone on to become a billionaire with a finger in everything and so he had stock in electric cars. But to find out what Zach was planning, they had to go to the alumni meeting with members of the secret society. So Rich told the FBI that his ex-boyfriend Boston was also a member of Daedalus and that meant two agents could go in as their guests for the night however Rich had sort of forgotten to tell everyone that he may have burnt some bridges with some of the members.

Rich it seems hadn’t told Weller that he wouldn’t be able to get the other man into the super secret meeting because he had liked Weller acting as his date. However, Weller hadn’t been so happy when they couldn’t go through the door because of someone named Phineas. Phineas or Phiny as Rich liked to call him had still been upset that his BMW had been reassembled on top of his dorm. So that made getting through the front door a loss yet Rich had luckily with up another idea. He had said that they could the old prohibition tunnels under the university

Rich had once used the tunnels to sneak in prostitutes and so he had been hoping that nothing had changed since then though unfortunately there were a few things that were different. Like the closet that Rich used to use had been turned into an extension for the clubhouse. Yet, Rich’s old friend had stepped in and had allowed Rich to enter. Rich’s friend Thad had known that Rich like hookers and even thought that Weller was a hooker that he would like to after Rich was done with him. So Thad had seemed like a nice guy and no one had suspected him of being anything different because they were looking at Riley.

Though Riley sold his electric car company and that meant he had no reason whatsoever to need anymore lithium. So the guys didn’t realize Thad had bought Riley’s company with a few of the others until Thad later kidnapped Rich. Rich was the plan and the guys had triggered the code because they had wanted to get Rich out of jail just in time to help start a war in Bolivia, but Rich hadn’t known what was happening until the gun was trained on him. And so Rich tried to stop the war and he had gotten shot for it.. twice. Rich had gotten shot by Thad to comply and then shot by Weller who was stopping Thad from using Rich as a hostage.

So the plan worked and the war was adverted however Rich had wanted something afterwards. He had wanted Boston to be moved to a minimal security prison where he could get out because of good behavior and to sweeten the pot Rich told the agents about the second tattoo he could help them with. But Jane had surprisingly withheld a few things from Weller on tonight’s episode that will come back to bite her if he ever find out on his own.

And it turns out, Riley was in on something with Shepherd and Sandstorm.