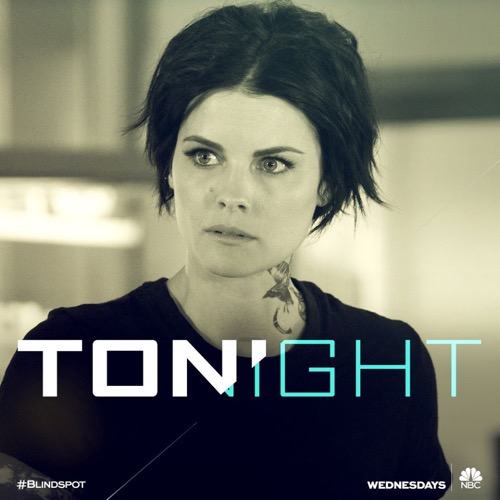 Tonight on NBC Blindspot airs with an all-new Wednesday, February 22, 2017, episode and we have your Blindspot recap below.  On tonight’s Blindspot season 2 episode 15, “Multiple leads must be chased to catch a lethal courier, so the team split up into unexpected pairings: Weller (Sullivan Stapleton) and Roman; (Luke Mitchell) Jane (Jaimie Alexander) and Zapata; (Audrey Esparza) and Patterson and Reade.”

Jane hated it when the others treated her brother like a criminal. Yet, she knew that the FBI had no reason to trust him and that he had once been working against them however her problem with his treatment was the fact she could see how much he was changing and couldn’t understand why no one else could. So Jane had tried to do something good for Roman. She had asked Weller if Roman could be given more freedom and be allowed to go in the field with them. And so Weller had to tell her that they couldn’t keep letting Roman out of his cell. It was a cell and not a hotel room that he could check out of whenever he wanted.

Anyways, Roman had already been released once before because of a mission yet that op had at least directly required because the FBI had been out of options. But Patterson had been working on the latest tattoo with Rich’s help and Roman seemingly had no connection to it. So Weller had had every reason to say “no” to Roman working with them and he hadn’t been quite finish with telling Jane things she hadn’t wanted to hear. Weller for some reason (like I don’t know jealousy) had warned Jane about Oliver. He Jane that she needed to be careful about the guy she was seeing because he could be Sandstorm.

Though when Jane had said that she was doubtful about that, Weller had explained that Shepherd was often more involved than they thought. Shepherd had after all kept watch over Weller as he was growing up and she had worked behind the scenes to make sure that Weller was doing exactly what she wanted him to. So everything that Weller said had resonated with Jane. She knew what her mother was capable of and that in turn made her doubt Oliver’s true intentions, but she had backed down from arguing how nice Oliver was when she could see that Weller wasn’t willing to hear it.

So Jane benched that conversation that she knew was complicated and she like everyone tried to pay attention to the highly complicated explanation that Patterson had for the latest tattoo. The tattoo was apparently based on a continental coin from 1776 and it could be used to decipher a code though the code that Patterson was able to find spelled out Marc Gelman. Marc was severing time for involuntary manslaughter because he had hit a woman with his car and, well, that didn’t have much of connection what else Patterson found. Patterson found out that Jane’s tattoo was used by a “special” carrier service called Lelantos.

Lelantos carried some dangerous items for often even more dangerous people. Therefore, they weren’t the sort of people that would easily go down or be connected to a mere manslaughter however Jane and Tasha had did a little research into Marc and his manslaughter charge had happened long after the tattoo. So Tash and Jane had Marc brought in while Weller decided to give Jane’s idea a chance. Weller had thought about her suggestion to let Roman work with them and he had thought that maybe it would help Roman. Roman had remembered a few things when he had first been let out and so there was possibility that could happen again.

But Jane had been concerned in letting Roman go alone with Weller. Weller had said that Roman needed to be pushed out of his comfort zone and so he had wanted to team up with Roman alone yet Jane knew something that he hadn’t. Jane knew her brother killed Mrs. Shaw (Taylor Shaw’s mother) and she had actually been waiting around for the right moment to tell Weller that when he had surprised her by shutting her out. So Jane had wondered if her brother would say something that he shouldn’t and in the meantime Weller had wondered if Roman could handle being out in the field again.

Roman was unstable and taking him out much less doing so without Jane was a risk. Though Weller had put his faith in Jane and Jane had believed her brother would be better off having contact with the outside world. So Weller and Roman had followed up on another lead that the same tattoo had given them. They had looked into Inner-Care Medi Spa that had seemed like another plastic surgery clinic and Roman had pretended to have a temper relapse. Roman had been fine one moment and then he was suddenly freaking out so Weller hadn’t known what was going on until Roman later explained himself.

Roman had been faking a fit in order to get close to the doctor and grab what they needed to gain access to the doctor’s files. Which was risky and something Kurt had bene grateful for. However, they were looking into the files when they realized that the “special” carrier service had been dropping off people. So that matched up with what the others found. Jane and Tasha had found an auction house that carried Continental coins though it secretly had armed guards and were literally moving people. And so that’s what the tattoo had been trying to tell the FBI. It had been saying that Lelantos was in the business of human trafficking

So the woman that ran the place, Marjory Ellis, was the one to catch however she had made her escape while the ladies were dealing with gunfire. Yet, Marjory had eventually showed up at the clinic to deal with some loose ends. She had killed because he apparently knew too much and then she had kidnapped both Roman and Weller when they tried arrest her. And so the guys had been trying to figure out a way to escape with the other prisoners when their buddies in the task force helped them. The FBI had sent a team after Weller and they had taken care of the guards so that allowed Roman to aid the others in escaping.

Margery on the other hand had shot Tasha and had been taken down by Reade. Reade had been MIA for most of the op and he had a bunch of excuses. But Patterson knew the truth. She revealed to Reade that she had a brother that suffered from addiction and that she recognized the signs. So she had tried to get Reade to admit the truth to her yet refused to do so. He said he didn’t have a problem and that she needed to mind her own business.