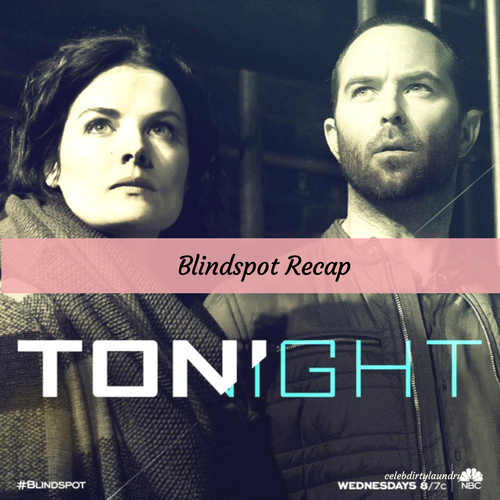 Tonight on NBC Blindspot airs with an all-new Wednesday, April 26, 2017, episode and we have your Blindspot recap below.  On tonight’s Blindspot season 2 episode 19, “Oliver, Team Arrow, ARGUS and the SCPD kick off a citywide manhunt for Adrian Chase.”

Shepard arrives in Bangkok. Patterson and Weller work to freeze off shore accounts without success. After some additional hacking, Patterson manages. Shepard’s deal goes sideways when she can’t access the money. She and her people are in a shootout. One of the men escape in a truck. Shepard runs after him. She takes a few side streets on foot. She spots him in traffic and jumps onto the truck. The two are punching each other while the man drives. She gets the upper hand. But falls out of the truck. The authorities are there to pick her up. She raises her hands, giving up.

Patterson updates the team on Serpent 16, a hacker who poses a threat to the US. Jane, Weller and the team head to grand central. They split up, keeping eyes peeled for their target. The target senses them and runs. He slices into the neck of a civilian and then runs. Weller nabs him. He has an envelope with a rubric’s cube.

Patterson knows what the cube is all about. It’s part of the mannequin challenge. Patterson decrypts a photo with several people standing still. It leads the team to the realization that several military documents and protocols will be released. They need to stop it.

Shepard is in a cell. She has to stay until the American consulate opens on the morning. One guard will watch her. She asks for water.

Patterson solved the cube. She has a dark web address. She has to steal a file to prove to the hackers that she is hard core. Patterson picks an easy file to hack. They need a password. Jane and Weller hit the streets to get it from a CEO. They pop his tire. He is forced to take a cab, one Weller is driving. They record him accessing the account on his phone.

Weller talks with Reed. He is going to give him some time. He leaves the office and sees Tasha. He explains that he is going to own his issues and move forward.

Weller and Jane are brought to an old mental hospital. They need to answer a riddle to get in. They succeed and enter. The place is filled with hackers and some spies. They look around for the leaders who plan to award the most talented hackers with classified documents. A light flashed from the top platform. A woman steps down. She is one of the owners running the show. She explains that her sister, also a hacker, died in a boat clash last month. She wants out. She wants to hand these documents to a talented creative hacker. But first she knows there are cops in the crowd. She asks everyone to Id them. She points suspicion at Jane, who manages to make her feel wrong. The woman shoots at two people in white, killing them. The crowd is in shock. She tells them to relax. She got them. Weller and Jane freeze and keep quiet.

Weller and Jane are brought to a room by the woman. She plays a prerecorded video while the two answer questions. They are wired to a polygraph.

Patterson and Tasha find out Shepard is in Bangkok.

Weller and Jane continue to answer uncomfortable questions about each other honestly. A door in the room opens – its another challenge. They work to find 4 keys in the room to unlock 4 locks. They get them, unlock the locks. A button emerges from the wall. They hit it. Part of the wall opens. It’s a glass window showing the team next door to them. The TV tells them that the only way to get out is to hit the button. It will fill the room next door with lethal gas. Jane is in shock – there is no way someone would do that. Weller trusts that the leading lady hacker would after shooting two people in front of the crowd.

After trying to connect with the guard, he finally hands Shepard a glass of water. She slams him against the cell door. He hits the floor bleeding. She gets out.

The other team finishes the test and hits the button. It was trick. The gas fills in their room. Weller breaks a glass with a chair. They rush to the finish line. The lady hacker and her sister is there. She isn’t dead. Running their website has become a drag. She hands over the zip drive with the documents.

Shepard makes it to the outside and boards a boat. Reed talks to his therapist about flashbacks. Maybe he should be in a different field, she suggests.

Patterson opens the drive with all of the documents. It’s all of the cabinets health records. They all solved a big part of the puzzle but there is more to go. They head to the bar. They celebrate what Weller calls a big win. Patterson and Tasha go get more drinks. Weller and Jane talk about the uncomfortable questions they answered. Weller is happy he works with Jane. He leans in to kiss her. Patterson and Tasha come back to the table, ruining the moment.

Shepard calls in to tell a man that she has secured the weapon. She is on schedule. He tells her that the Truman Protocol hit the open market, its gone. She knows who has it. She declares that Weller needs to die.

Tasha leaves the bar. Cops swarm her. They arrest her in the street.