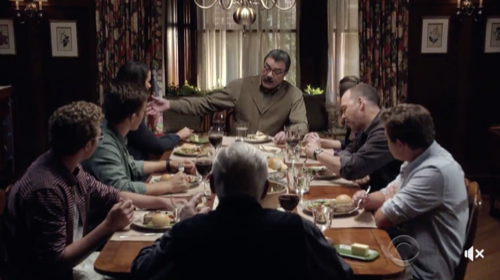 Tonight on CBS their hit drama starring Tom Selleck Blue Bloods airs an all-new Friday, November 3, 2017, episode and we have your Blue Bloods recap below. On tonight’s Blue Blood Season 8 episode 5, as per the CBS synopsis, “A famous basketball player is found dead of an apparent drug overdose. Danny investigates and looks into the victim’s possible ties to a local drug gang. Meanwhile, Erin revisits the case of a man she may have wrongfully convicted years ago; and Frank is approached by Archbishop Kearns regarding an eviction matter that Jamie and Eddie are working on.”

Jamie and Edie had had to arrest an unfortunate woman. The woman in question had been arrested for noncompliance after she refuses to leave her apartment after she had been evicted however she told the arresting officers that she had lived there since the seventies and hadn’t wanted to leave her home. But Jamie and Edie weren’t the positions to give her back the apartment and so they had to follow through on the arrest however the Archbishop had later stopped by Frank’s office and he had wanted to do something for the woman. He told Frank that the building used to be owned by the diocese and that they had had to sell it recently. So he felt the arrest was his fault.

The Archbishop blamed himself for putting someone in their golden years out on the street and had told Frank that he thought an arrest on top of an eviction was adding insult to injury. But Frank said he would look into the matter and he found out the case was much more complicated than what the Archbishop let on. He found out the woman had been throwing stuff out of her apartment window and that people could have gotten hurt if she had hit someone. So Frank wasn’t sure about what he could do in such a case and he already had his hands full with the new Mayor now demanding the Commissioner get an official portrait.

Frank thought a portrait was unnecessary and had even asked if the artist involved was somehow connected to the Mayor. Like a niece or a nephew. But one of the reasons Frank doesn’t want to go ahead with the portrait because he had been told that it was for the Mayor’s office. The Mayor had wanted a portrait of all the commissioner to decorate her hallways and Frank said that was ridiculous because it’s not like she had anything to do with hiring any of them. So Frank was dealing with that while his children were facing their own problems. Erin had been accused at lunch of killing someone and she found out it was because she sent the woman’s husband to prison.

Erin had tried a case against Norm Gower and he had been found guilty. But his wife Bev had said the jury would never have found Norm guilty if Erin hadn’t convinced them. She said Erin had accused her husband of playing an innocent when he really had the face of the devil. So Bev told Erin that her closing argument had been so convincing that even Norm had thought it was good and so Bec that’s what convinced everyone to send an innocent man to prison, but Bev kept calling her husband dead and he wasn’t dead. He had recently been released from prison and Bev said that he was dead on the inside because of what Erin did.

But Erin started to second-guess herself after she found out the date she tried Norm Gower. It had been the same day that she and her ex-husband had signed the divorce papers and that meant she had been in a bad place. Erin had questioned her mental state on that day and she wanted/needed to know if she had let her own personal issues blind her in court. So she talked to Nicky about the divorce and Nicky had said not much had changed. The young woman had been a kid at the time and therefore the divorce hadn’t made much of an impact though she did remember how her mother was during that time.

Erin had gone around acting so happy one moment and then devastated the next. But Nicky had asked her mother why she was asking about all of that and had later told Erin that she didn’t believe she could make a mistake. Nicky told her mother that it wouldn’t have mattered what was going on in her private life because Erin always did the right thing and listened to the victim. So Erin thought it was best to go question the victim in Norm’s case. It had been a young girl that knew both Norm and his wife and she said that Norm had beaten her up. She had told the police, her neighbors, and even Erin that Norm did it. And she lied.

Tina Araya had admitted the truth when she saw Erin again because she knew that Erin must have found out. She said she had told everyone that it was Norm because she hadn’t wanted them to know it was her boyfriend Max. Max and Tina had been heavily into drugs and he had gotten mad at her that day when she didn’t score. But the neighbors heard the commotion and raised the alarm. So Tina lied because she thought they were in love and it turns out he dumped her six months later. And so that’s when Tina decided to get clean because she realized what she had done to Norm and had wanted to believe in herself the way Norm had believed in her.

Which was a crime by the way? Tina had perjured herself on the stand and had also lied to the police. But Erin realized what she had done and tried to make things right. So Erin was fixing her mistakes while Danny had investigated a basketball player’s overdose. The guy, Roland Jeffries, had been in town for an awards show and had had a little party on the night he died, however, he couldn’t have taken the drugs in his system willingly. The drugs they had all expected to find were cocaine or maybe even heroin and the drugs in his system were drugs meant for people stricken with cancer. And it didn’t give off a high!

But Danny and Baez traced the drugs back to the pharmacy and they found out it had been sold to a woman with cancer. It had been sold to Mrs. Vickers and she was related to Darla Vickers who had been the receptionist at Rolan’s hotel. So they had gone to the house and had spoken to Mrs. Vickers except she couldn’t remember taking the drug. She said her other medication make her forgetful and that it was Darla that was in charge of it all. And so they went to go ask Darla and had had to run after her after she took off. She knew she was about to be caught and had wanted to die rather than go to prison which luckily Danny talked her out of.

Danny had been asked the other day about what would happen to the kids if Danny died as well and that had made him act extra careful on the job because he had been sacred about leaving his kids. But Danny knew that they needed him and that Darla’s son would need her. So he asked her what happened and she told him everything. Roland had come to New York the same time last year for the awards and he had slept with Darla, but Dalra had also gotten pregnant and she had called Roland to tell him about it except he hadn’t wanted to know. He had his lawyer threaten Darla into not contacting him or revealing he was the father of her baby. And so Danny sympathized.

He knew Darla must have been hurt by the rejection and having to bring up her baby by herself with a sick relative she also had to take care of. But Danny told Darla that her son would still need her even if she did go to prison. So he talked Darla into turning herself peacefully and then had a conversation with his own son afterward. Danny had realized that he should have comforted his son when he came to him with questions and so he tried to remind the boys that they would be alone. He knew he should make things official yet his sons were always going to be surrounded by family and know they would be taken care of.

Now Frank managed to take care of both his problems by getting Ms. Slaughter off on the charges and hiring the artist to do his official portrait. He had apparently met her back in the seventies when she had gone locked out of her apartment and had gotten drunk at a bar. But what helped him to remember her had been the fact she had kissed him. So Frank had thought at the time that many like her were coming to New York when it was so dangerous because they were like lambs to the slaughter. And that hadn’t been a pleasant thought though Frank had sort of crush on Ms. Slaughter and had no problems with also trying to talk the diocese into leaving her building alone.