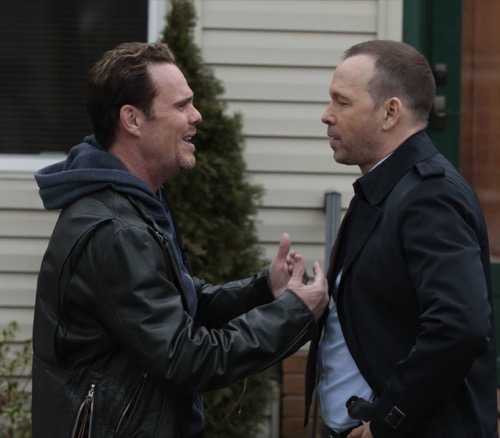 Tonight on CBS their hit drama starring Tom Selleck Blue Bloods airs with an all-new Friday, February 17, 2017, episode and we have your Blue Bloods recap below. On tonight’s Blue Blood Season 7 episode 16, as per the CBS synopsis, “Linda’s brother (Kevin Dillon) asks for help from Danny (Donny Wahlberg) after he lands in trouble with the mob. Meanwhile, a lawyer whose client was wrongfully arrested wants police officers’ disciplinary records to be made public; and Nicky accompanies Jamie on a ride-along.”

Danny had a problem on his hands. His brother-in-law was back in town after two years away and the troublemaker had nearly gotten arrested on his first day because Danny’s neighbors had called the cops on him. They had apparently thought that Jimmy was casing the house and they hadn’t been that far what with Jimmy walking around the house as well as looking through the windows. But Danny had decided to let everything go. Jimmy was family and so he had cleared him with the arresting however he too hadn’t liked it that Jimmy was back.

Danny has known Jimmy most of their lives and he even liked him on occasion. However, he knew that Jimmy would find himself in trouble before long and that it was his duty to clean up after him because he was married to Jimmy’s sister who was grateful by the way. Linda had known that Danny was taking on a lot by stepping in for her brother and she had thanked him after she got home from work. So she didn’t have any illusions about Jimmy and she didn’t exactly trust him to be a good influence on the boys yet neither had wanted to kick him out right away.

Yet, Jimmy did test their patience. He had given the boys a beer and had also taught them poker though he had forgotten that the boys weren’t twenty-one and that they shouldn’t be up all hours learning on a school night. So the couple had seriously considered throwing out Jimmy and the only reason they hadn’t was because Jimmy had gotten into trouble again. Jimmy had told the couple that he had gotten in trouble with a few guys that were more breaking the knee caps type of guys and that they had been camped outside. Just waiting for him to leave.

So Danny had tried to fix things for Jimmy again. He had gone outside and he had spoken with the men camped out in the SUV, but they had told him that they weren’t backing down because Jimmy had gone too far. Though the men had been respectful. They had told Danny that they understand his position and that they wouldn’t be hanging around if Jimmy hadn’t put their boss in ICU. And so that had surprised Danny. He had been told that Jimmy had merely gotten into a fight over a girl and so Jimmy had clearly left out a few things.

Danny however had gotten enough from the guys called Lenny Sick and Steve Angels to know that Jimmy couldn’t stay at the house anymore. Danny and his wife had their children to think after all and they couldn’t put the boys at risk. So Jimmy had gotten the boot in the end and Danny had personally driven him to a No-Name Motel where he could hide out for as long as possible. But they probably knew that Jimmy would be calling for help again and so he was going to have to find it one way or another. And Frank had had his own problems to face.

Frank had found himself in a PR nightmare. One of his officers had apparently arrested the wrong man because he thought the rapper Osvaldo V or OV as he likes to be called had looked like a gangbanger that he was looking for. However, the police officer had arrested OV in the middle of a presentation that had a ton of witnesses including OV’s lawyer Guerraro. So Guerraro was looking through the police files and finding dirt on whoever he could because he believed the police went too far.

He and his client had been a fundraiser event for Downtown Youth Services and OV had personally give away a hundred thousand dollars because of what the center had done for him. So both men were trying the police in public because they believed OV had been profiles as a young Latino. Yet, Frank had also had some things in his past that he wasn’t proud of and he had been shocked to find out that one of his old files was missing right as he was about to be called to the stand. And so Frank questioned that.

Frank’s father had been the commissioner when the incident in that file happened and so he had wondered if his dad had gotten rid of hit. Though Henry had later denied that he did. He said he would never have done such a thing and so Frank had to assume that the file was lost when everything was updated to digital. So Frank had made sure that the truth still got out by calling on the supposed victim himself and had him stand up in court to state that he was on PCP and had fell down the stairs accidentally while he was in Frank’s custody. And that Frank hadn’t pushed him.

Which was the truth and did ensure Frank’s name wasn’t dragged through the mud. But it turns out that Jimmy didn’t need anyone to rescue him. He had finally realized that his actions had consequences and so he had wanted to own up to that because he didn’t want his sister or nephews under constant surveillance if he ran away. So Jimmy turned himself in and he had gotten the life beaten out of him however he survived it and the incident would hopefully keep him honest in the future.

However, Nikki experienced something that she never wants to relive. She had gone on a ride along with Jamie and his partner and she had met an abused woman. So Nikki had tried to help the woman because she realized that the police had their hands tied if the wife didn’t want to make a complaint yet Nikki had made everything worse by continuing to go by the house. The husband had unfortunately found out about it and he had been beating his wife when their son stepped in to stop him. And now the boy who was 12 was in juvenile hall for trying to protect his mother.

So Nikki had found out that the real world didn’t always have problems that could be solved!