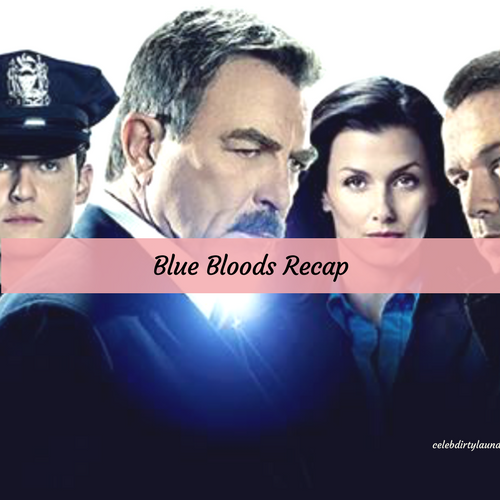 Tonight on CBS their hit drama starring Tom Selleck Blue Bloods airs with an all-new Friday, April 7, 2017, episode and we have your Blue Bloods recap below. On tonight’s Blue Blood Season 7 episode 19, as per the CBS synopsis, “Erin opposes her ex-husband in court when he represents someone she’s trying to convict of murder. Meanwhile, Danny and Baez investigate a husband whose wife was murdered; Frank deals with a bereaved mother; and Jamie rides with a new partner.”

Frank was ambushed at an event. He thought that he was just going to go to another fundraiser and meet a few politicians that had wanted his ear however there had been this woman that approached out of nowhere and she accused him of ignoring her. Shelley Wayne said that she had lost her son Charles and that the NYPD weren’t investigating his murder because they thought of him as another statistic. But Shelley didn’t wish to talk calmly discuss the issue with the commissioner because she was too busy yelling at him for allowing her son to die on his streets. So Moore stepped in and had gotten a few officers to arrest Shelley on a public disturbance charge.

However, Shelley’s story and what she had to say about the commissioner was quickly picked up by a few media outlets. So there was no way of ignoring her and Frank’s team dreaded the press. Moore had did some digging into Shelley and he had found out that she was part of this group for mothers that have lost children in her area yet Moore thought that Shelley wanted her fifteen minutes of fame while Frank didn’t agree. Frank had actually wanted to find out more about her son because he thought her group was something no one wanted to be a part of unless they truly needed it.

So Frank had gotten his team to go to work and Gormley came through for him. Gormley later found out that Charles had been murdered in a drive-by and that at the time of his death Charles was also being initiated into the Kings which was a known gang in East New York. Yet, naturally Shelley hadn’t mentioned that part when she spoke of her son and so Moore had crowed about it. He thought that Charles had been murdered because of gang activity and that their work was done though again Frank hadn’t felt comfortable about where Moore wanted to go. He thought they should still discuss the issue without rushing to judgment.

Jamie on the other hand, had had a problem with instantly thinking the worst of his new partner. He thought that Brenda Patimkin was a punishment from IA and so he went out of his way to be nasty to her which wasn’t like him. But Jamie played a few tricks on Brenda and he didn’t start acting like a professional until they came across Demarkis. Demarkis was a known offender that typically had drugs on him so Jamie went after him and Brenda surprisingly made the collar before him. So Jamie allowed Brenda to take the lead with the arrest and he told her to keep an eye on the young criminal while he checked the scene. And, unfortunately, Brenda had ignored those orders.

She had seen a man walking his dog and not cleaning up after it. So she tried to fined him for his minor offence and she took her eye off of Demarkis so Demarkis ran away while she had been busy. Yet, she hadn’t known about it until Jamie returned to the car and had asked where Demarkis was so she had been completely clueless though Jamie hadn’t been prepared to let of an arrest. He took Brenda back out onto the streets to look for the young man and he didn’t want to give up the search even as Bredna started to lose hope. She thought that they should just give up because Demarkis could be anywhere and so she had been shocked when Jamie actually found him.

Jamie had gone to one of Demarkis’s old hangouts and he had found him smoking weed for all to see. Though Jamie and Brenda had later talked and Brenda mentioned that she had lied on her application to the police academy. She said that she didn’t tell them that her mother had been frequently arrested for DUIs or that her brother was an addict that steals in order to buy more drugs. So Brenda hadn’t been prepared to arrest people that reminded her of family and Jamie sympathized with her. He still didn’t particularly care for her, but he was willing to stand up for Brenda when his serg asked him if he was ok with riding with an IAB mole.

But Jamie decided to stay partners with Brenda rather continue to fight about it and he hadn’t been the only one to make a peace with something that was once forced on him. Frank had looked into Charles’s case and he had even found the killer. So Frank had tried to tell Shelley that the man that killed her son was behind bars and that he hadn’t meant to kill Charles because he had been aiming at someone else however Shelley said that still didn’t make up for the way the police ignored her community. She said her group host several rallies and the police never show up because they just didn’t care.

So Frank had talked to his family at Sunday dinner and his murder case wasn’t the only one that had everyone quiet at the table. Danny had sadly had to arrest a man that had killed his wife because she asked him to. She was apparently dying of pancreatic cancer and hadn’t wanted to drag out her death so she had asked her husband to do it and hadn’t been able to say “no” to her. However, Danny didn’t believe Brian Copeland should be in jail and hated the fact that he was probably looking at fifteen years behind bars yet Erin had also had a case in which she went up against her ex-husband that was representing the defendant. And to make things worse, Jack brought his girlfriend along.

Her name was Mandy and she was twenty-five so that had the Reagans laughing about Erin’s predicament. Yet, Erin lost her case because one thing after another kept going wrong and she hadn’t been shared when Jack told her he broke up with Mandy. She had just cared about justice. Jack’s client had gotten off and he later followed Erin to a bar where she was meeting Danny because he had wanted to her that she was right. He had killed someone and he hadn’t regretted it though there was nothing that Erin or even Danny could do about it. It was merely he said, she said and the case had already been dismissed. And so Erin had gotten scared.

Erin had been shaken by the fact that she had been follow and hadn’t noticed. So she didn’t want to cross paths with that defendant ever again, but Frank who had needed time to think had finally went to one of Shelley’s meetings with her group because he realized he should have supported them.