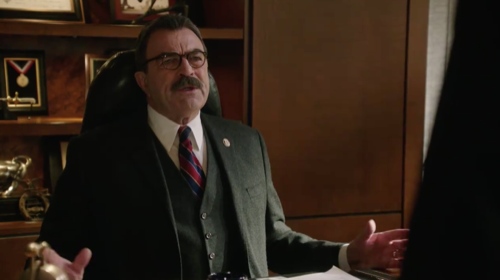 Tonight on CBS their hit drama starring Tom Selleck Blue Bloods airs with an all-new Friday, January 6, 2017, episode and we have your Blue Bloods recap below. On tonight’s Blue Blood Season 7 episode 11 winter premiere, as per the CBS synopsis, “An adoption case gets complicated for Jamie (Will Estes) and Eddie, so they want Erin’s (Bridget Moynahan) assistance to prevent the case from going to court. Meanwhile, Frank investigates reports of cadets cheating on psych exams; and Danny (Donny Wahlberg) learns of Jack’s plan to enter the Marines.”

A dozen cadets at the Police Academy had apparently cheated on their psych exams. Lt. Sid Gormley had been the one to bring the news to Frank’s attention however he and fellow adviser had later argued about what should be the commissioner’s next response. Gormley felt the cadets should just be thrown out because what mattered to him had been the fact they cheated. But Garrett hadn’t like how it would be seen. The cadets that had cheated hadn’t been anyone off the street. They had actually been military veterans with seven of them from the army and five from the marines. So Frank had wanted to talk to the sergeant in charge of the cadets.

However, Gormley had had something to say about the sergeant as well. The sergeant had said the situation wouldn’t have been a problem if the other cadets hadn’t reported it. So Frank had wanted to Daniel Vega to explain that to his family though unfortunately Vega hadn’t wanted to show up at the meeting alone. Vega had brought along Cadet Martin Smith who had been a marine that helped get around the psych exam and Vega had said that he brought along the younger man to put a face to what was really going on. And according to Vega, the reason he had helped the veterans cheat had been because the current exam was designed to exclude veterans.

Martin Smith had said one exam question had been if he ever shoot someone intending to harm them and Martin had explained that if you answered yes then you fail the exam. Though Frank didn’t care for that excuse. Frank had said that as a former marine himself that he would never have lied and he would have thought that Marine wouldn’t lie as well. So Frank felt that if there had been a problem with the exam that’s someone should have reported it to his office rather than take things into their own hands. And so he had Vega reassigned because as his eyes and ears, Vega had left deaf and blind.

So Frank had decided that he and his office were personally going to look into that matter and that Martin wouldn’t know his decision until graduation day. Yet, Frank had been upset by what was technically happening under his nose and he had felt disappointed with everyone involved, but Martin had come back to Frank’s office. Martin had wanted to speak in Vega’s defense and so he had tried to explain that Vega hadn’t helped them cheat. He hadn’t given them any answers and Martin would have gone more in Vega’s defense if Frank hadn’t cut him off. Frank had asked Martin what had been his duty as a Marine. And so Martin told him.

Martin had said that he was to protect his brothers and keep his head down as much as possible. But Frank had asked the question because he had wanted Martin to remember the values he had been taught. Frank wasn’t really one for lecture however he liked to know that someone knew the differences between right and wrong and he had taught his children that same value. Erin and Jamie had gotten mixed up in a custody battle. Jamie had been responding to a 911 call when he found out that the biological parents of an adopted child had wanted to change their minds. The bio parents had believed they made a mistake and so they had wanted the little boy back.

However, the little boy wasn’t that little. He was five-years-old and didn’t know what adoption meant much less that his parents had adopted him. So the adopted parents had wanted to keep the bio parents away. They said they would tell their son when he could understand the situation and that he was free to look for his biological parents when he was an adult though in this case everyone thought they knew what was best for the child. Including Jamie who was supposed to be responding to a trespassing charge and who instead offered to help the Reddings who were the biological parents.

The Reddings had said they didn’t understand what they were giving up yet Erin had bene brought in on the matter as a lawyer and she told them that they had signed the papers for a reason. So she asked them to simply remember those reasons because unless there was something wrong with what they signed then the Rices were Kyle’s parents. Though the Reddings had reviewed the paperwork and they realized there was a loophole that meant they could get their son back. They had apparently given their son to a married couple and that couple had been separated by time the adoption had occurred.

So there was a chance the Rices could lose custody, but Erin’s personal involvement had led to her talking to the other side and she had eventually convinced Gwen Rice that she should reach a compromise with the Reddings before she did anything that deemed her unfit. Yet, Erin had gotten the message across. She had realized that Gwen’s husband had wanted the baby for her and so she knew that Gwen was the one to convince. And she had done that by reminding her that there was someone across the table that knew exactly how she felt regarding what was best for Kyle.

Frank however had reached a compromise of his own. He had gone to a meeting for the veterans and he had asked not to be told who cheated. So Frank was doing his best and his best might mean that the veterans won’t be booted out from the academy. But for a second, his grandson Jack had thought about joining the Marines before he had second thought and realized that he had wanted to go to college.