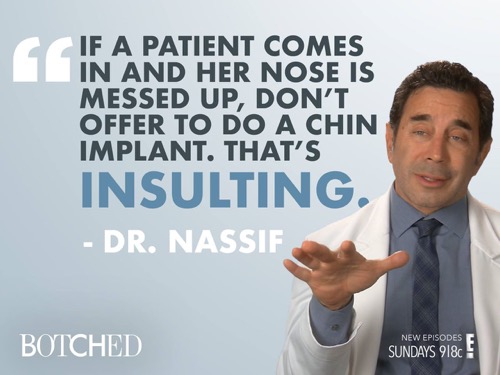 Botched continues tonight with an all new Sunday, June 25, 2017,  season 4 episode 2 called, “Comic Proportions” and we’ve got your Botched recap down below! On tonight’s season 4 episode 2 per the E! synopsis, “A cosplayer meets with the doctors to make her body more comical. Dr. Dubrow helps a woman whose previous plastic surgery left her with a heart on her butt, while Dr. Nassif operates on a woman who had her nose ruined over 30 years ago.”

Connie is twenty-seven and on tonight’s episode of “Botched” it was revealed that she had something called “Hearty Butt”.

The “Hearty Butt” came about after Connie was feeling self-conscious about her weight after having a baby and had gotten plastic surgery because she thought that would help. But the doctor had botched Connie’s surgery. He had taken all the fat from Connie’s liposuction and had injected into her butt however it developed into something resembling a heart shape. So at first the doctor had wanted Connie to wait and see in case the butt was just swollen and, when the butt still seemed to be heart-shaped, the doctor had decided to go in again.

However, the doctor had gone ahead to repeat the same procedure without fixing what was clearly a problem. So that didn’t change the shape of Connie’s butt. It remained heart-shaped and Connie felt ashamed of what that doctor did to her, though with a couple of years to think about things, Connie felt that she was ready to brave surgery again and had gone to Paul and Terry to see if they could help her. And the guys truly wanted to help. Just Connie’s situation turned out to be worse than anyone thought.

Her previous surgeon as it turns out had been completely unethical and he made things worse than it had to be. The doctor had made Connie wear a yoga mat as a compression belt after she had liposuction and he had also told Connie to wedge her butt in between two books so that it didn’t lose shape. Though that advice had been some of things that changed the shape of Connie’s butt and so Terry was worried about performing surgery on her. He couldn’t get rid of all of the fat in her butt or it would leave her with nothing.

So Terry’s surgical plan had eventually been to gradually lipo the fat out of Connie’s butt. He started by removing 500 CC from each butt cheek and then he did his best to give Connie something that would naturally fit her body type however there had been more fat than he could have guessed. Terry apparently remove more than 1600 CC from one and 1400 CC from the other butt cheek before he came across some elasticity problems in which the butt was struggling to shrink from its former position.

All that fat, after all, did stretch her skin. But Terry managed to get through the surgery and he felt confident about his work. So Terry was there when they had another consultation. That time around they had met Bunny. Bunny was very into Cosplay and she had gotten surgery at eighteen in order to feel more like her favorite characters though Bunny has gone a little too far with trying to get what she wants. She first got 850 CCs and that had caused a complication except she had gone on to get a bigger size after that surgery because she didn’t want her breast to look real.

Only Bunny still wasn’t satisfied after her second surgery. She had gone up to 2000 CCs, but still wanted to get more because people still asked her whether or not her chest was real and she didn’t want that confusion. So Bunny had asked Terry to give her a bigger size and he had firmly told her “no”. Terry had said that her skin was stretched as it could be and that she should actual remove her implants to give her body a rest. However, Bunny didn’t want to be told to stop or that she was risking her life. She had this dream in her head and wouldn’t let it go despite what she had been told.

Though thankfully Paul’s next patient was a lot easier to handle. Paul had apparently fixed a twenty-year-old nose job after it continued to cause problems for Tracy. Tracy had gotten a nose job when she was sixteen because she felt like she had too much of a Jewish nose and it didn’t fit her face however her nose began to cause her problems in college and it just got worse from there. It somehow started to collapse on its own and the cartilage in her nose eventually gave her two horns on the tip.

So what Paul had to do was rebuild the nose as well as fixing the sloping effect that her “Twin Peaks” were giving her. But in the end, she had a new nose and she could breathe normally again therefore it was easier going out again. Tracy felt confident to go hang out with her friends and even go on a hike afterwards yet fixing something that took twenty years in the making hadn’t been easy for Paul. He essentially had to recreate a nose for Tracy and the healing did take some time. And so it was great that it all turned out for the best.

And while the doctors weren’t able to help Bunny, they more or less performed miracles for Tracy and Connie.

Connie’s butt was no longer numb and she fit into her old jeans again.