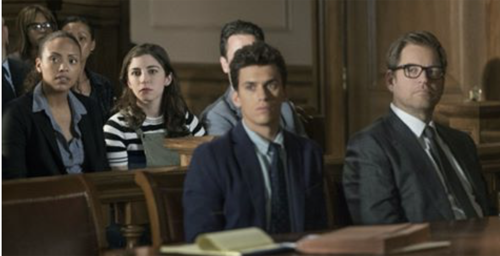 Tonight on CBS their  drama Bull inspired by Dr. Phil McGraw airs with an all-new October 3, 2017, episode and we have your Bull recap below.  On tonight’s Bull season 2 episode 2 as per the CBS synopsis, “Bull (Michael Weatherly) and Benny clash when they represent a young man who is charged with murder for helping his terminally ill girlfriend end her life, which goes against Benny’s religious beliefs.”

Dr. Bull and Benny are in court waiting for their case to start and hear the case of Adam Harris. Dr. Bull jumps up and offers Benny to work as Adam’s lawyer. Dr. Bull can tell he is a good kid in a bad situation. Dr. Bull and Benny go to Adam’s house and offer to find a good lawyer for him. Adam tells Dr. Bull he loved Emily and took her out of the hospital because she asked him to. He had no idea she was going to kill herself. The press show up at Adam’s house and he wants to tell them the truth about what happened. Dr. Bull stops him and says he and Benny are part of the legal team defending Adam.

The team watches the video Emily posted on her account right before her suicide. They have to prove that Adam was only helping Emily. She had stage 4 brain cancer and didn’t want to undergo the operation her parents wanted her to have. It would have prolonged her life for a couple of years but would have taken away her personality. She wanted to have one last night with Adam and then to die peacefully. Dr. Bulll and the team have to find a jury that can put themselves in Adam’s shoes.

Adam tells Dr. Bull that he had no idea Emily has the drugs in her purse and everything was her idea. Benny is a Catholic and thinks what Adam did was wrong. He will not defend Adam. Dr. Bull convinces him to do it but lets it slip in front of Marissa they are not getting paid for the case. She is furious. Cable studies Emily’s online profile looking for information that can help Adam.

Dr. Bull and the team discuss the case and are divided about if Adam’s action equal murder. They decide they need a jury that is not too black and white. They need people who can see gray. As they conduct the interviews they struggle to get the right combination. The jury is finally seated and Adam sees Emily’s parents as he leaves the court. Emily’s mother yells at him that he is a murderer.

Dr. Bull questions Adam and learns he abused opioid pain medications when he was younger. Emily’s parents will use it against him. Dr. Bull decides the team needs to look at Emily’s parents more closely. The trial beings and the prosecutor describes Adam as a stocker and druggie. Dr. Bull’s investigator finds the girl that Emily was texting before she died and learns that she had the same operation Emily was scheduled to have. The girl is now a vegetable.

Benny calls the doctor who was going to do Emily’s surgery and he says Emily told him he did not want to have the operation. Marissa tells Dr. Bull they are making leeway with the jury. Cable learns that Emily and her dad were seeing a therapist behind Emily’s mom’s back. The therapist specialized in end of life issues. Benny decides to call Adam to the stand. He tells the jury that he took Emily to see her friend who had the operation and she was very upset after the visit.

Benny then calls Emily’s father to the stand. He says he knew Emily wanted to kill herself and a bottle of Fentanyl went missing from his practice a week before Emily died. Benny makes his closing arguments and Adam is found not guilty.