Celebrity Big Brother US Casting News: Latest Contestant Buzz – Who Will Be On CBBUS? 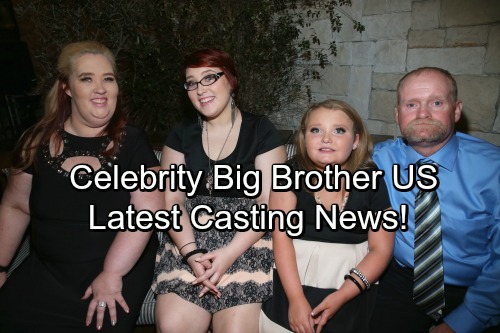 We have to be realistic about our casting expectations for Celebrity Big Brother USA. We can definitely state that no high-profile celebrities will be entering the house come winter. So don’t expect Jennifer Lawrence or Ronald McDonald to be a contestant on Celebrity Big Brother US. The rumours on the street – the street being Twitter – are interesting and worth checking out. There’s names being tossed around like an angry salad chef would toss around your tomatoes. We already covered a few of them, but there’s more! After thorough investigation – I feel like I’m on an episode of Murder She Wrote – we found a few names which might just stick.

The talented star of ‘The Office’ recently replied to a tweet about her involvement in the project and said that she’s not going into any house. But the Celebrity Big Brother US house isn’t necessarily a house. Is Jenna Fischer toying with us? Did she mean that the Big Brother house is more a set than anything else? This ‘The Office’ alum will be a welcome addition to the group. She’s also a BB superfan, so there’s that.

The is some Internet buzz about Mama June from Honey Boo Boo fame being involved in the project, and a strange tweet surfaced stating that Mama June would be interested in going into the house. Now I don’t know about you, but imagine this woman playing for Head of Household or giving someone the Power of Veto! It’ll be a raucous laugh-a-minute. Is she in? Is she out? Maybe.

SOMEONE FROM “TEEN MOM”

We know how reality television shows like to recycle their “contestants”. Interestingly, the cast members of the Teen Mom series have gone on to great success in the past, so I wouldn’t put it past CBS to get some MTV lifeblood in the series. Admittedly it would be boring to watch a Teen Mom parade through the house like Bjork at a nudist camp, but we’re not watching a parade; we’re watching a competition! Can someone from the Teen Mom series be able to influence the game on an impactful level? It’s quite possible, but don’t count your little Celebrity Big Brother US chickens before they’ve hatched.

Soap star, reality television star, Lisa Rinna has done it all. She featured on The Celebrity Apprentice twice and is now a regular on Real Housewives. This infectious and gracious contestant could be CBBUS’ biggest player ever. She knows how to keep her cool under stressful situations. The woman worked with Gary Busey… Enough said.

Speaking of Gary Busey, my favourite celebrity in the entire world (globber, globber, blah, blah, G-A-R-Y stands for Good Action Reality Yes!), would be the most fascinating addition to the cast. He is half past insane and he loves being a reality television star. After several stints on Rehab with Dr. Drew, Gary went on to become an infamous and strangely charming contestant on The Celebrity Apprentice. No one knows what he says, nor can we understand his madness, but Gary Busey would just be the greatest thing since sad people.

Oh. My. Gosh. The biggest reality television villain in history could turn the Big Brother house upside down. Not only did she create drama on three seasons of The Celebrity Apprentice, but she also took that drama and created a villainous image of herself, even going so far as to blast Wendy Williams on HER OWN TALK SHOW! Currently, Omarosa works for President Donald Trump. But hey, she can move from the White House to the Big Brother house faster than you can say Julie Chen!

The Celebrity Big Brother US cast is by no means complete. The names above are either speculation, Twitter buzz, or a combination of the two. Who do you think should be on the show? We need villains and people we can root for. Who would you cast as a villain? Who would you cast as an underdog? Let us know your CBBUS thoughts in the comments below.