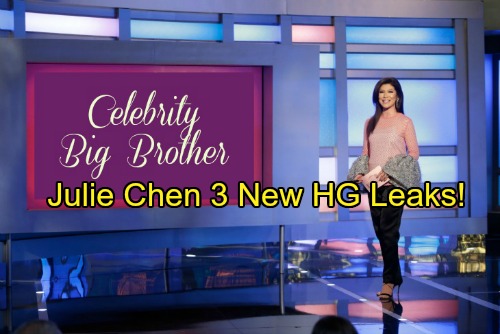 Celebrity Big Brother USA spoilers tease more of the cast may have been accidentally leaked. After Big Brother 19 wrapped, host Julie Chen chatted with the press and may have disclosed a few juicy tidbits.  Read below to find out what she said.

Julie revealed that she’s “expect” we’d see Lindsay Lohan on the Winter season. She said that a part of her wants to see how Lohan would react to the pressure cooker lifestyle in the Big Brother house.

Another name she disclosed was Motley Crue drummer, Tommy Lee. While she isn’t sure who is in the cast; however, Chen had heard he showed interest. Lee would be very interesting. He is the type that says whatever is on his mind, so to put him inside the BB house would be instant fireworks.

Lastly, Chen said that they really cannot have a Celebrity Big Brother without Gary Busey, laughing that he would be live feeds gold. She wondered if maybe Tara Reid would pop in, as well.  Some of these names are probably her “dream cast,” but, what if, a few on her list ends up joining the cast.

Several weeks ago, CDL reported that NSYNC’s Lance Bass signed on to compete in CBBUS.  As it turns out, that may be true.  Julie teased that two NSYNC band members have reached out to join the show.

Big Brother showrunners revealed that on Monday they will be putting the Celebrity edition together.  They will be reaching out to celebrities who shown interest and begin the casting process. It shouldn’t be too long before they give an official cast role out and announce the premiere date.

As for when Celebrity Big Brother US will debut, Julie said to expect it in early January. Many expect the series to run for 35-60 days, much shorter than the 90-100 day standard for the Summer edition.

Who would you like to see on Celeb Big Brother US? Stick with CDL for more Celebrity Big Brother US spoilers, news, and casting updates!