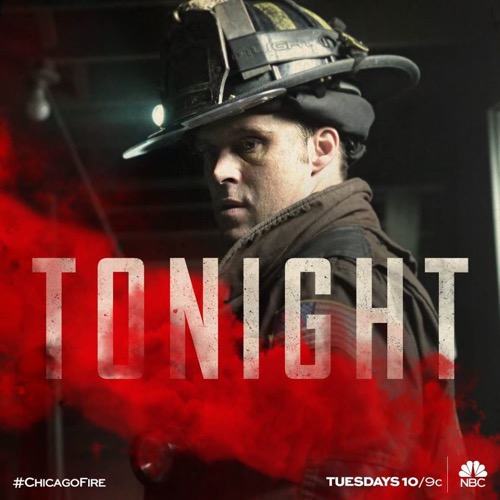 Tonight on NBC Chicago Fire returns with an all new Tuesday, January 24, season 5 episode 11 called, “Who Lives and Who Dies” and we have your Chicago Fire weekly recap below. On tonight’s Chicago Fire episode as per the NBC synopsis, “Dawson (Monica Raymund) has difficulties keeping her emotions in check during a run with a pregnant teen; Casey (Jesse Spencer )makes a split-second decision at a fire scene when two victims both need life-saving assistance; and Severide (Taylor Kinney) and Anna (Charlotte Sullivan) bond during her recovery.”

Tonight’s Chicago Fire season 5 episode 11 looks like it is going to be great and you won’t want to miss it.   While you’re waiting for our recap make sure to check out all our Chicago Fire recaps, news, spoilers & more, right here!

Chicago Fire begins tonight with Gabi Dawson (Monica Raymund) waking up at 3a.m. to Matt Casey (Jesse Spencer) clearing out little Louie’s stuff from the bedroom, converting it back to a guest room. Both Gabi and Matt are having a hard time adjusting to Louie being gone.

Kelly Severide (Taylor Kinney) returns to work after donating bone marrow to Anna (Charlotte Sullivan). Matt arrives at the Firehouse 51 and is angry when Christopher Herrmann (David Eigenberg) announces there is a rat in their kitchen. Matt orders everyone to clean everything from top to bottom.

Gabi and Sylvie Brett (Kara Killmer) are called to a park where there is a class trip. The young girl Darla is laying on the floor when Gabi discovers she is pregnant and having contracts; the girl is in shock not even knowing she was pregnant. They learn that they can’t transport her because the baby is on its way, but the baby is breech.

Gabi guides her with the breathing as Brett attempts to turn the baby; but the entire baby comes out with her head stuck inside. Gabi cuts the cord as Brett helps the baby to breathe, its a healthy little girl.

Herrmann, Randall “Mouch” McHolland (Christian Stolte), Stella Kidd (Miranda Rae Mayo) and Brian “Otis” Zvonecek (Yuri Sardarov) are busy cleaning the kitchen when Matt comes in and demands they work faster, pulling out the fridges and stove too. Matt cuts open the third watch’s locker and tells them to clean it all out, ordering them to do as they are asked so they don’t have to do it a second time.

Herrmann chases after Matt, asking him if he needs to talk. Matt hands him money telling him to buy every rat trap the hardware store has. Matt walks away, telling him to get it done and not interested in sharing what he is feeling.

At Chicago Med, Darla’s father arrives and is furious she just had a baby. Gabi tries to calm the father down and tells his daughter she has no business raising a baby. Brett tells Gabi to stay out of it, but the father tells Darla if she wants to keep the baby, she can live with her aunt and she has humiliated him enough. Gabi attempts to comfort her.

Severide comes to the hospital to visit Anna and finds her walking the halls, learning she should be released by the end of the week. He wants to know what happens then as they joke about how slow she is walking.

Back at the firehouse 51, Herrmann gets his thumb stuck in a rat trap. Gabi returns from the tough call and just as Matt is asking her how she is doing, he snaps and yells at Herrmann about the rat traps. Gabi tells him to nevermind and leaves to get supplies; things are tense between them.

Severide finds Stella by the trucks working on opening doors, she admits as long as she looks busy, Matt won’t force her to clean urinals. He tells her Anna was asking about her and wanted to thank her for being there for him through the bone marrow procedure. They are interrupted with alarms for a structure fire.

The firefighters enter the building believing there are people left inside the structure. Matt is trying to pull a man out from the rubble and he is punching him. Chief Wallace Boden (Eamonn Walker) orders everyone to evacuate the building, as Matt attempts to leave the man pulls a gun on him. Matt sees the mother and her daughter stuck in the fire and tells the man he will come back, as he leaves the ceiling is fully engulfed in flames. After rescuing the mother and daughter, Severide and Matt go back to rescue the man but the building explodes while they are inside.

Outside the building, Stella gives both Matt and Severide some water. Matt is upset they couldn’t rescue the man; Severide and Stella tell him they saved a little girl and did everything they could. Boden tells Matt that the next time a man pulls a gun on him he is to tell him right away. Matt tells them to grab a body bag and they return to the building.

Once inside, they discover the man is gone. Matt begins to throw everything around insistent he is in the right place. Boden orders Matt to take Truck 81 back to the firehouse. Severide tells him Squad will stay behind to search for him; Boden and Herrmann exchange looks.

Severide meets with Matt and tells him they didn’t find the man nor his body but they will have search dogs to see if they can track him. Matt swears he wasn’t hallucinating and gives the go ahead for the search. Herrmann asks Matt if he wants to go for breakfast and talk about losing Louie. Matt declines the offer.

Stella comes to see Anna at Chicago Med. Anna asks her if she is together with Severide; Stella says they are not. Anna again thanks her for everything she has done for Severide and Stella gets out of her hair.

At home, Matt and Gabi are discussing the man who vanished in the fire; Matt finally admits he feels like he is losing his mind. Matt leaves the dinner table and Gabi tells him she is going out for a bit. Matt returns to Louie’s room, where he finds Gabi’s engagement ring in a box in one of the drawers.

Gabi comes to visit Darla at the hospital, she runs into her aunt who informs her that Darla’s father, Charles raised his daughter by himself, and he has done more for her than anyone. She tells Gabi to maybe stop judging and see the shock through his eyes instead. Gabi apologizes and she isn’t able to see Darla.

Chief Boden tells Matt that there was a small hatch leading to the alleyway, and that is how the victim escaped. Building residents had no idea who the man is and there was nothing left to identify who he was. Matt cannot let it go and Boden tells him there is no rational thought when it comes to this man; the man is alive and Matt should live with that. As he leaves Boden’s office he tells Herrmann to tell truck 81 they are going for a ride.

Matt goes to see the property manager for the building wanting to know about the man living in the basement. He denies that anyone was living there; Matt insists he saw him and wants to find out who the man is because he feels guilty for choosing to save the little girl over him. The man brushes him off and Matt leaves with no answers.

While Brett sits in the ambulance, Gabi comes to see Charles Thompson, Darla’s father. He lets her in and she apologizes for her behavior at the hospital. He shares that he feels ashamed and cannot figure out where he went wrong with Darla. He admits that he doesn’t know what to do; Gabi shares her experience with loving her child and encourages him to do that for his daughter and granddaughter. He begins to cry.

Severide comes to see Anna, he doesn’t want her to go back to Springfield. He tells her there is something between them and they should figure it out. She says she isn’t this sick hospital girl, that she is this adventurous girl. He says he knows that and wants her to stay. She lets him know when she is going to be released and he promises to be there. They share a passionate kiss and leaves on a call.

At the scene, they find a building securely locked up. Severide attempts to open the door and Joe Cruz (Joe Minoso) breaks in one of the windows seeing the victim laying bleeding and still on the ground. Severide uses the bar to yank the door open. Once inside, they are able to find a pulse and transport the victim. Severide smiles telling Stella that her stoneage ways saved the day. He asks Stella if he ever thanked her for being there for him. She tells him he was.

Cruz makes fun of Herrmann, Otis and Mouch for still being stuck on spit-shine duty. Herrmann has had enough and goes to find Matt. Matt dismisses him and Herrmann says he is going to shut up and listen to him. Both Matt and Gabi are standing there waiting for Herrmann to hear what Herrmann has to say.

He tells them when something bad happens, they try to exert some control but sometimes it is better to live with the pain for a little while; process it. Losing Louie was a real blow and there is no harm in them admitting that. Matt asks Herrmann to tell the guys to put the supplies away and order some barbecue on him. Gabi grabs Matt’s hand as they both look on in silence.

Gabi and Matt arrive at the Thompson house where they are greeted by Darla. They bring in a box of things they felt her baby could use. Matt tells her that whoever had them before, loved them and they are sure her baby will love them too. Darla tells them they named her baby Gabby. Gabi asks to hold her, Darla’s father invites them in.

Severide comes to pick up Anna from the hospital and learns she was discharged a half hour earlier. She left a picture of her rockclimbing with a note that says “Someday…”