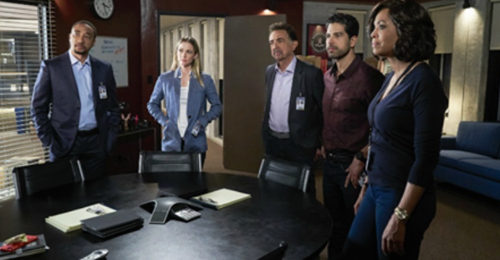 Tonight on CBS their hit drama Criminal Minds returns with an all-new Wednesday, May 10, 2017, episode, called “Red Light,” and we have your weekly Criminal Minds recap below. On tonight’s Criminal Minds episode season 12 episode 22 as per the CBS synopsis, “Season 12 ends with Derek Morgan returning and bringing the BAU a lead in a case against serial killer and escaped convict Mr. Scratch. Meanwhile, Reid faces an old nemesis.”

Reid had to face Cat Adams again. She was apparently the mastermind behind Reid being framed for murder and going to jail however she revealed herself when she was ready and then she had a few requests just for him. Cat had demanded that Reid pay her visit in prison and if he didn’t then something truly was going to happen to his mother. But facing off against Cat was something Reid knew wouldn’t be easy. He had only managed to get the best of her the last time by manipulating the feelings she still had for her father. So Reid knew that couldn’t pull off the same stunt and that if he ever wanted to see his mother again that he had to hand over control to Cat.

However, Cat hadn’t just wanted to see his pretty face. She had demanded a meeting because she had wanted to see Reid’s suffering come close and so she hadn’t been ready to end their game by telling him where his mother was. Instead she had asked him to close his eyes and she placed his mind in a room that they could both enjoy. Like an upscale restaurant where they would both in their best clothes and she would be in a better condition that she was in prison. So Cat was still playing the seductress. She had wanted to Reid putty in her hands and weak to her every whim which was the game she had tried to play on him last time.

Except that hadn’t worked on Reid back then. He had seen right through her and had known that Cat would often find men that wanted to get rid of their spouses and that she would seduce them before carrying out the job because it made her believe that she had power over them. Yet, that had grated on Cat. She had prided herself on being able to seduce anyone and so Reid was sort of the one that got away. He hadn’t fallen in love with her or even thought about her since he put her in prison. So Cat asked to theorize why she might have kept watch over him and done everything in her power to hurt him though he had thought it was because she was in love with him.

She wasn’t! Cat didn’t know how to love anyone and so she revealed to Reid that she had kept watch over him because they were pregnant. She said that she had Lindsey pretend to be the real love of Reid’s life, Maeve, in order to seduce him in Mexico and get a sample of his swimmers. Though naturally, Reid hadn’t believed that was possible. He said she had to be lying and that she just wanted to hurt him, but JJ checked her medical records and Cat was in fact pregnant. She was three months along and the timing lined up with what happened to Reid. So the team had wanted to know why Cat had gone to such lengths as well why Lindsey would help her.

It hadn’t made sense why Lindsey would listen to Cat or why she would want to hurt him just because he had once stood in her way. But Lewis and Walker found out where she was getting her specially made hollow bullets and the store owner had revealed something. He said that didn’t discriminate against anyone and that he had no problem with Lindsey’s fiancée. So the profilers figured out that Lindsey and Cat were once involved before Cat went to prison and that scared them. They knew that the couple were aware that there wasn’t a chance they could ever be together again and that meant they didn’t have a problem with dying.

However, Prentiss had had an idea. She had set up an amber alert with Lindsey as the abductor because she knew people paid more attention that than they did APBs. So Prentiss’s idea panned out when a young man reported seeing Lindsey yet she had killed him and to make things worse she had spoken to Cat. Cat had wanted to prove that Reid’s mother was still alive so she made the phone call to Lindsey and handed over Diana’s proof of life. Then both Cat and Reid heard Lindsey shot at something and that unfortunately set Reid off. He thought they had killed his mother and he had attacked Cat only for JJ to step.

JJ reminded Reid that Cat was pregnant and that they couldn’t hurt her. Yet, he had demanded to know if his mother was dead and whether that was part of the plan all along. So Cat reassured that Diana was still alive because she said she didn’t cheat and that killing Diana off so soon would be cheating though that only went to show that she still thought of it as a game. A game where she could trick Reid into admitting that he’s just like her and that he wasn’t as noble as he thought. So Cat waited until Reid calmed down before mentioning what he did in prison. She had asked him about the men he drugged and if he liked having that control over them.

So Reid did fess up. He admitted that he didn’t regret what he did and that maybe he did share something with Cat, but he had asked her to dance with him and had pretended that the baby was his because he had wanted to capture Cat off guard. He had had the cameras in the room streaming live to Prentiss’s cell and so she had something to show Lindsey when they found her. Lindsey had apparently been waiting in a cabin with Diana and a bomb and she was going to kill them all when Cat called again. Though before that could happen, Lindsey watched as Reid got Cat to confess that she was pregnant and then Reid had said that he knew the baby wasn’t his.

Reid had figured out that Cat had seduced a prison guard by the name of Lionel Wilkins and that she had used her pregnancy to pull Lionel’s strings. So Lionel becoming a guard at Reid’s prison proved that Cat had been keep watch over him and that she had someone in law enforcement that could get his FBI file. But Reid called Cat on all her lies and manipulation because he knew that he had gotten the better of her however Cat didn’t want to lose to him again and so she had called Lindsey with the instructions of blowing up the building. And Cat had been shocked when Lindsey refused to do what she asked because she found out that Cat had cheated on her and was pregnant.

And so Lindsey allowed herself to get taken in and Reid was thankfully reunited with his mother. However, Morgan came back which surprised everyone and he had told them about this strange text he had gotten from Garcia about Reid wanting to meet up with Morgan at a safe house. So the team became aware that someone was setting a trap and they thought it could possibly be Scratch. Scratch would do something like so Garcia traced the text and gave her team the location from where it was originated from yet the team got hit on their way there and there was no telling who was alive or dead!