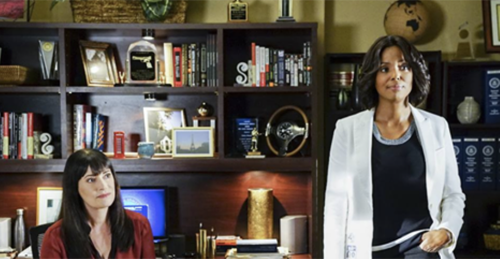 Tonight on CBS their hit drama Criminal Minds returns with an all-new Wednesday, October 18, 2017, episode, called “Killer App,” and we have your weekly Criminal Minds recap below. On tonight’s Criminal Minds episode season 13 episode 4 as per the CBS synopsis, “The BAU investigates a workplace shooting committed by a state-of-the-art drone in Silicon Valley.”

Prentiss had wanted to speak to Alvez alone. He wasn’t in trouble or anything, but he had too light on the details in Mr. Scratch’s case and Prentiss told him that they couldn’t afford not to dot their I’s on this one. She had wanted a full account of what happened and had asked Alvez to go through the story with her. But she hadn’t needed to worry. Alvez said that he had gotten into a shoot-out with Scratch and that the fire escape had given way underneath the other man when he tried to escape. So Alvez had then said that Scratch had asked for help. That he had been unarmed and had been trying to hold on by himself when he reached for help. And so Alvez added the last part.

Alvez said that he had ignored Scratch’s pleas had let him fall. But Prentiss hadn’t been upset because she said Alvex followed protocol and that if he wrote everything he told her down then they could turn that in. So Alvez hadn’t gotten in trouble and he had later boarded the plane when the team responded to a workplace shooting. The shooting had happened at a place called Ori-Gamey in Silicon Valley and there had been three victims of various races as well as various locations in the building however something wasn’t adding up. The Unsub had managed to move fairly quickly throughout the building and not one person had gotten a description.

The eyewitnesses had been all over the place when they later described the “shooter” to the team and each account seems to discredit the other. But that hadn’t been the only thing that hadn’t added up. The police at the scene hadn’t seen anyone and they told Prentiss about the armed guard that had been killed. He apparently did two tours in Afghanistan and would have been trained to shoot upon sight yet the guard had never gotten the chance to shoot his weapon and so that led to questions about there being more than one shooter. And if there had been two people involved that could explain some of the general confusion.

The witnesses could have been talking about different people and with general terror being involved it could explain why no one had gotten a good look at the Unsub. But Garcia had had a pretty good idea about the identity of at least one of their shooters. She had looked in whoever would have a grudge and had found Hugh Fitzgerald. Fitzgerald had recently gotten fired and had blamed immigrants for stealing good jobs from “true Americans”. So JJ and Alvez had gone to question Fitzgerald and he led them on a car chase. He later said that he was afraid of authority, but going on a car chase with his daughter in the back seat hadn’t put him in a good light.

Fitzgerald had made several racist and anti-immigrant comments online that he still needed to answer for. But he wasn’t their shooter. Fitzgerald didn’t have it in him to be anything besides an internet troll and so the team had gone back to looking for suspects. They looked into anyone else that might have personal grievances and another workplace shooting happened while they were looking. The second shooting had happened at a different tech company and that time, even more, individuals got hurt though they had been of various gender and some had even been Caucasian. So that ruled out race as being a factor.

The Unsub hadn’t seemed to care who got hurt as long as a select few had been injured. But Reid had noticed that the only signs of a break-in had been a broken window up high and the shooter would have had to be on the edge to make the shots that he did. So Reid figured out pretty quickly that that shooter hadn’t been a person. It had been a drone that was being controlled by the Unsub and it must have been modified to target the Unsub’s victims however there wasn’t anything that jumped out that seemed to connect everyone that died. The one thing had been that they all were in the tech industry except Reid had also spotted a pattern with the victims.

Reid had noticed that the victims all worked specifically in gaming and that they had each a three-month employment gap in 2016. But it hadn’t taken Garcia long to know why that was. She found out that six of the victims had taken part in a drone program back in 2016 and that they had worked for Peakstone. Peakstone was a military contract organization and they weren’t really military, but they weren’t exactly civilians. So Peakstone had been up to something with their drone program and it had led to Tori Hoffstadt’s kidnapping. She worked for Peakstone and the Unsub had kidnapped her rather than killing her like the others. And so Tori held some importance to him.

Garcia had looked into Tori and she found Tori had run an experimental training group that saw the deaths of over three hundred insurgents in Afghanistan. But the team knew right away that must have been why the Unsub snapped. The Unsub had been a drone operator and it turns out the gamers he killed had made the whole protocol seem like a game. He thought he was playing around and it must have gotten to him afterward that it was far too real. So he had gone after the tech team that had made it look easy and he had kidnapped Tori because she had basically recruited someone that wasn’t mentally prepared to deal with the program.

But the program was eventually canceled. Peakstone had abruptly ended things despite the good track record of the program and so that had left the Unsub untethered. He probably shut himself away and had gone over what happened over and over again because he hadn’t been able to live with what he had done. So Prentiss had wanted Peakstone to hand over the Unsub’s name and they refused to. They didn’t believe any of the civilian drone pilots they hired would have gone on to become a serial killer through the person Prentiss spoke with had also said that they took extra precautions.

Peakstone sent every drone operator a list of casualties they caused and so Prentiss believed that to be a stressor. But Peakstone didn’t want to take any responsibility for what one of their own did and they still wouldn’t hand over the name. So Garcia was doing her best to look in their files when Tori escaped. She had shot the Unsub and had run away, but she hadn’t wanted to tell the team anything more than the Unsub’s name. His name was Jake Logan and he worked at Peakstone as a civilian drone operator. And it turns out that Tori hadn’t been the one to kill him because there had been another shooter in the area.

The Unsub had been murdered by a drone and so the team suspected Peakstone. Peakstone was the only one that would kill Jake much less know who he was and the location of his home. But the team couldn’t figure out why until Garcia looked into Jake’s record. She knew that he had killed over three hundred “insurgents” however she couldn’t find any record of that and so she had looked into other casualties when she found the real victims. Jack hadn’t targeted an insurgent camp, he had hit an elementary school. The kids had all been younger than twelve and if anyone had found out about their deaths then the military would have pulled their contract with Peakstone.

Therefore, Peakstone covered it up. They ended the program after that incident and they had killed Jake to keep him quiet yet he hadn’t been the only one they were after. They had also gone after Tori because she knew too much and so the team had saved her from a police officer that had been paid off. So Tori proved a lot more willing to talk once she realized her employers were willing to kill her and she made a deal in exchange for her testimony against Peakstone. And so they were finally going to be held accountable for the death of all those children.