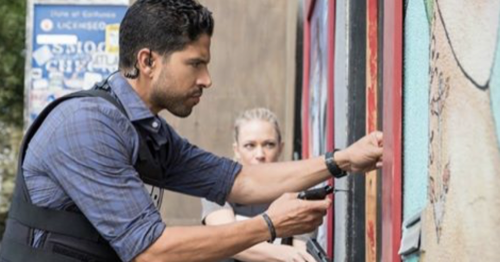 Tonight on CBS their hit drama Criminal Minds returns with an all-new Wednesday, November 15, 2017, episode, called “The Bunker,” and we have your weekly Criminal Minds recap below. On tonight’s Criminal Minds episode season 13 episode 7 as per the CBS synopsis, “The BAU searches for an unsub in Austin, Texas, who is targeting prominent members of the community.”

A friend of Alvez’s wasn’t doing so well. He had escaped the Crimson Artist some years back and was in physical therapy, however, Phillip “the Brick” Brooks had thought he’d be further along in his recovery by now and so he was pushing a lot of people away. Including Alvez! Alvez was both a friend and a former partner of Phillip’s. But Alvez finally had to confront Phillip because he realized his friend was never going to make the first move. So Alvez talked to Phillip and he understood the other man’s frustrations because Phillip needed all the support he could get. And therefore, Alvez refused to leave this friend’s side until Phillip could at least agree to have dinner with him.

But those same dinner plans had had to be put on hold. Alvez had gotten called into work when a second woman was targeted by an unusual Unsub and this Unsub was gaining some confidence in what he did. He had kidnapped both of his victims from their cars and held them hostage for a day while he carved symbols into their face, but then he returns them to their cars with just a white face mask that could either be part of his ritual or was one last taunt. So the team feared what would happen as he continued to escalate things and so they headed to Texas to talk to his victims. His first victim had been Hannah Accord.

Accord didn’t remember seeing the Unsub. But the team walked her through her memories in order to find out how she had been abducted. She said that she had been in her car when she turned the radio on and had been forced to turn it off because it had been making a hissing noise. So Hannah hadn’t known why her radio was the making that noise yet she just knew that the hissing continued even after she turned it off and so that’s when she remembered the snake. A snake had been placed in the back of her car and the Unsub must be using its venom to tranquilize his victims before he abducted them. And so that explained a few things.

The Unsub had picked only women to attack and the whole snake thing might be him making a point about Eve. But there had been a third woman abducted while they were talking to Hannah and so third victim helped tie everything together. She had gotten even more scars than the others and her tongue had been split by someone she says also had a split tongue. So the snake’s things went much deeper than they initially believed. The Unsub was forcing snakes on their victims and leaving a mask behind they had all been surrogates for one woman. This woman must have had two faces because the victims had all been pillar of the communities and that’s what many probably believe of the Unsub’s intended victim. And so the team questioned the gender of the Unsub.

They first believed they were dealing with a man that misogynistic, but with the scarring and precision the Unsub performed on their victims had made them believe the Unsub could actually be a woman. Women were more likely to go after another’s appearances and the split tongue had proved the Unsub was part of the body modification community. Meaning they had wanted to change their own appearance and that they could internalize their own misogyny. But another thing had been the way the Unsub subdued their victims. They had used the snake because they weren’t strong enough to overpower them on her own. So the team realizes the Unsub was female and that the surrogate someone close to her. And so Reid found a connection.

Reid had noticed that all the victims had been dumped outside of places for sale and they were all being handled by the same woman – Lara Gutierrez. But Lara has two daughters and one of them doesn’t look like her old school photo. She had gotten a job at a body modification place and had completely changed her looks according to her former mentor. So the team looked into Desi. Desi had reportedly told a teacher something worrying when she was younger and the court had forced her mother Laura into taking parenting classes, but Lara didn’t really get her act together until her second daughter came along and so that caused some resentment.

Tina had been adored by Lara and Lara had mentioned her lovely Tina as her greatest joy when she was won a big award. But that had been put in the paper and Desi had seen for herself that her mother had forgotten her. That Lara had only wanted to punish Desi because she hadn’t liked her and that Tina had been the perfect daughter she always wanted. So Desi had tried getting her mother’s attention by leaving bodies on her doorstep and then she had decided to go after the much bigger game. She later kidnapped her sister Tina and threatened to hurt her sister if Lara didn’t show up at her old shop.

So Lara went rushing to the shop to save her favorite daughter and that’s when Desi finally released some of her anger that’s she been holding onto for so long. She told Tina about their mother and how Lara used to put her outside in a cramped shed because she knew how scared Desi had been of snakes. But Desai said the snakes never bit her because they knew that she had been worthy and so she decided to give her sister that same “test” in front of their but getting a snake to bite Tina hadn’t been the only thing she wanted to do. She had also wanted to cut her mother for saying that she wished Desi had never been born and for making her feel like an ugly creature her entire life. And so it was a good thing the BAU had found her before she starts cutting into Lara.

The team figured out that Lara had bought Desi her own body medication shop and so they ran there in time to save both Lara and Tina. But Desi hadn’t wanted to turn herself in. She tried escaping through the back and, when that didn’t work, she also tried to charge at one of them. So the team had been forced into killing her because that was the only way to stop her and that hadn’t been their first choice. They had understood what triggered Desi and the pain she was acting on though she didn’t want their help and seeing that she had no one to rely on had made Alvez realize what he could do for Phillip.

He got his friend a dog that could be there when he couldn’t and that turns out to be just what Phil needed to smile again.