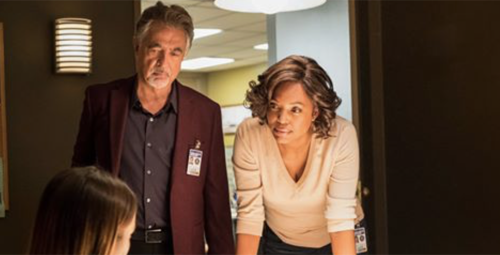 Tonight on CBS their hit drama Criminal Minds returns with an all-new Wednesday, December 6, 2017, episode, called “False Flag,” and we have your weekly Criminal Minds recap below. On tonight’s Criminal Minds episode season 13 episode 9 as per the CBS synopsis, “When two members of a conspiracy group in Roswell, N.M., perish in quick succession, the BAU is called to investigate.”

The team was investigating the murder of two people that belonged to the same conspiracy group. But the same group that seems to be the target for this Unsub were themselves proving to be a problem. They allowed the BAU to come in and talk to them however they shot down every suggestion they made and even acted like internet trolls. There had been one guy who told Rossi his latest book sucked and he hadn’t wanted to talk about anything else. So JJ tried to shut him down by reminding the group that they have said some ludicrous things in the past and they instead took it as a confirmation that there were, in fact, lizard people running the government.

But the team still tried to get through to the group and talk to them about what’s been happening when one young man claimed something in his pocket and when he went to look it turned out to be a gun. A gun that he wouldn’t put down no matter what Prentiss was telling him because he didn’t trust her. Doug thought the FBI planted a gun and so the last thing he said before he killed himself was that it was a “false flag”. Meaning he thought someone had been trying to frame him when he decided to kill himself. So the team was trying to figure out what happened and if Doug had been their Unsub all along though they couldn’t get anyone to talk to them.

The “Truthers” claimed up after Doug died and it didn’t look like none of them wanted to cooperate with the FBI. But one truther had at least been willing to talk… just for a price! Melissa Miller said she would talk to them if they allowed her to record the conversation for her podcast and so Lewis thought they should give in on this one matter if it got Melissa to open up, but Prentiss hadn’t wanted to give Melissa such power. She suspected that Melissa knew something that she was hiding and that begged question of what Melissa truly wanted. Did she want to find out why Doug did what he did or was she insinuating herself into the case for a purpose?

The team had considered the possibility of Melissa being the Unsub and so Lewis was considered to be the best person to question her because Lewis could profile her while getting Melissa to open up. But Melissa hadn’t just wanted to talk to Lewis. She wanted a proper exchange meaning she wanted to hear about the case and why the FBI believed there was a serial killer. So Lewis told the story from the beginning. She said they had gotten the call about two suspicious murders and that what made them suspicious had been the fact the two truthers had been killed by the same things they were talking about.

There had been the man that believed the government was drugging the water to control their minds and he had been drowned in his own fish tank. But the other one had believed Lydon Johnson had murdered JFK to start the Vietnam War and he had been shot in the same spot as JFK. So Melissa questioned why the FBI had wanted to talk to them and if it was to set one of them up for murder yet Lewis said they had found one of the victim’s gun safe empty and so they believe that was the gun that was used on him. And if it was, then it must have been killed by someone he knows because how else could they find a hidden gun.

So in a way, Melissa was right. The team had suspected someone from inside the group had killed the other two and that’s what made them what to look at Doug’s case to see if he had been the Unsub all along. But Melissa said that was impossible because the sheriff had set up a metal detector outside and the entire group had been cleared to go into the building. So Melissa said the FBI had to have planted the gun on Doug because he couldn’t have brought in an outside gun, but Lewis had tested that theory. She and Prentiss had gone to check the metal detector and they found it to be faulty.

Lewis was able to walk right through with her gun without upsetting the alarm. But Melissa didn’t care for Lewis’s explanation and said that the FBI was lying because that’s what they always do and so she wanted Lewis to continue the story however she told Lewis to stop lying to her and so Lewis tried to finish the story. She mentioned that a ripped page from the “Catcher In the Rye” had been found on Carl and that there had been weird markings on it. So Melissa mentioned Bob Orca makes his own copies of the book with commentary and that he sells it to them. And Melissa also tried to claim he was dangerous.

She said Bob was a hardcore truther and that he stockpiled fertilizer. But it turns out Bob wasn’t a terrorist, he was a merely a poor farmer. He thought he could use AFO fertilizer to grow organic tomatoes and couldn’t understand why it wasn’t working. So Bob went on to tell the FBI the truth. That he pretends to be a truther in order to sell things to that group and that he sold the book “Catcher In the Rye” to Carl with an inscription for Carl’s girlfriend, Melissa. Melissa hadn’t told the FBI that one of the victims was her boyfriend and she tried to claim it was no big deal when confronted.

But the team looked into the first murder and they found that death had been an accident while Carl’s death had still been murder. So the team’s best suspect for Carl’s murder had been Melissa. Melissa had been manipulating them and Lewis realized she had manipulated Doug as well. Doug must have been the guy Melissa was seeing behind Carl’s back and she killed him when he found out the truth but was going to frame Doug for Carl’s murder. His last words had been “I know a false flag when I see one, you bitch” and Lewis ultimately realized he was talking to Melissa the entire time.

Melissa had planted the gun on him before they went into the meeting with the FBI and the metal detector not working had also served to prolong the gun reveal. But when Doug found it, he knew Melissa set him up and was too weary to believe the government would believe his story. So Melissa was truly a sociopath and Lewis realized how she could get her. She recalled her conversation with Melissa and remembered when Melissa was going off about how Sandy Hook was staged by saying the government likes trading empty building amongst themselves because she knew Melissa would do the one thing she hates to see in others.

So they proved she murdered Carl and Doug by finding the bullets from the gun that she traded with her fellow truther!