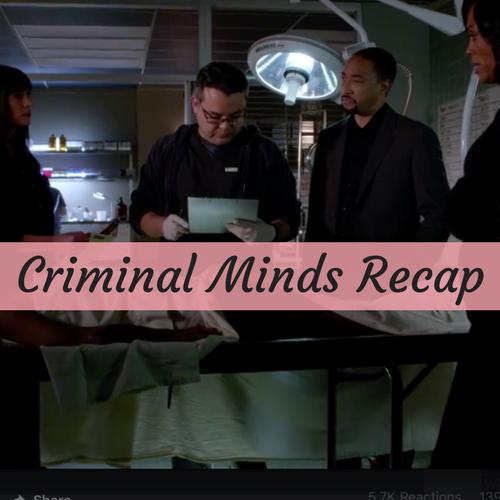 Tonight on CBS their hit drama Criminal Minds returns with an all-new Wednesday, March 15, 2017, episode called “Assistance Is Futile,” and we have your weekly Criminal Minds recap below. On tonight’s Criminal Minds episode season 12 episode 16 as per the CBS synopsis, “A mother steps forward with valuable information for the BAU to aid in their investigation of an unsub known as the Bone Crusher. Meanwhile, Reid adapts to a new set of rules in prison life.”

It isn’t easy being a federal agent in prison. There were guards that wanted to hurt Reid just as much as there were prisoners. But Reid was somehow learning to adjust on tonight’s episode of “Criminal Minds” and it didn’t hurt that he had friends that were there to protect him however not everyone else was so lucky. Reid had met another new inmate that was sporting bruises. So he had tried to offer some support and was firmly rejected because the newbie said Reid couldn’t understand what he was going through. They both were skinny and new so they could have easily been both victims. And instead Reid had had the guards even looking after him.

However, Reid was someone that takes comfort in helping people. He used to do it all the time when he had been free and working cases with the BAU. So Reid’s view of prison was a little skewed because he had gotten better treatment than others yet he hadn’t wanted to forget about that prisoner and he had ignored Jj’s advice. JJ had visited Reid in prison to fill him in on what was happening with his mother and the team who were apparently dealing with an Unsub that’s known as the “Bone-crusher”. And JJ had also told Reid that it would best for him to keep his head while he was prison, at least, until they were to exonerate him.

So JJ had thought that Reid would be responsible and not bring about trouble though he was already looking for it while JJ was out hunting the Unsub. The Unsub had taken three women and had held them captive over a number of days while he crushed all of their bones until it eventually lead to their death. Yet, the Unsub had been profiled as someone that wasn’t interested particular in the girls because he showed no interest in them other than being easier for him to subdue so the team thought he took pleasure out of the mutilation. And so that helped them fine tune their profile because they figure the Unsub must have a history that was left unreported.

They had profiled the Unsub as someone that realized he could receive pleasure from hurting others or simply witnessing a serious injury at an early age and so that must have translated into someone that stood out. He might have been awkward growing up and seen as an outcast. Though the team had surprisingly gotten a tip when a woman came in and stated that she believed her son might be the “Bone-Crusher”. So Miranda White had been asked why she suspected her son and she took them back to her place so that she could show them her son’s room. She said Danny had been living with her until she asked him to straighten out and he just left.

The room however had had memorabilia. Miranda had showed Rossie and Alvez the wall that she thought was peculiar and they instantly believed that she had been right to suspect her son. The wall had been covered with images of injured women in which the bones were left exposes. But must of those images had been drawn and so Daniel Allen White had had this obsession that has been manifesting for years before he acted on it. So Daniel was listed as person of interest and the local police department put out an APB on him as well as flashed his picture on the tv because Prentiss believed that would force Daniel’s hand.

Prentiss and the others believed the Unsub was getting close to the victims by using the charm offensive. So they figured a public alert would ruin that for him and force him to be defensive yet that only pushed Danny to panic and attack two women coming out of the bar. However, Danny had been identified by the woman he left behind so they knew they were looking for the right person and had needed to find out more about him. His mother, Miranda, on the other hand hadn’t been sure about what was important because she still didn’t know what went wrong. She said Danny had been normal when he was a baby and that everything just changed overnight.

Miranda had said her husband left her and it had been her and Danny ever since. Yet, when she was repainting the apartment they first lived in, she had fallen off the ladder and had noticed that Danny had been in the room laughing. So there was a possibility that Danny pushed his mother off the ladder because he had been showing early signs of being a sociopath though Miranda had also described her son as being awkward as a teenager and so they hadn’t fit their charming profile of him. Not when Danny recently turned twenty-three and had been a teenager not that long ago. And so Alvez who developed a rapport with Miranda had asked her if her son was taking drugs.

The medical examiner had found MDMA drugs in the victims and they had done a search about that MO so they found Danny’s other victims. His first victim had been a woman that had fallen off a roof during a rave and Danny had been caught sexually assaulting the body. Though he run off before the cops came and so no one had known about Nancy Santiago until Garcia searched the database, but what stood out had been that the victim had been assaulted. None of the other victims had been assaulted and so they had been looking for a key piece when Mirana helped them. She told them that she had given her son ecstasy a while back.

Miranda explained by saying she had read an article that said drugs could help people like Danny show regular emotions and she added that it had worked in the beginning. Danny had been willing to finally talk to her and she had felt like they could finally be happy. But then Danny’s mood started to change back and so that helped the BAU figure out Danny’s shift. They said that MDMA could increase his sex drive which was why he had attacked Nancy however the same drug could make him impotent. So Danny was trying to recreate what had happened with Nancy and that was nearly impossible because of the same drug he thought would help.

So that increased his rage and made his need for torture to be never-ending yet, because they knew about Nancy, the team showed up at the same building where the rave had been held and they found Danny before he could kill another woman. However, Danny said that he couldn’t survive in prison and so he asked them to tell his mom he was sorry. Right before he jumped off the building and killed himself. And so they had closed a case only the Unsub got to end things on his terms.

Yet, Reid’s interference had led to him getting beaten up in prison.