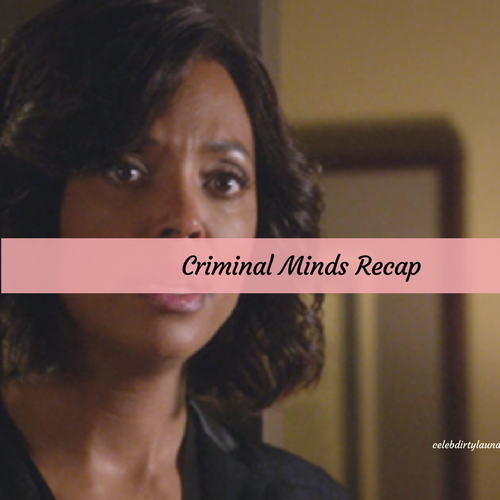 Tonight on CBS their hit drama Criminal Minds returns with an all-new Wednesday, April 5, 2017, episode, called “True North,” and we have your weekly Criminal Minds recap below. On tonight’s Criminal Minds episode season 12 episode 19 as per the CBS synopsis, “The BAU investigates when three victims are found tied to stakes in the Arizona desert.”

The team finally heard something about Mr. Scratch. He was apparently keeping to border towns and that allowed him to use the easy access to cross over to Mexico at will. But the picture the team found of him wasn’t much. It just showed that he was still around and could have possibly targeted their friend Reid. So Prentiss had asked Lewis to check on Reid. She knew that he was having a hard time in prison and that Lewis could more freely speak to him if she claimed to be Reid’s therapist however Reid wasn’t in a good place when Lewis saw him.

Reid had recently drugged half of his cell block and there were still people in the hospital because of what he did. So he blamed himself what happened. Reid had just wanted to take a stand and refuse to pass along drugs for some of the other cell mates though he had hut others in the process and that was pretty hard for him to live with. However, for Lewis, he had at least tried to help with their investigation into Mr. Scratch by trying to remember something. And while Reid was reliving the worst day of his life, the others had gotten word of a new case.

The team had learned that a hiker found three bodies all strung up in the Arizona desert and the deaths appeared to be ritualistic. So they boarded their plane and headed out there yet the case had unnerved a few of them. They had found out the victims were all found wearing shock collars that didn’t have any batteries and that meant the Unsub simply placed it on them as a way to show off how powerful they were over their victims. Though there were also few others things that were creepy. Like the fact the victims al had some kind of blue shawl draped over their shoulders and that there were several water bodies found nearby.

Yet, the water bottles proved that the Unsub went out to the desert to frequently watch the bodies rot in the desert and that he took pleasure in their suffering. So that indicated the Unsub’s uncontrollable rage, but the team couldn’t figure out why he was so angry at his victims. The victims all turned out to be returning graduates that had excelled academically and were even reported on in the local paper so that blue shawl that had been put on them was a mockery of the valedictorian sash they had all worn.

So that begged the question of what tipped him off? What made him decide one day that he was suddenly going to start killing people that had so much to live for and that he was even going to make the last moment of their lives a mockery? But knowing that the Unsub had a certain type, the team tried to protect returning graduates that hadn’t been targeted because they thought they could stop the Unsub and unfortunately there were wrong. He had no problem with changing his MO and had chosen a college drop-out as his fourth victim.

Joey Fletcher hadn’t finished school and he could barely hold down a job. However, he was later found in the same position in just another location of the desert. So Alvez tried to figure out if the Unsub had any kind of pattern and he had thankfully found what the Unsub was doing when he placed the bodies in a certain position. As it happens the bodies were placed in a position of a human sun dial and so that showed the Unsub was somehow counting down to something though they didn’t know what his end game was.

The team considered the possibilities and they had been left flummoxed about what the Unsub could be planning yet things with Reid took a wrong turn. Reid had seemingly remembered events in which he murdered the doctor and someone had watched him do it. Though Lewis knew that she had pushed Reid too far because he was creating a false narrative just to have a better understanding of what happened. So Tara pulled back and she had talked things over with Prentiss before deciding that she would take a different approach.

Elsewhere, however, the team were connecting the dots. They knew that Joey didn’t match the other victims and so they looked into a possible connection they all shared. But what they found out was that Joey had won a scholarship to college due to a science fair. His project was apparently about sun dials and another finalist in the competition had made his project about shock collars. So Garcia looked into the other finalist and she found Ben Davis. Ben wasn’t able to win another scholarship to college and so he never got a chance to go.

However, Ben grew to be resentful about that because he believed it would have helped get a better job and even take his mother to Hawaii. So the moment that Ben gave up on that dream was when he snapped. He knew that his mother hadn’t thought much about him and he heard her more than once complain about how much of a loser he was though Ben didn’t want to give up on making his mother’s life better. And to prove himself, he had even kidnapped the judge of that science fair in order for his mother to hear how he had been cheated out a scholarship that was rightfully his.

So the team later found Ben with the judge in his house and his mother dead because he had killed her once he finally given up on trying to prove himself yet Ben had been taken in alive and the judge had thankful been rescued. Which is something the team could be grateful for. Though Lewis on the other hand had a hard time talking to Reid again. Reid had sworn that he killed the doctor and it had taken Lewis everything to convince him that he should revisit the crime in his mind. So he ultimately remembered that the person that had killed the doctor and framed him hadn’t been Mr. Scratch – it had actually been a woman.

A woman with a grudge!