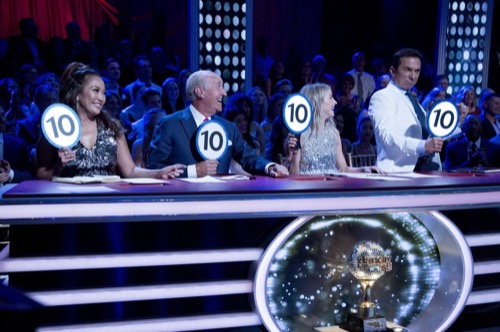 Tonight on ABC the glitz and the glimmer returns to the ballroom for the DWTS Finale! We have your all-new Tuesday, May 23, 2017, season 24 episode 11 “Winner Announced″ and we have your Dancing With The Stars LIVE recap below!  On tonight’s DWTS Season 24 episode 11 as per the ABC synopsis, “A winner is announced in the 24th-season finale. Included: a final competition round; performances by Hailee Steinfeld; OneRepublic; and Lady Antebellum. Also: a performance from the TV musical movie “Dirty Dancing”; a preview of a summer dance tour.”

Make sure to bookmark this spot and come back from 8 PM – 9 PM ET for our live recap of Dancing With The Stars Season 24 episode 11.  While you wait for our recap make sure to head over and check out all our DWTS recap, spoilers, news & videos, right here!

Tonight’s season finale of DWTS kicks off with a fun opening number introducing the judges and the final three celebs: Normani Kordei, David Ross, and Rashad Jennings.  Before we get the night started, we take a look back at Season 24 and he final three’s journeys to the finale. Erin Andrew and Tom Bergeron share an exciting video montage.  Then, Hailee Steinfeld takes the stage for a live performance of her hit song “Starving.”  Of course, it wouldn’t be a DWTS finale without the hot guys taking the stage and getting down and dirty for the fans.

Season 24 of Dancing with The Stars brought us some pretty awesome celeb and pro couplings. Cheryl Burke and Bonner Bolton didn’t make it all the way to the finals, but they were pretty close, they take the DWTS stage next and perform one last time together.

Nancy Kerrigan and her pro partner Artem are up next to perform a repeat of their popular Vegas night Samba.

Another cute coupling was Bachelor Nick Viall and Peta Murgatroyd. But, it turns out that Nick actually wished that he was paired up with Peta’s fiancé Maks Chmerkovskiy, apparently Nick has a massive Man Crush on Maks. After Peta and Nick perform, finalist David Ross and Lindsay take the DWTS stage and perform their favorite dance of the season, David’s hilarious rendition of Magic Mike, with faux abs and all.

Charo certainly made things interesting this season for the first few episodes that she was in the competition. Tonight, she’s not dancing though. She takes the stage with Keo and wows the audience on her guitar while Witney Carson stands in for her.

The next couple to perform their favorite dance of the season is finalist Rashad Jennings and Emma Slater. They decided to perform a rendition of their Cha-Cha from night one, and its certainly impressive how far the NFL player has come over the course of the Season.

Dancing With The Stars fans were certain that Glee alum and former Beyonce back-up dancer Heather Morris would go all the way this season. However, she barely made it in to the top 8 before she was shockingly eliminated. Heather and her partner Maks return to perform their favorite dance of Season 24, and they get a helping hand from iconic group TLC as they play “Waterfalls.”

After One Republic takes the stage with an exciting performance of their hit song “No Vacancy,” it’s time for Normani Kordei and Val Chmerkovskiy to perform their favorite dance of the season, “When I Grow Up.” Normani and Val are joined on stage by head judge Len Goodman and Bruno, dressed as construction workers.

There were a couple f shocking eliminations during Season 24, but none was more shocking than the night we said goodbye to Gold Medalist Simone Biles. Simone and Sasha hit the DWTS stage next and perform their Disney Night dance to a hit song from the popular movie Moana.

Dancing With The Stars finales are always packed full of amazing live musical performances. The next act to take the stage is Lady Antebellum with their hit song “You Look Good.”Mr. T. stole our hearts during the short time that he was on Season 24, and we get to see him one more time tonight before the season comes to a close.

Mr. T. stole our hearts during the short time that he was on Season 24, and we get to see him one more time tonight before the season comes to a close. ABC has been working long and hard on a dancing adaptation of the hit movie “Dirty Dancing.” And, lucky for us we get a sneak peek of the exciting performance, which includes Pussycat

ABC has been working long and hard on a dancing adaptation of the hit movie “Dirty Dancing.” And, lucky for us we get a sneak peek of the exciting performance, which includes Pussycat Doll Nicole Scherzinger. Dirty Dancing will are tomorrow night, Monday, May 24, on ABC.

The final three couples get to perform one last time for the judges before their scores and America’s votes are tallied to determine the Season 24 winner.

Len: That was a proper fusion. You started off and did some basic Foxtrot and went in to a little Salsa. It was a proper fusion. Dancing is a joyful thing, watching you gives me joy. Well done David. Julianne: America has spoken and that’s why you are here tonight. In this entire season you have not disappointed. The reason I dance is because I am present and feel pure like a little kid, and you look like a little kid out there. Thanks for being so entertaining this season. Bruno: Whatever happens tonight, to me, you already are the people’s champion. Carrie Ann: I am sad that this is going to be the last time I am going to see you dance tonight. You came to this competition pure of heart, you opened all of our hearts. And I love the wisdom of the DWTS fans at home, because the way they vote, is the way I want to vote. Scores: Carrie Ann: 9 Julianne: 9 Len:9 Bruno: 9 Total: 36/40

Julianne: You guys did a blend of a Tango and Foxtrot and it was seamless, and it looked like you had been practicing it for two months. Flawless. The transformation of who you have become is absolutely stunning and beautiful. Bruno: You are a magnificent creature, you attacked that Tango like a tigress. Power, beauty, versatility, a leading lady! That’s what you are! Carrie Ann: That was such a great display of everything you are. You have made such a challenging journey and in my opinion, you were born to win this competition.  Len: You dance with clean and precise movement, and you bring out the flare, it’s just lovely. You have been the most consistent throughout Season 24.  Scores Carrie Ann: 10 Len: 10 Julianne: 10 Bruno: 10 Total: 40/40

Bruno: Watching you has really been watching a rising star getting brighter and brighter and going Super Nova. You are one of the most charismatic and dazzling performers I have ever seen. Love you, man! Carrie Ann: I loved how you chose not to fuse them and made them two very separate dances. i watch you and I think you are a pro’s dream, you dance every time like a man who has nothing to lose. I don’t know if you were born to win this competition, but you have certainly earned it. Len: Your progression through this competition has been fantastic. Week one, did think you were getting into the final? No way! I would have liked you to hold her a little tighter. Julianne: All I have to say is this is a great way to finish the season. It was a celebration of your partnership, and that’s what this competition has been all about. Your partnership reminds me of Apollo and I and the love you have for each other. Anyway, this is a great way to celebrate the end of the season. Scores Carrie Ann: 10 Len: 9 Julianne: 10 Bruno: 10 Total: 39/40

One Republic takes the stage one last time to perform “I Live” before we get down to the results.
Now, it’s time to learn which couple is in third place. According to the judges’ scores and America’s votes, Normani Kordei and Val have fallen short of the Mirror Ball trophy, and have been eliminated.

David Ross and Rashad Jennings are the final two contestants.

According to America’s votes, the Season 24 winner is NFL player Rashad Jennings and his partner Emma Slater.

THE END SEE YOU NEXT SEASON!