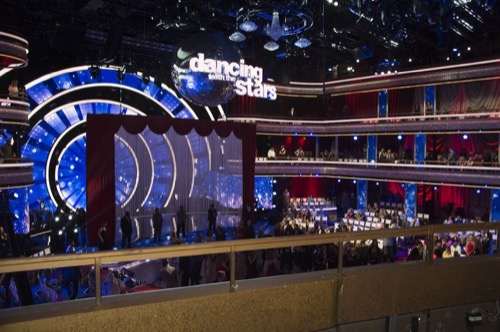 Tonight on ABC the glitz and the glimmer returns to the ballroom! We have your all-new Monday, May 8, 2017, season 24 episode 8 “Trio Night” and we have your Dancing With The Stars recap below!  On tonight’s DWTS Season 24 episode 8 as per the ABC synopsis, “An elimination occurs after the eighth week of performances, which feature two rounds of dancing, including a trio dance. Also: a preview of the “Dancing With the Stars: Live!—Hot Summer Nights” tour.”

Make sure to bookmark this spot and come back from 8 PM – 10 PM ET for our live recap of Dancing With The Stars Season 24 episode 8.  While you wait for our recap make sure to head over and check out all our DWTS recap, spoilers, news & videos, right here!

Tonight’s episode of Dancing With the Stars kicks off with a fun number featuring the pro dancers and remaining celebs in the competition. There’s two rounds of dances tonight, for the first round of dances, the pros have chose dances for their celeb partners that they think suit them well.

Rashad Jennings & Emma Slater – Jive – “Shake a Tail Feather” by Blues Brothers [VIDEO HERE] Judges comments: Len: Full of fun, full of energy, full of content. Listen Rashad, you got to work on your feet. Work hard and nail that footwork! Julianne: That was so fun to start the night off! Jive is all about being slick and quick, your footwork could be sharper, but I’m so glad you guys are here.  Bruno: Great choice Emma! You really showcased the showcase extraordinaire! Carrie Ann: In my opinion, they should change the definition of entertainer and put a picture of you in Webster dictionary. Scores: Carrie Ann: 9 Len: 9 Julianne: 9 Bruno: 9 Total: 36/40

Normani Kordei & Valentin Chmerkovskiy – Contemporary – “Freedom” by Anthony Hamilton and Elayna Boynton [VIDEO HERE] Len: I’m not a big fan of contemporary, throughout that dance, you could have heard a pin drop. The audience was spellbound and so was I. Julianne: I can’t sit down, I’m completely mesmerized, I have no words. You’re doing more than dance, you’re creating art.  Bruno: What can I add to that? Tonight you are getting the Pulitzer Prize for extraordinary. No one will ever break you. Carrie Ann: I am sorry for what you have been through, but tonight what I saw was healing. Thank you for such a profound moment. Scores: Carrie Ann: 10 Len: 10 Julianne: 10 Bruno: 10 Total: 40/40

Bonner Bolton & Sharna Burgess – Argentine Tango – “Believer” by Imagine Dragons [VIDEO HERE] Len: This was all too stiff. You get frustrated, don’t blame the judges, blame the viewers. You’ve gone a switch too far in the competition. Julianne: It’s week 8 frustrations, it happens. Week 8 sucks, you just want to kill each other. You have to use that frustration.  Bruno: You really made the most of what you got, expertly guided by Sharna. You’ve really tried to get it right. Carrie Ann: I think that was a great choice of song. In the beginning we never thought you would go this far, you made us believers. Scores: Carrie Ann: 8 Len: 7 Julianne: 8 Bruno: 7 Total: 30/40

Simone Biles & Sasha Farber – Foxtrot – “What Makes You Beautiful” by One Direction [VIDEO HERE] Len: That was great, nice posture, you lifted your shoulder a little – it was full of youthful exuberance. Well done to you. Julianne: That was a very pretty dance. There wasn’t something that wowed me, but nothing disappointed me either, it was sort of safe. Bruno: You look good my darling. You make it look so easy, it’s like a walk in the park for you. You have to bring surprise into the game now. Carrie Ann: Your skills are unquestionable. I feel like I don’t know you well enough, once in a while there is beauty without a smile. Scores: Carrie Ann: 9 Len: 9 Julianne: 9 Bruno:  Total: 36/40

David Ross & Lindsay Arnold – Waltz – “Humble and Kind” by Tim McGraw [VIDEO HERE]  Len: It was a little unsteady, but you attempted to get the correct footwork, which most celebrities totally disregard. It was poignant and 100% your best dance.  Julianne: You’re what this show is all about. Your partnership has never faltered, because of that, you can go really far. Bruno: This was probably the best father and daughter dance at a wedding you will ever see. People will copy it forever. Carrie Ann: The technique you put into that and the attention of the detail, look at the difference it made in your dance tonight. Scores: Carrie Ann: 9 Len: 9 Julianne: 9 Bruno: 9 Total: 36/40

Rashad Jennings & Emma Slater & Witney Carson – Argentine Tango – “Dreams” by Gabrielle Aplin & Bastille Len: It was so full of passion, the storytelling was terrific, it was a great way to do a trio dance. You gotta work on your footwork! Julianne: The concept, the choreography, it was all amazing. You had different dynamics, it got passionate and strong. You’re a good dancer. Bruno: I couldn’t look at the feet because the blond was flowing everywhere. That was an erotic chain reaction. You handle two better than one! Carrie Ann: By far this was your best dance, it’s because of the way you are so in control. It was all together. I thought it was spot-on.  Scores: Carrie Ann: 10 Len: 9 Julianne: 10 Bruno: 10 Total: 39/40

Normani Kordei & Valentin Chmerkovskiy & Alan Bersten – Jive – “Feeling Alive” by Earl St. Clair Len: I don’t like it, I know what it is, you stand on the judge’s desk – it’s a little time wasted.  Julianne: Let a girl have her moment, she was killing it and owning the stage once again. So good! Bruno: That was a glorious All-American Jive and it was so clever, you had the country flavor perfectly. Carrie Ann: You are an incredible actress, not only an incredible dancer. You bring it every single character. Scores: Carrie Ann: 10 Len: 9 Julianne: 10 Bruno: 10 Total: 39/40

Bonner Bolton & Sharna Burgess & Britt Stewart – Jazz – “That’s What I Like” by Bruno Mars Len: For me it was a little bit too raunchy for the old guy, I’m 73. You didn’t do a step wrong throughout that dance. Julianne: I feel like we watched the security cameras and I feel bad. But, America liked it, and they’re the ones that are voting. Bruno: It’s the Wolf of Wall Street, i think you should give those girls a raise! Carrie Ann: I feel like I need to take a shower, it was kind of raunchy. Bonner, you didn’t pop as much as you needed to pop. Scores: Carrie Ann: 7 Len: 7 Julianne: 7 Bruno: 7 Total: 28/40

Simone Biles & Sasha Farber & Brittany Cherry – Paso Doblé – “Don’t Let Me Down” by The Chainsmokers featuring Daya Len: You have had more nines from me than anyone. You are my favorite to win even though you never got a 10.  Julianne: There were times that I felt you stood out and there were times that I felt you blended a bit.  Bruno: You hit everything with such a ruthless efficiency that at times we love artistry. Bring through the hands. Carrie Ann: Definitely saw an improvement in the emotions, there was an authenticity, it drew me in to be engaged. Scores: Carrie Ann: 9 Len: 9 Julianne: 9 Bruno: 9 Total: 36/40

David Ross & Lindsay Arnold & Hayley Erbert – Paso Doblé – “Gangsta’s Paradise” by 2WEI Len: I wanted to end on a positive note, but I didn’t like it at all, I wanted two dances.  Julianne: You were definitely committed to the character, but you lacked shaping. Bruno: That was colossal, but you have to be careful, at times you look like Godzilla. Carrie Ann: Tonight was difficult, you put your strategy more in to your first dance, this one felt clumsy. Scores: Carrie Ann: 7 Len: 7 Julianne: 8 Bruno: 7 Total: 29/40

Now, it’s time to learn who will be going home tonight and who will be moving on the semi-finals. Scores and votes from last week have been combined – Normani and Val, Simone and Sasha, Rashad and Emma, and David and Lindsay are going to the semi-finals.

Bonner and Sharna are officially eliminated from Dancing With the Stars.