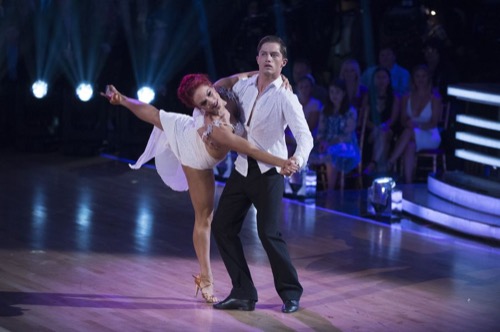 Tonight on ABC the glitz returns to the ballroom as Dancing With The Stars returns for the eighth episode of season 24 and the remaining contestants will dance two dances. Professional bull rider Bonner Bolton and his professional dancer Sharna Burgess took the DWTS stage tonight and danced an Argentine Tango – “Believer” by Imagine Dragons.

On tonight’s episode, with just a few weeks left in the competition before heading towards the finals, the five remaining couples find themselves tasked with completing two full dances. In addition, there will be a sneak-peek preview performance from the upcoming tour, “Dancing with the Stars: Live! – Hot Summer Nights.”  By the end of the evening, one celebrity will be sent home.

Len: This was all too stiff. You get frustrated, don’t blame the judges, blame the viewers. You’ve gone a switch too far in the competition. Julianne: It’s week 8 frustrations, it happens. Week 8 sucks, you just want to kill each other. You have to use that frustration.  Bruno: You really made the most of what you got, expertly guided by Sharna. You’ve really tried to get it right. Carrie Ann: I think that was a great choice of song. In the beginning we never thought you would go this far, you made us believers.

Watch the video below and let us know what you think, do you agree with the judge’s comments? Do you think Bonner did enough to avoid elimination tomorrow? Make sure to head over and check out all our DWTS recaps, spoilers, news & more, right here.