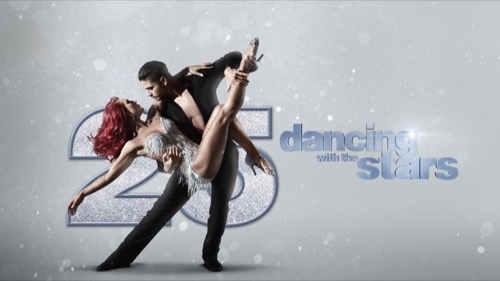 Tonight on ABC the glitz and the glimmer returns to the ballroom as another new episode of Dancing With The Stars season 25 airs! We have your all-new Tuesday, October 16, 2017, season 25 Week 5 “Disney Night” DWTS  and we have your Dancing With The Stars recap below! On tonight’s DWTS Season 25 episode 5 as per the ABC synopsis, “An elimination occurs after the fifth week of performances, which feature Disney-themed performances spotlighting a variety of eras.”

Tonight’s episode begins with the professional dancers dancing to “It’s A Small World” and are quickly joined by Mickey Mouse and Minnie Mouse. The couples are introduced for their various roles tonight, which will be shown as the night progresses. Tonight is the half-way point for the 25th season of Dancing with the Stars (DWTS).

Victoria says when she thinks of Disney, she thinks that nothing is impossible! There is a magic in dreaming BIG. Judges’ comments – Len: It was just like a Disney movie, full of joy, sparkle, and entertainment. I thought it was fabulous, well done. Bruno: I liked the blend of styles put together. It was effortless and beautiful. Carrie Anne: Seeing Val in those shorts is a treat! I loved the most that you were in perfect sync the whole way through. You brought it to life, way to start the show. Scores: Carrie Anne: 9 Len: 9 Bruno: 9 Total: 27/30

Vanessa says last week was the hardest dance she has done thus far. It’s midway through the competition and everyone is really bringing it, she hopes to get some Disney magic to help her through her waltz. Judges’ comments – Bruno: Pointing at Len – even Grumpy here will be happy with this one! It was a simply beautiful waltz that captured the feel of the movie but keeps your balance when you go out of Maks on your turns. Carrie Anne: I loved it, the intimacy, but felt there were moments you stopped breathing, so I encourage you to embody each other, you don’t need to stop mid-movement, Many stunning movements. Len: I’m more bashful than Grumpy. I liked the choreography and proper waltz that was in there; a couple of times unstable. It was understated and beautiful, well done! Scores: Carrie Anne: 8 Len: 8 Bruno: 8 Total: 24/30

Lindsey Stirling & Mark Ballas – Foxtrot (“When You Wish Upon a Star” from “Pinocchio”).

Lindsey says the essence of the song is that dreams can come true. When she was a struggling artist, saying she would never succeed; she was inspired by the Walt Disney story, he never gave up and neither did she. Judges’ comments – Carrie Anne: I think what I love most about that is you didn’t feel perky. This was classic and stunning; quite the transformation. Beautiful incredible dancing and one of the finest holds I have ever seen. Len: That was delightful. I loved that start Mark. I absolutely loved that! Bruno: By the end, I felt I was bathing in stardust. You really captured this timeless style and elegance almost like Fred Astaire meets Disney. Well done! Scores: Carrie Anne: 9 Len: 10 Bruno: 9 Total: 28/30

Judges’ comments – Len: You have a droopy right arm and keep it a bit more solid. It was fun and entertaining and you enjoying yourself was commendable. Bruno: I loved the speed of it and the bit of Charleston you put into it. You lost a step a couple of times, but don’t lose the spirit of it. Be careful with the hold and not a bearhug. This is the right direction, you are embracing the performances. Carrie Anne: The second half of this dance I saw you letting loose and having fun, and that’s what people love. In the beginning, you were out of sync, and I have to score appropriately but I encourage you because this is what we want. Scores: Carrie Anne: 7 Len: 8 Bruno: 7 Total: 22/30

Judges’ comments – Bruno: You get more and more polished every week and despite having the wingspan of 7 feet, you managed to control the action very well. Don’t dig down but well done. Carrie Anne: I had high expectations, you two have become one of my favorite couples. Your chemistry is pure, and your movements are so fluid and polished; you’re contenders in my eyes. Len: I liked your footwork a lot. Generally, the whole performance was good, but you went over the top towards the end. I am enjoying watching you dance compared to week 1. Kermit: You were both amazing and floated across the dance floor like a pair of tadpoles that lost their tails. Scores: Carrie Anne: 9 Len: 8 Bruno: 8 Total: 25/30 – Kermit gives them a 10!

Sasha is thrilled she has lost 37 lbs so far in this competition as Gleb pushes her to be more mermaid; she jokes that he makes a great mermaid. Judges’ comments – Carrie Anne: It’s so nice to see you this way and I can tell that felt good on your body. I love the way your body interprets these dances. I was mesmerized, well done! Len: That was a well-crafted routine, great chemistry and a warmth between you. It was lovely! Well done! Bruno: The beauty of the Siren, the enchantress of the sea; and Sasha you weren’t bad either, I think you got the catch of the day! The shapes were very good, lovely placement. Keep going that way. Scores: Carrie Anne: 8 Len: 8 Bruno: 8 Total: 24/30

Frankie says he is not the hunk or sexy guy people hung on their wall, he is the funny, awkward kid. He hopes the costume will help with that. Judges’ comments – Bruno: I’m telling you Frankie, you got your first blockbuster. I like the chemistry, the choreography was the Argentine Tango with all the right trimmings and attitude. Great job both of you! Carrie Anne: The truth is I saw one mistake but it wasn’t Frankie, it was Witney; there was so much intensity and you gave us 5 Argentine tangoes in one dance. You nailed it! Len: That was a proper swashbuckling routine and you are not going to be walking the plank this week. It was a magnificent effort. Scores: Carrie Anne: 10 Len: 9 Bruno: 10 Total: 29/30

Jordan Fisher & Lindsay Arnold – Foxtrot (“You’re Welcome” from “Moana”). Lindsay says it’s tough on her to maintain their spot at the top of the

Lindsay says it’s tough on her to maintain their spot at the top of the leaderboard. They danced to Jordan Fisher’s own song – he felt amazing about it. Judges’ comments – Carrie Anne: You are unstoppable. You were going a little long when you did the breakdown but I can’t say anything because you did it perfectly. Len: What pleased me was all the foxtrot hold. I’m not a big fan of the mocking about in the middle… the part and hold was so good, I can forgive anything. Bruno: We have another Disney smash hit in our hands. This is how you would dance the foxtrot in the 21st Century. You kept the technique perfectly and Thank God you know your stuff!! Scores: Carrie Anne: 10 Len: 10 Bruno: 10 Total: 30/30

Nikki Bella & Artem Chigvintsev – Jazz (“Remember Me” from “Coco”). Artem wants to make sure they have enough Mexican movement and brings in professional dancers to show them; they are dancing to a song from the up and coming Pixar movie “Coco”. Judges’ comments – Len: That dance summed up the whole night, joyous and full of fun and your best dance. Bruno: Fiesta time, bring down the Tequila shots. Vibrant celebration of life, you never looked more beautiful. You were just blossoming tonight. Carrie Anne: Sometimes the history adds to the performances but this one is new so no one knows the characters. I’ve never seen you more at home on the dancefloor and I cannot wait to see it. Nikki and Artem says the movie is amazing.

TIME FOR THE RESULTS

Combined with Judges votes the first couple who is jeopardy is Sasha and Gleb and joining them in jeopardy are Frankie and Witney; the rest are safe. The couple who is leaving right now is – SASHA & GLEB!