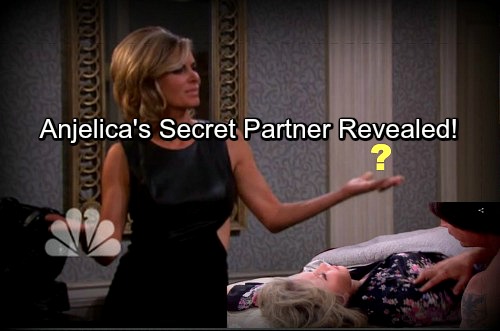 Days of Our Lives (DOOL) spoilers tell us that since her return to Salem, the newly deceased Anjelica Deveraux quickly weaved her deceitful web of treachery and was sending shockwaves throughout Salem. Apart from orchestrating the kidnapping of Marlena Evans and Adrienne Kiriakis and the planting of their respective alter egos Hattie Adams and Bonnie Lockhart to take their places, Anjelica tried to sink her claws into Justin. But was Anjelica working alone, or was she also taking orders from a mysterious boss or partner?

While Adrienne is locked away in prison, having being switched for her lookalike Bonnie, Anjelica had been plotting away to use this switch as part of her plan to infiltrate the Kiriakis clan and win Justin for herself. The missing piece of this puzzle is a very important question: how did Hattie and Marlena fit into Anjelica’s grand plans?

The finger of blame could be pointing in the direction of the house of DiMera. As viewers know, Hattie’s surgery to look identical to Marlena was performed under the orders of the late Stefano DiMera. Hattie’s fate has been tied to the DiMera family over the years and her most recent run in was with Andre. There is no love lost between John and Marlena on one side and the DiMera clan on the other.

Is it a coincidence that Eileen Davidson will be making a return to Salem to reprise her character, Kristen DiMera? If anybody has an axe to grind against Marlena and John, it would have to be Kristen. Last time viewers saw Kristen, she fell to her presumed death after a heated confrontation with her lifelong nemesis Marlena. Being thrown out of a window and left to die is a good excuse for a vendetta and the launch of a juicy plot or two.

Days of Our Lives spoilers day that Kristen being the late Anjelica’s accomplice in this plot could be a plausible theory and would explain the Hattie and Marlena angle being played. Kristen is also no stranger to alter ego lookalikes. After all, the DiMeras hired Susan Banks as a Kristen double as part of a ruse to keep John and Marlena apart.

Days of Our Lives fans know that Kristen has also been obsessed with Brady Black. With John and Marlena being distracted by Hattie’s ruse and Marlena herself being abducted, the field would be much clearer to try another attempt at winning back Brady for herself.

On the other end of this story is Bonnie’s attempt to pass herself off as Adrienne. The Kiriakis family, a rival to the DiMera’s empire, are also fiercely protective of Brady, especially Grandfather Victor. With the Kiriakis house being set as the target of Bonnie and Anjelica’s joint scheme, the ensuing chaos and confusion could be another opening for Kristen to slither in through the background and try to seize onto Brady.

Days of Our Lives viewers will have to wait for the next chapter of the Kristen saga to see whether or not this DOOL storyline theory will come true, as predicted. Of course any plot Kristen hatched involving Anjelica didn’t count on her sudden death!

Naturally this tragedy, which has Lucas (Bryan Dattilo) waking up to Anjelica’s corpse on Monday’s new Days episode, will change the plans of the behind-the-scenes mastermind. Come back to CDL for all your Days of Our Lives spoilers, news and updates.