Days of Our Lives Spoilers: Brady Panics Over Tate’s Disappearance – Eve Accused of Kidnapping, Did She Do It? 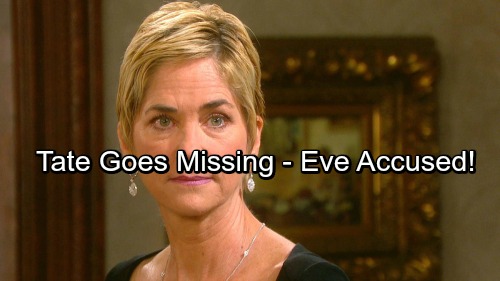 Days of Our Lives (DOOL) spoilers tease that Eve (Kassie DePaiva) and Brady (Eric Martsolf) will continue to be at each other’s throats. Brady recently tried to frame Eve for Deimos’ (Vincent Irizarry) murder and stirred up trouble for himself in the process. The Salem P.D. has been busy with all the shooting drama, but Brady and Victor (John Aniston) could land in hot water eventually.

Eli (Lamon Archey) will do some digging soon enough, but Eve will work on a new plot in the meantime. Days of Our Lives spoilers say Eve will brainstorm ways to gain the upper hand. She’ll be determined to get revenge on Brady and run the show at the Kiriakis mansion. Eve feels like this should be her kingdom now, so she’ll definitely want to put Brady in his place.

Brady knows Eve is a threat, but he still won’t be overly concerned about her. He’s obviously underestimating Eve’s devious powers. She can be a real menace when she wants to be. Days fans know that Eve’s mean streak faded right after Paige (True O’Brien) died. It seemed like she was taking her life in a new direction, but she’s back to her old tricks now. 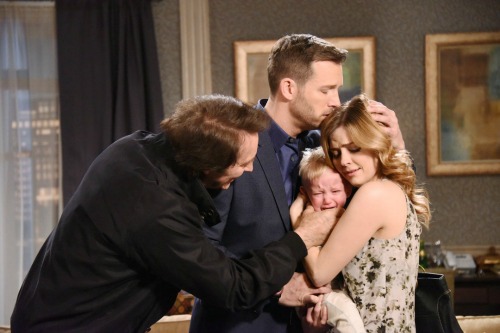 Of course, that works out great for DOOL viewers. Schemers are always welcome on soaps! Days of Our Lives spoilers say Eve will put her latest plan in motion and await Kiriakis chaos. She’ll hope that Brady will understand what he’s dealing with. Eve isn’t an enemy who should be taken lightly.

Later, Brady will make a shocking discovery. When he heads in Tate’s room, he’ll realize his son is missing. Uh-oh. Not again! Somebody should really think about calling child protective services. The only time we even hear about this poor child is when he’s been kidnapped.

Nevertheless, Brady will act like Tate exists for once. Days of Our Lives spoilers say he’ll panic over his boy’s disappearance. Brady will frantically try to locate Tate, but he’ll soon reach the conclusion that Eve’s to blame. He’ll confront her about stealing his kid and demand answers about where she’s keeping him.

However, it’s possible that Days is using a bit of misdirection here. Eve’s scheme may involve something else entirely. Brady might just be spouting off baseless accusations again. Eve’s reaction to the news should tell DOOL watchers a lot. If she freaks, Eve will be genuinely worried about her nephew’s kidnapping. If she’s calm and smug, Eve will probably be responsible.

Do you think Eve will take Tate as part of some twisted plot? Could someone else be behind the snatching instead? We’ll give you updates as other details emerge. Stick with the NBC soap and don’t forget to check CDL often for the latest Days of Our Lives spoilers, updates and news.