Days of Our Lives Spoilers: Hope The New Commissioner – Power Could Go to Her Head 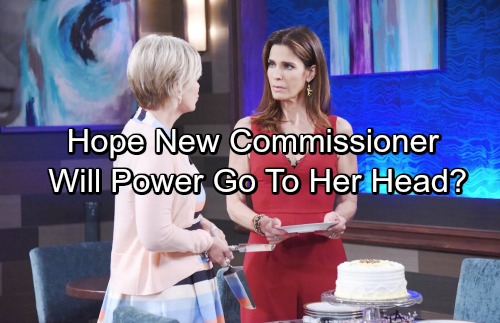 Days of Our Lives (DOOL) spoilers for September 2017 reveal that Abe Carver (James Reynolds) must find a new commissioner. The candidates are Hope Brady (Kristian Alfonso) and Rafe Hernandez (Galen Gering.) It is hinted that Hope becomes a woman of great power. This seems to indicate that she will get promoted to commissioner. If this happens, will having all that power go to her head?

It is interesting that Hope might get chosen as the commissioner rather than Rafe. They are both dedicated detectives, but Hope has a checkered history. Most of the incidents can be explained or justified. Most coveted positions in law enforcement require a spotless record. However, Salem doesn’t go by the same rules.

Days of Our Lives spoilers tease that the “Rope” romance will get rocky. Even though the relationship is currently going through some tension, things will get worse. With Hope in charge, she will be calling the shots. Rafe won’t always agree with some of her decisions. There could also be other changes when she accepts the job.

Hope Brady has always been relatively level-headed. However, a sudden increase in power can change a person. That is likely what happened with Commissioner Raines. At one time, he was probably a good cop. Unfortunately, power and greed can cause people to do questionable things.

Days of Our Lives spoilers indicate that Hope will remain a dedicated law enforcement officer. She won’t break the law or abuse her authority with civilians. Where the power could go to her head is how she deals with her peers. Mainly, how she communicates with her partner and fiancé, Rafe Hernandez.

She can’t play favorites or give him special treatment. However, she could use the commissioner position to put Rafe in his place. Hope prefers to be treated a certain way on the job. She doesn’t like to be questioned, berated or embarrassed.

Unfortunately, Hope is already annoyed with how Rafe is treating her in front of others. He teased the detective and put her on the spot. In Hope’s mind, he was being disrespectful and treating her like a subordinate. Hope has always been independent and likes to be in charge.

While “Rope” were equals before, she might use the promotion to force Rafe to respect her. She could do it in front of the other officers, too. However, she may go too far. Instead of commanding respect, she could end up with an oversized ego and a shattered romance.