Days of Our Lives Spoilers: Is Brady Turning into Deimos 2.0? 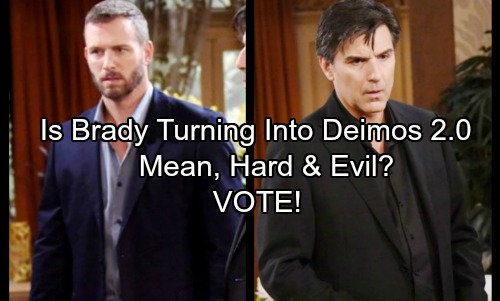 Days of Our Lives spoilers reveal that Brady Black (Eric Martsolf) is really crossing some dangerous lines. Instead of being the eternally heartbroken macho hero, he is turning into somebody fans don’t like. Is Ron Carlivati evolving this fan-favorite into Deimos 2.0?

With Andre DiMera (Thaao Penghlis) turning into a good guy and Deimos Kiriakis (Vincent Irizarry) dead, a new villain is needed. Even though they could cast somebody, Ron Carlivati previously confirmed no new characters until 2018. This means that someone already on the canvas needs to be the big bad wolf.

So far, it seems that Brady has been chosen to be the new villain on DOOL. With his current storylines, is he becoming Deimos 2.0? It seems so, especially with Days of Our Lives spoilers hinting he will get revenge for the “Ericole” romance. 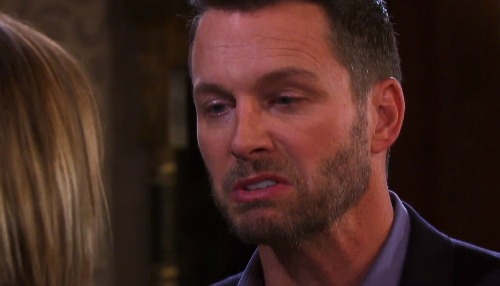 It isn’t just about revenge, but the way that Brady is carrying himself. He is using every instance to brag about how he is responsible for Nicole getting baby Holly. He could have been humble about it, but wanted to use it to tip the scales in his favor.

He also has a key piece of information about Nicole on DOOL. Spoilers suggest that he will get revenge by threatening to expose her as Deimos’ killer and blackmailing a judge. These are some things that the real Deimos would do.

Days of Our Lives spoilers hint he is even competing to take control of Titan, which rightfully belongs to Sonny Kiriakis (Freddie Smith) It seems that they really are setting up Brady to be an evil character now.

What will be the future for Brady Black on DOOL? How far will he go in order to get what he wants? In his quest for vengeance, desire for control and succumbing to his alcohol addiction, expect Brady to just get worse.

Eventually, he will want to be the man in charge of his family’s fortune. Could he one day try to oust Victor (John Aniston) and become the new leader of the Kiriakis family? Will nothing stop him from turning into Deimos 2.0?