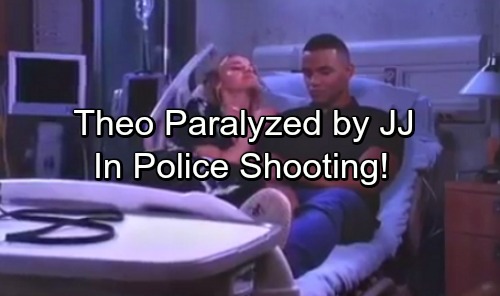 Days of Our Lives (DOOL) spoilers tease that major trouble is headed JJ’s (Casey Moss) way this fall. He’ll face a terrible ordeal on the job, but there’s a good chance Theo (Kyler Pettis) will get the worst of it. There’s no confirmation on the details just yet, but we have some huge clues to point us in the right direction.

Kyler Pettis’ final scenes were leaked and they offered a hint about Theo’s upcoming exit. In those scenes, Theo mentions that he’s been stuck in a hospital bed for a long time. He also talks about leaving to take part in some sort of year-long program. There’s even been some Days buzz about JJ and Theo being involved in a plot together soon.

Plus, JJ is currently dating Lani (Sal Stowers). That adds another interesting element here. When you add up all the clues, it’s easy to craft a solid explanation. JJ will likely shoot Theo during a tense showdown. He probably won’t know he’s pumping a bullet in a friend of the family. It might be a case of mistaken identity or even just a poorly aimed shot. 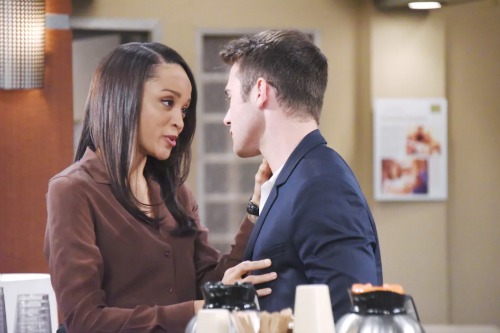 It looks like JJ will take a bullet as well, but Theo is the one to worry about. Since he’s going to be cooped up in a hospital bed for months, Theo may be partially paralyzed. JJ will inevitably battle extreme guilt throughout all of this. It could put a strain on his relationship with Lani.

Days of Our Lives spoilers say we will see conflict on a personal level. Abe (James Reynolds) and Jennifer (Melissa Reeves) may have a bit of a beef. Rafe (Galen Gering) and Hope (Kristian Alfonso) will feel caught in the middle. In addition, Days spoilers state that Jack (Matthew Ashford) will have some scenes with JJ down the road. Perhaps Jack’s spirit will appear to JJ as he frets over the damage he caused.

It sounds like some gripping moments are coming up this autumn. We’ll give you updates as other Days of Our Lives news comes in. Stay tuned to DOOL and don’t forget to check CDL often for the latest Days of Our Lives spoilers, updates and news.