Days of Our Lives Spoilers: Marlena Grills Ben to Learn Truth About Will’s Survival and Location 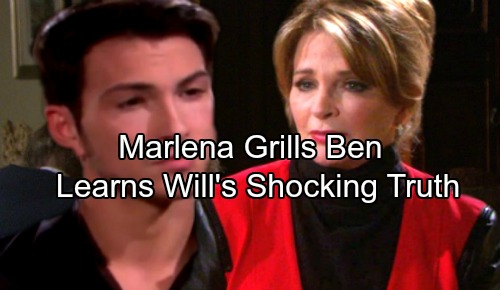 Days of Our Lives (DOOL) spoilers tease that Ben’s (Robert Scott Wilson) upcoming revelation will understandably be doubted. This guy is a psychotic murderer who’s been locked up in a mental institution. No one in his or her right mind would take Ben’s comments at face value.

However, Ben will mention something that Sonny (Freddie Smith) feels the need to look into. When he realizes Will (Chandler Massey) might be alive, he’ll do his best to pry more answers out of Ben. Of course, Days fans know Ben likes to keep the upper hand. He’ll play mind games with Sonny and refuse to offer any real details.

Sonny won’t want to get his hopes up next week. He’ll wonder if Ben could be lying or just spouting off his own crazy version of the truth. Still, part of Sonny will be optimistic over Will’s slim chance of survival. Sonny needs to remember that anything’s possible in Salem!

Fortunately, Will is indeed alive. It’ll just take a while for everyone to confirm it. Days of Our Lives spoilers say Paul (Christopher Sean) will come with an idea to sort this out. He’ll probably think Marlena (Deidre Hall) would be the perfect person for the job. If anybody can make Ben open up, it’s “Doc.”

As Salem’s go-to therapist, Marlena knows all the tricks in the book. She can convince just about anyone to spill his or her guts. Ben may be one of Marlena’s toughest cases, but it’s a challenge she’ll be willing to accept. There’s nothing that would please Marlena more than getting her grandson back.

Days of Our Lives spoilers say Marlena will agree to sit down with Ben for this difficult chat. It’s worth mentioning that Ben attacked Marlena during the necktie killer storyline. Marlena managed to escape death, but just barely. She was lucky since Ben’s other victims faced gruesome fates – except for Will apparently. Starting in those cold eyes should be brutal for Marlena!

DOOL spoilers hint that Ben will talk in riddles and beat around the bush. Nevertheless, Marlena may secure at least one crucial clue. Memphis will likely be brought up during this conversation. Days viewers are ready to get Will back in the picture and this is how his return storyline will kick off.

It sounds like DOOL is gearing up for some fun shockers. We’ll give you updates as other news comes in. Stay tuned to the NBC soap and don’t forget to check CDL often for the latest Days of Our Lives spoilers, updates and news.