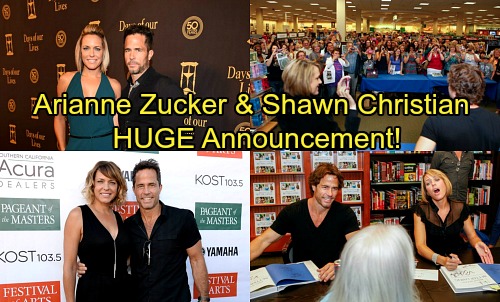 Days of Our Lives spoilers confirm that Shawn Christian and Arianne Zucker are both on a new journey. Christian left the role of Dr. Daniel Jonas last year, while his real-life partner, Zucker, stopped filming Nicole Walker scenes this past spring.

With her last air date being this Friday, the couple took the opportunity to share some exciting news with fans.

They appear to be working on a new project together, side by side. Many fans believe it is Zucker’s latest film, Eyewitness. While this is a possibility, that movie is already in post-production.

Last week, Zucker did announce on Instagram that she was arriving on set for a new project, but shared no details. It is not known if that is the same project she is working on with Christian or something else.

As for Shawn Christian, he is still filming Trapped. That should be wrapping up soon, giving him the time and flexibility to add to his ever-growing list of acting credits. Whatever they are working on together, we are sure it’s going to be a hit. Both are amazing actors who have great chemistry on and off the screen.

Days of Our Lives spoilers previously teased that Nicole Walker’s exit would be painful. After discovering she had a daughter with Daniel Jonas, a bitter custody battle ensued. Then, she realized she was in love with Eric Brady (Greg Vaughan.) Brady Black (Eric Martsolf) is determined to make her pay, though.

He truly is turning into a villain and it is leading to Arianne Zucker’s final scene. The character promises to return one day.

Days of Our Lives spoilers hint that Arianne Zucker might be back on the soap one day. She wouldn’t give a definite answer, just that anything can happen in the future. Remember, she left and came back once before.

As for Shawn Christian, his character died on the daytime series. However, he has come back as an apparition a few times. While it is unlikely he would return full-time, the dead have been resurrected before it could happen again.

Congratulations to both soap stars in their newest project! Keep watching the NBC soap and check back with CDL for the latest Days of Our Lives spoilers, updates and news.