Days of Our Lives Spoilers: Two Weeks Ahead – Eve Donovan Returns – Battles Victor and Brady For Custody of Tate 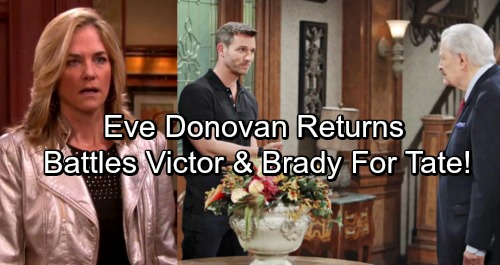 Days of Our Lives spoilers for the week of October 23 reveal that Eve Donovan (Kassie DePaiva) returns. What could possibly bring her back into Salem? We have been able to confirm that it is connected to Victor Kiriakis (John Aniston) and Brady Black (Eric Martsolf.)

Expect to see Eve pop back on television screens on Friday, October 27. Victor and Brady are stunned to see Theresa Donovan’s (Jen Lilley) sister. It’s been a long time, but there is a reason for her visit. The woman is on a mission.

Days of Our Lives spoilers suggest Eve has heard all about Brady’s drinking. She has been informed of Brady’s dirty deeds and his transformation into a villain. Concerned about her nephew, Tate, she wants custody of the little boy. 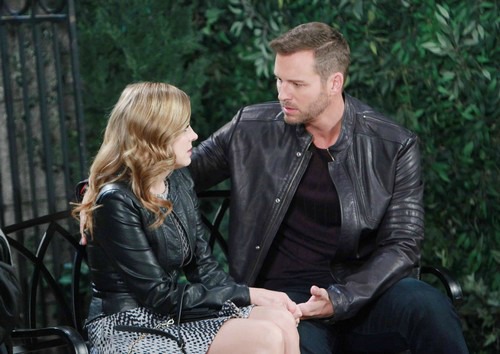 Theresa isn’t around to keep him safe anymore. Now that Nicole Walker (Arianne Zucker) is leaving, there is nobody to protect him. Especially with all the drama surrounding Bonnie Lockhart (Judi Evans.) This is just going to make Eve even more worried about Tate’s safety.

The Kiriakis mansion isn’t exactly the best environment for a child. Especially with the Bonnie drama, Brady’s drinking and acts of vengeance. It only makes sense this is the bombshell Eve is dropping on the family. 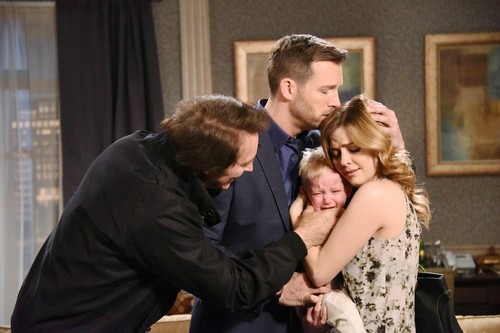 Days of Our Lives spoilers reveal that Eve Donovan’s return won’t be all work and no play. It was previously teased to expect her to get involved in a romance. All that has been released is that it is with someone already on the canvas.

After Adrienne Kiriakis’ (Judi Evans) release from prison, she will get back together with Justin Kiriakis (Wally Kurth.) So, it can’t be him, but perhaps she will start to develop feelings for Brady. That’s right, the same man she is fighting for custody of Tate.

How will this all turn out in the end? Expect complications, bombshells and more secrets to be exposed. In the meantime, keep watching the NBC soap. Remember to check back with CDL for the latest Days of Our Lives spoilers, updates and news.