Days of Our Lives Spoilers: Steve Poisoned by a Shocking Enemy – Patch Threatened With Blindness 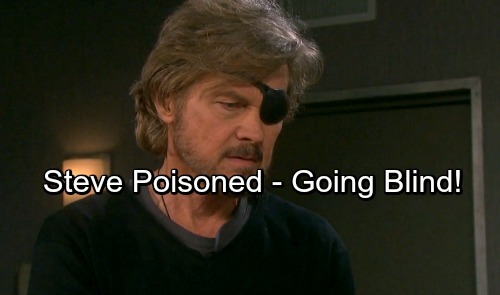 Days of Our Lives (DOOL) spoilers tease that Steve (Stephen Nichols) has a health crisis headed his way. At first, he’ll just face a couple minor symptoms. Steve will battle some blurry vision along with a few headaches here and there. He’ll brush his issues off as nothing, but they’ll slowly get worse.

It looks like Steve will also deal with other little incidents. He might have some slight personality changes or bouts of forgetfulness. Steve will remain in denial as long as he can, but he’ll eventually have to seek some help. Kayla (Mary Beth Evans) will undoubtedly pick up on Steve’s problems sooner or later. She’ll want her hubby to get checked out ASAP.

After all, Steve only has one good eye. If he starts going blind, that would be absolutely devastating. What sort of serious condition will be plaguing Steve? It turns out this isn’t something sparked by natural causes.

Days of Our Lives spoilers say someone will target Steve for a sinister reason. Another character will apparently be out for revenge and poison will be his or her method of choice. Many DOOL fans have been hoping Steve and Kayla would get a big story. It seems they’re about to get their wish. This certainly seems like an intriguing, meaty mystery for the couple to tackle.

Unfortunately, Days spoilers state that Steve won’t be at the top of his game. He’s normally great about cracking cases, but his health woes could make that difficult. If Steve’s enemy is smart enough, the poison may be tough to detect. Steve and his doctors may not know what’s harming him right away.

Days of Our Lives spoilers say Kayla won’t give up. She’ll be determined to help Steve make a full recovery. Once they finally nail down the cause, they can focus on who poisoned Steve and why. Perhaps Steve will get some assistance from John (Drake Hogestyn) and Paul (Christopher Sean) down the road.

Kate (Lauren Koslow) will likely be Steve and Kayla’s top suspect since they’ve been at war with her lately. However, Days spoilers indicate that the guilty party will be quite surprising. Since Kate wouldn’t be surprising at all, we can probably eliminate her as an option.

Kayla and Steve will continue their efforts to solve this mystery, so expect some shockers. DOOL viewers won’t want to miss all the drama happening in 2018. We’ll give you updates as other news comes in. Stick with the NBC soap and don’t forget to check CDL often for the latest Days of Our Lives spoilers, updates and news.