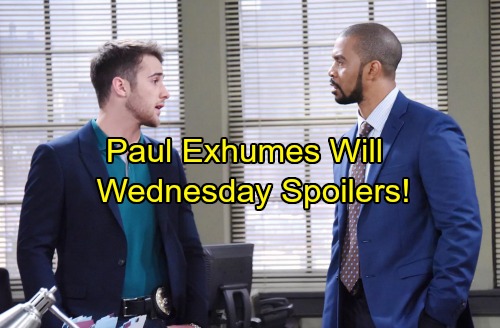 Days of Our Lives (DOOL) spoilers for Wednesday, October 4, tease that Paul (Christopher Sean) will have a suggestion for Sonny (Freddie Smith). He thinks Ben (Robert Scott Wilson) is just blowing smoke, but he can tell that Sonny needs closure. Paul will decide he’s willing to do whatever it takes to help Sonny get past this.

DOOL spoilers say Paul will bring up the idea of exhuming Will’s (Chandler Massey) body. Sonny won’t be sure he wants to disturb Will’s grave, but he’ll eventually get on board. It’s the only way to figure out if Ben might be telling the truth.

Unfortunately, Sonny and Paul will have trouble putting this plan in motion. They’ll face some resistance from Lucas (Bryan Dattilo) later this week. In the meantime, Rafe (Galen Gering) and Hope (Kristian Alfonso) will mull over the investigation. They’ll have a hard time understanding Ben’s claims and what he’s trying to accomplish.

Of course, JJ (Casey Moss) will have to be punished for his latest spectacle. Pulling a gun on Ben wasn’t the best choice, but JJ just couldn’t take it anymore. Ben obviously knows how to push all the right buttons. Days spoilers state that Hope will get updates on JJ’s shocking actions. She’ll confiscate his weapon and badge as she hands down a suspension.

Elsewhere, Chad (Billy Flynn) and Abigail (Marci Miller) will move forward with their wedding plans. The “Chabby” nuptials are back on! Days of Our Lives spoilers say Chad will make Abby his wife and they’ll begin the rest of their lives together. They’ll be on cloud nine by the time this night wraps up.

The end of the week will bring more romance for Abigail and Chad. After everything they’ve been through, this couple deserves some happiness. Sonny is also seeking a bright future, but finding Will could mean breaking Paul’s heart. Some tough moments are coming up for Sonny and his love interests. Stick with Days of Our Lives to watch them sort out this mess.

It sounds like some exciting scenes are in the works. We’ll keep you posted as other Days news emerges. Stay tuned to DOOL and don’t forget to check CDL often for the latest Days of Our Lives spoilers, updates and news.