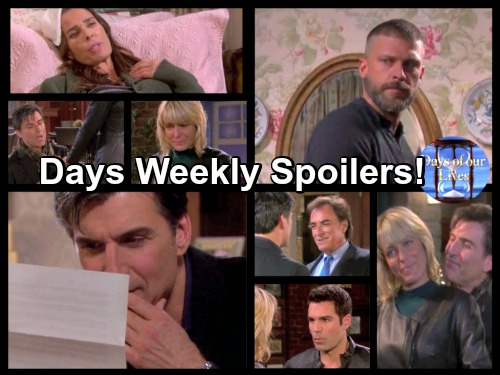 Days of Our Lives (DOOL) spoilers for the week of January 16-20 tease that we’ll see some surprises on the NBC soap. First, Chloe’s (Nadia Bjorlin) confession will be derailed by Deimos’ (Vincent Irizarry) threat as well as her weak condition. Chloe needs to rest and that means the baby revelation will have to wait.

Elsewhere, Sonny (Freddie Smith) will urge Deimos to chill out. It’s clear that Deimos has a bad temper and that will only fuel the flames of his battle with Andre (Thaao Penghlis). Unfortunately, Eduardo (A Martinez) and Dario (Jordi Vilasuso) will be just as outraged before the week is over. 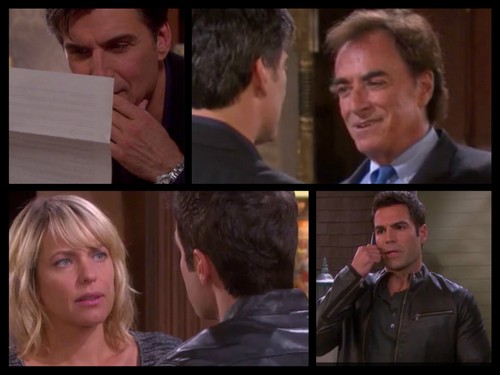 Dario will even order a hit on Deimos, but there’s a good chance things won’t pan out like either of them expects. In Prague, Steve (Stephen Nichols) will get a shock when Anna (Leann Hunley) accidentally shoots him. Once Kayla (Mary Beth Evans) hears the news, she’ll immediately book a flight.

Days of Our Lives fans can expect some romantic moments for Steve and Kayla down the road. However, Rafe (Galen Gering) won’t have time for anything but his mission. He’s determined to find Stefano (Joseph Mascolo) and clear Hope (Kristian Alfonso) before it’s too late. 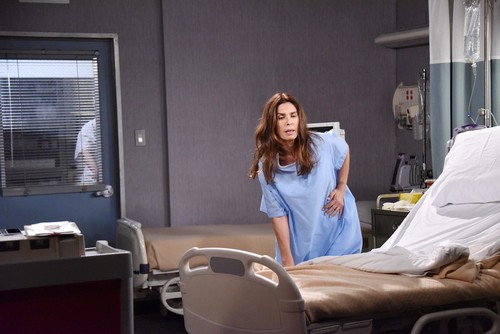 Speaking of Hope, she’ll end up in Eric’s (Greg Vaughan) care this week. These two have a lot to catch up on. Meanwhile, Abigail (Marci Miller) will become concerned about Chad’s (Billy Flynn) connection to Gabi (Camila Banus). She’ll worry that their bond is just too strong to ignore.

Nevertheless, something else will be on Abigail’s mind soon enough. She’s getting suspicious about the DiMera and Kiriakis war. When the Hernandez family gets involved, Gabi will also find herself agonizing over the threat. Abigail and Gabi will eventually join forces to protect those closest to them. 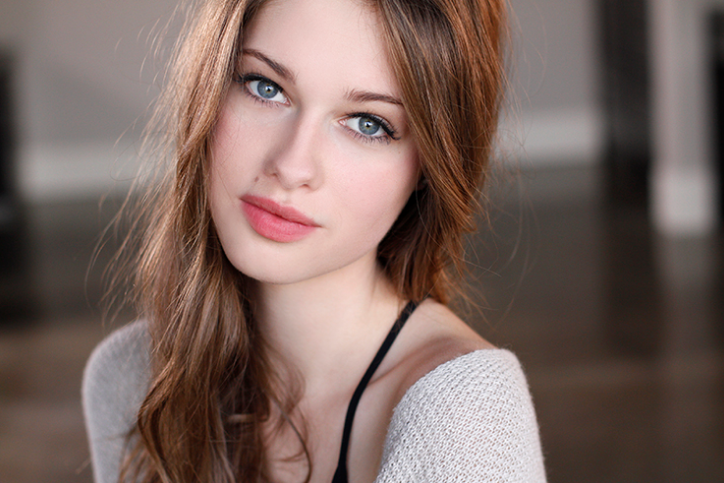 Other Days of Our Lives spoilers reveal that Jade will get a new face. Gabrielle Haugh will debut in the role this Tuesday. It seems DOOL won’t skip a beat. Jade will immediately join Joey (James Lastovic), Theo (Kyler Pettis), Claire (Olivia Rose Keegan) and Ciara (Vivian Jovanni) for some planning.

These teens will decide to find a place and move in together. This sounds like a disaster waiting to happen, especially since Ciara and Claire are both in love with Theo. At least Days viewers will get some drama out of it!

DOOL has plenty of excitement on the way. We’ll give you updates as more Days details emerge. Stay tuned and don’t forget to check CDL often for the latest Days of Our Lives spoilers, updates and news. Come and join in the LIVE discussion on our Facebook Page.