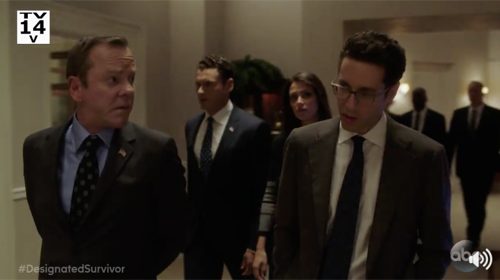 Tonight on ABC their new conspiracy thriller Designated Survivor airs with an all-new Wednesday, October 25, 2017, episode and we have your Designated Survivor recap below. On tonight’s Designated Survivor season 2 episode 5 called “Suckers,” as per the ABC synopsis, “A private conversation with the president is misrepresented on the news by a senator, and the result requires Kirkman to win back the American people’s trust. Meanwhile, Damian and Hannah join forces to help solve an international murder.”

A female member of parliament, Charlotte, Thorne, is running through the woods. She hears a crackle. She calls out to see if someone is there. The mysterious person comes out from behind a tree and shoots her in the head.

The president is at hockey. After the game, he talks to a senator about improving consumer confidence. He gets word from secret service about the woman who was murdered. He heads back to the White House. The president talks to Alex. He suggests Kendra help her mother. She hesitates but agrees.

The senator goes on air and tells the American people that the president referred to them as suckers. A media firestorm breaks out with a handle of major leaders calling the white house to speak to the president. Leo and Emily aren’t happy that the senator lied, but the president tells them he didn’t do exactly that. He took his words out of context but he didn’t lie. Leo wants the president to lie about what he said, but he refuses.

In the meantime, Hannah works on Thorne’s murder while Alex meets with Kendra. Alex wants Kendra to show that she will protect her family. Kendra has helped 11 senators with their legal woes and no one has been convicted. She asks Alex to trust her and she can do her job.

Seth fights back questions from the press while Leo and Emily panic as the president loses support on his pension bill. The president interrupts a meeting with Seth and a group of CEOs. They don’t welcome him warmly. The president walks to his room that night and talks to Langley.

Langley has great advice for him. He knows the president isn’t a mudslinger but he needs to fight back and give people hope,

Hannah finds her way on a boat looking for a man by the name of Darius Cray.

The team briefs the president on the latest news. Aaron informs him that Hannah has fund Darius who they believe is connected to Thorne’s murder. The president tells them he wants to do an OTR. Seth, Leo, and Emily aren’t happy about the idea but they get to planning.

Alex shows up at court. She tells Kendra she wants to sit the second chair. Kendra doesn’t think that is a good idea, but Alex insists. During the arguments, Alex jumps up and speaks. She tells the judge she is Kendra’s co-council. Kendra is taken aback. They take a 10-minute recess. Kendra tells Alex she needs to step down.

The president holds an OTR at a local diner. It goes well until he is questioned outside about Suckergate. Things go sideways. Leo and Emily bring him back to the White House. They tell him that everyone is turning against him. He needs to hold a press conference and lie his way out of it.

Kendra returns the courtroom. Alex stays quiet. Kendra defends Alex by pointing out that her rights were violated when Agent Wells took her father’s medical files. The opposing council points out that Wells works for the White House, but the judge doesn’t care. Alex’s rights were violated.

Hannah answers the door of her apartment in a tank top with a glass of wine. It is Damian. He has come to say goodbye. He kisses her. She pushes him away, but changes her mind and kisses him back. Her phone rings. There has been a break in the case. They head to the office. Cray didn’t kill Thorne because he was loading guns in a van on camera.

The president holds his press conference. He doesn’t lie but explains that he too is a sucker for believing in the American dream and a brighter future.

The senator shows up that night to speak with the president. He apologizes and wants to talk. His wife has cancer. He admits to taking comfort somewhere else. He and his wife were going to divorce but they are working through it. He admits he needed a victory and took the only opportunity he saw. The president accepts his apology. The president shows him a folder, photos of him and his mistress. Tom didn’t use it against him. He could have but he didn’t. He tells him he needs to take care of it.

Seth, Leo and Emily look at the poll numbers. The president did all right!

The president calls the Victims Advocate from the OTR in. He has done his homework. He knows she isn’t a victim, but the wife of a perpetrator who stole money from innocent people. He pledges to her that he will do everything in his power to do right by the people like she has.