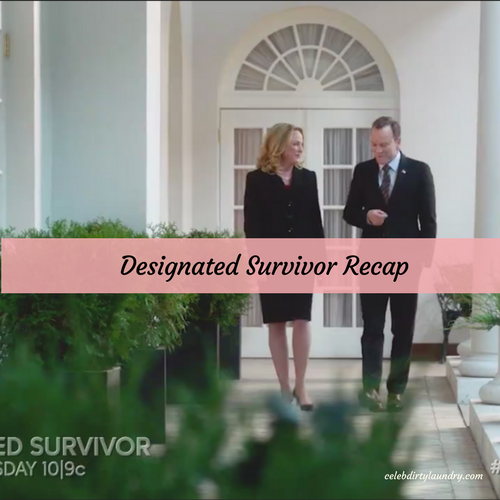 Tonight on ABC their new conspiracy thriller Designated Survivor airs with an all-new Wednesday, April 26, 2017, episode and we have your Designated Survivor recap below. On tonight’s Designated Survivor season 1 episode 18 called “Lazarus,” as per the ABC synopsis, “As President Kirkman (Kiefer Sutherland) considers candidates for vice president, Kimble Hookstraten finds herself embroiled in scandal.”

Tonight’s episode of Designate Survivor kicks off where we left off last week – Hannah and Jason have just discovered what appears to be a secret community meeting in the middle of the night in a field. They’re shocked when they see that Lozana is very much alive. Then men at the meeting notice Hannah Wells and her partner spying on them. They chase them down and a shootout ensues, Hannah and Jason make it out, but not unscathed, he’s bleeding from a gun shot wound.

Abe Leonard gets a phone call from the mystery tipster that has been leaking him information – the tipster tells him that the White House is covering up the Capitol bombing and to look in to the name Jason Atwood. Abe is determined to track down the tipster, all he has is a license plate to go on, but when he traces the license plate he learns that the tipster was driving a White House car and most likely works there.

At the White House, Kimble and President Kirkman are signing the gun control bill that they pushed together through Senate. After the signing, Tom takes Kimble aside and tells her he wants her to serve as his Vice President. As soon as they do their vetting – they will make an official announcement.

Hannah heads back to the office and fills her boss and the Chief of Security in on what she and Atwood saw – they have a tough time believing that Lozana is alive. Hannah is determined to prove it, she heads to the morgue to take another set of prints off from the body that they identified as Lozano. Washington is buzzing with Kimble

Washington is buzzing with Kimble Hookstraten and President Hookstraten’s budding new partnership. However, Jack Bowman is seething. He meets with a shady guy named Liam Price who claimed to have “something good” for Bowman. A few hours later a story about Kimble hits the internet titled “Hookstraten’s Turkish Delights.”

Aaron, Emily, and Seth begin panicking over the Hookstraten news story, the press is alleging that several years ago she took bribes from Turkish leaders for an aid package. Kirkman thinks that its all smoke and mirrors, and he’s not buying it, he wants to talk to Kimble about it in person. Aaron is fuming, he tracks down Jack Bowman and accuses him of planting the story.

Mike pulls Tom aside and warns him that there is a chance that Lozano is alive. Hannah discovered that the body in the morgue doesn’t belong to Lozano. Apparently, someone hacked the database and switched Lozano’s fingerprints with the man the FBI killed to make him appear dead. Tom sits down with

Tom sits down with Hookstraten, she insists that nothing illegal happened with her deal with Turkey. While she and Tom are chatting about it, they get bad news. Emily rushes in and says that the Ethics Committee just opened a formal investigation in to Hookstraten’s trip to Turkey.

Despite Emily’s warnings, Tom won’t let go of the idea of Hookstraten as his Vice President – even if she is one of the most hated women in the news right now. Tom wants the White House to stand by her, and help clean up the publicity mess. Emily has Seth call a press meeting to try and clear up some of the negative rumors about Hookstraten.

Jason Atwood is trying to enjoy a cup of coffee at a diner when Abe Leonard tracks him down. Jason refuses to speak to him and heads to his car – Abe trails behind him rattling off questions about the Capitol bombing. Jason hits him in the ribs and gets in his car and rides off.

Jason fills Hannah in on his meeting with Abe Leonard – he rants that Abe knew some things that were never released to the public, he has to have a leak at the white House. Hannah tells Jason to lay low and heal his arm, he’s no good to her until his gun shot wound is healed up.

Hookstraten summons Liam Price to her office – he proudly admits that he leaked the story. Apparently, it was payback for her firing him. Hookstraten points out that she fired him because he was taking money from lobbyists, and she can still go public about it.

Hannah pours over surveillance footage, and she finds proof that Lozano left the building very much alive after the FBI thought that they had shot him dead. Mike meets with President Kirkman and warns him that they were right – Lozano is still very much alive, and could still be trying to take him out. They’re going to tighten security.

Hannah finally gets the ID on the body in the morgue that’s not Lozano, apparently the dead guy is named Desmond Legarth, and he has ties to a business man named Patrick Lloyd and his company Browning Reed. Hannah meets up with an old source of her’s to get intel on Patrick Lloyd.

Hannah and Foerstel track down Patrick Lloyd at his ranch to question him about the bombs they found on his property a few days ago. Lloyd claims that they were all purchased by his company Browning Reed before he dissolved it, and he has all of the proper permits on them. Lloyd is very patriotic, and despises the American government. He rants about oppression of the government before he rides off, and Hannah recognizes what he is saying from the manifesto that she and Jason found at the secret meeting in the woods that Lozano was attending. The pieces are starting to all come together.

Hannah is determined to prove that Lloyd is the man behind the Capitol bombing and planting Tom in the White House. Foerstel tries to warn her that taking down Lloyd is not as easy as it sounds – he’s protected legally, financially, and his team is evasive.

Tom calls his daughter at Camp David to check in on her and his wife Alex. His daughter is thrilled about a woman being his Vice President, Tom doesn’t have the heart to tell her that it may not work out.

Hannah heads back to her motel room late at night – but she can tell that someone else has been there. She rushes to her car, but a man dressed in black grabs her and stabs her in the neck with a syringe. Her limp body is loaded in to the back of a van and the van speeds off.Tonight’s episode ends with Abe meeting with the tipster in the dark parking garage – he tells Abe to check the White House log for the day after the shooting.

Tonight’s episode ends with Abe meeting with the tipster in the dark parking garage – he tells Abe to check the White House log for the day after the shooting.

The tipster calls Lozano and tells him that everything is back on track – Lozano is riding in the van that just kidnapped Hannah.