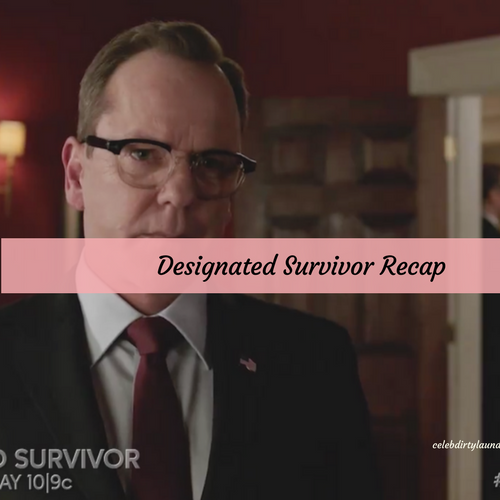 Tonight on ABC their new conspiracy thriller Designated Survivor airs with an all-new Wednesday, April 5, 2017, episode and we have your Designated Survivor recap below. On tonight’s Designated Survivor season 1 episode 15 called “One Hundred Days,” as per the ABC synopsis, “As President Kirkman (Kiefer Sutherland) releases an agenda to reset his presidency, Alex makes a controversial public statement that threatens to derail it.”

The president is having a press conference. He would like to reset the clock and begin his 100 days now. He will hold a town hall meeting at the local college. He wants to get back to governing with the crisis behind them.

Hannah is still looking for Claudine and her relationship with Langdon. She is working with Chuck who manages to pull fingerprints off a wine glass in a picture. He runs it through the database.

Seth and Emily help direct the team as they receive calls on hot button issues. The president shows up. They tell him they are getting calls and building support for his upcoming town hall meeting.

Aaron is running through the park. He gets a call. His cousin is in town. Meanwhile, the first lady holds her own press conference on the issues of woman. She takes a round of questions. She answers one question on practicing law and one on gun control.

Hannah visits Jason. She tells him that she knows who killed Luke. She knows where the woman is and she needs back-up.

The president watches the news. Media outlets are attacking the first lady’s gun comments. Emily and Seth advise him to talk to the first lady. He goes home to see her. She apologizes. He tells her to publicly walk back her comment. She smiles. She is game for walking it back.

Aaron and his cousin go to visit a Congresswoman. He has vouched for her and hopes to get her a job.

Hannah and Jason are in the car. They almost get into an accident. Jason loses his temper and gets out. Grabbing the guy through the window. He is just a reckless driver, Hannah tells him. She wants to take him home. She needs a partner not a loose cannon. He walks home.

Hannah pulls outside of a bunch of dark buildings with her gun ready. She makes a call. The place looks cleared out. She doesn’t know someone is watching her through a camera.

The team preps the first lady for her conference. She tells Tom she isn’t good at playing the submissive wife role. She loves him so she will do this. She does great at answering all of the questions.

Aaron and his cousin are going for a walk. She wants to know why he left the White House. She reminds him that he came to DC to make a difference. And that is why she came too.

Chuck tells Hannah that a company Brown Reading is still paying the taxes on the building that has been vacant for 10 years. She asks him to check it out. She smells gas. They run for it as the building explodes. They make it out okay, but Chuck can’t hear.

The president does a practice run with questions from the public with his team. He tells Emily to talk to him like a person, not the president. They want him to be personable and not sound like a professor. Seth throws a question about pornography at him.

He meets with several senators. He wants to create a partnership. He tells Bowman that he wants to come to a consensus on gun control. Before leaving the white house, Bowman talks to the press about passing a bill that will back the president into a corner.

Hannah returns to the building. Jason is waiting in the dark for her. They team up and go in together. She sees a computer monitor with video paused of her. Shots are fired. A woman comes out of nowhere. They fight. Jason comes from behind. He aims the gun at the woman. Hannah wants to take her in, but Jason has a hard time controlling his temper. He fires 2 shots, missing her and scaring her. She whirls around and shoots. Jason and Hannah shoot her dead.

Aaron runs into Emily and tells her the news. She wants to know how he could work for a republican when he is a democrat. With Tom as an independent and president, Aaron doesn’t think party lines matter that much.

Hannah looks through the woman’s computer. She had plans to blow up lady liberty and the golden gate bridge.