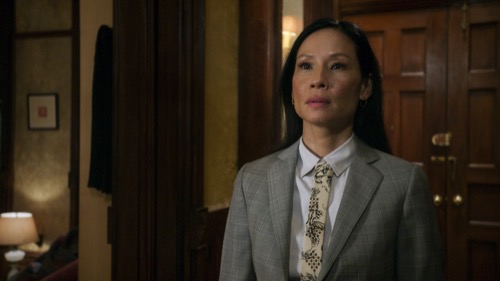 Tonight the CBS series Elementary airs with an all new Sunday, May 21, 2017, season 5 episode 24 and we have your Elementary recap below. On tonight’s episode called, “Hurt Me, Hurt You” as per the TV Guide synopsis, “Season 5 ends with Holmes (Jonny Lee Miller) and Watson (Lucy Liu) pursuing an elusive criminal as a gang war erupts in New York City. While the NYPD works to contain the violence, the two investigate the murder that appears to have ignited the city-wide conflict and discover that a familiar face is pulling the strings.”

Sherlock worries he is losing his touch. Watson asks Sherlock if he is using again. He has been sleeping a lot and is so distracted. He angrily denies it. A group of SBK are partying in the street when three men open fire with machine guns killing them all. 6 gang members, 3 girlfriends, and 2 children were killed. A gang war is now on due to Bonzi being out of the game. The fight for control is on. Sherlock goes to see someone to see if he is willing to do something to stop the war.

Sherlock goes to a priest and tells him he knows that he has been helping Mara Tres (the SBK rival) laundry money. He wants the priest to tell the leaders of Mara Tres that a war isn’t necessary. Sherlock and his team will bring down SBK and then they can take the territory. They just need more time. The team goes to Tyus and warns him they are on his tail and they will bring him down. He makes vague threats toward the police and tells them to leave.

The strange woman from Sherlock’s 12 step program is in his house when he returns. She tells him she loves him and that he needs to do the right thing or he will never see her again. Two members of Mara Tres come to Sherlock’s home and take him to meet with their leader. The leader, Halcon, tells Sherlock that they didn’t start this war. Someone from SBK killed his sister yesterday morning and left her body at his lawyer’s house. He had to retaliate for what they did. He thanks Sherlock for the message but he and the police need to stay out of his way because he won’t stop until every SBK member is dead.

The team meet with Tyus again and the chief promises they won’t prosecute him if he admits his role in SBK. He says he did not order the hit on Halcon’s sister but he will try to find out who did it. They are all in agreement that someone is setting up SBK. Watson interviews Halcon’s sisters roommate and she says the man who took her away right before she was killed was dressed like a gang member but didn’t act like one. He didn’t have any tattoos and was nervous holding a gun. She doesn’t think it was a SKB member but Halcon is convinced it was.

Tyus turns himself in to the police and offers the name of every member of SBK. He will testify against each one of them. It will be the end of SBK and the war with Mara Tres. He also gives the name of the man who killed Halcon’s sister. Watson and Sherlock know that it can’t be true because that man had several tattoos and the killer had none. They both think Tyus killed her and is using this war as a way to turn on the gang and get immunity for himself.

The DA doesn’t care. He wants Tyus’s testimony and he will get immunity. Tyus calls Watson to taunt her and to let her know that she is the reason for everything that has happened the last three days. Shinwell’s death is on her also. Watson goes to the memorial service for Shinwell but no one is there. Sherlock had promised to meet her there but doesn’t show up. When she confronts him he says he forgot. They argue. Watson goes to meet with Halcon. She tells him she knows who killed his sister and with his help they can send him to prison. Once on prison Halcon can do whatever he wants. Halcon needs to give his sister’s body to the police. When that happens Watson will be able to prove Tyus is the killer.

The strange woman calls Sherlock to tell him goodbye. He hears something and finds that his house is on fire and she is trapped inside the dining room. He tries to save her but is thrown backward by the heat. The chief, Marcus and Watson meet with Tyus and his attorney. They tell them that after the ME examined the body of Halcon’s sister they have proof Tyus killed her. Because he lied the immunity deal is gone but all of his testimony will be used against his gang. He is going to prison for a long time. Sherlock goes to see a doctor. The woman we have been seeing is just a figment of his imagination. He is losing his ability to remember every detail of his life and is afraid to find out why. Sherlock goes to have an MRI.