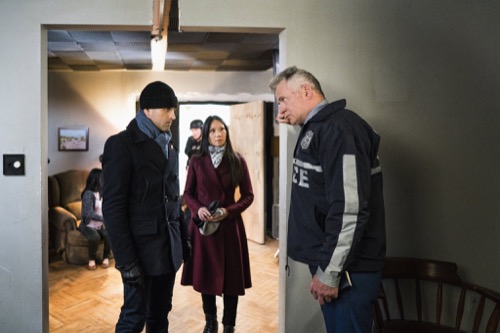 Tonight on CBS their crime comedy-drama Elementary premieres with an all-new Sunday, January 15, 2016, season 5 episode 12 called, “Crowned Clown, Downtown Brown” and we have your Elementary recap for you below. On tonight’s Elementary Season 5 episode 12 as per the CBS synopsis, “Holmes (Jonny Lee Miller) and Watson (Lucy Liu) investigate a clown’s murder upstate and discover a connection between his death and the creation of a new weaponized virus. Meanwhile, Joan helps Bell when he’s targeted by his new love interest’s ex-husband, who is trying to sabotage her career at the District Attorney’s office.”

Watson is trying to get Hill to help her father so he will stop writing books about her and Sherlock. Watson notices that Hill is going on a date. She’s excited for him. She wants all the details. Hill heads to the bar to meet her. She calls to say she needs a rain check. She’s stuck on a case. Hill goes to leave and accidently bumps into a man, knocking his drink out of his hand to the ground. It smashes. The man gets angry and shoves Hill, who offers to buy him a drink. The man explains that he wanted that drink not a new one. Hill says he’s a cop – he doesn’t want any trouble. The man starts swinging.

Two men are chasing a clown through the woods. He’s running fast. They fall behind when they catch up they see the clown dead on the ground in a pile of leaves. His body looks settled. There is no way he just died right there, 4 minutes ago? The men are confused, staring at him in disbelief with their flash lights pointed at his clown face.

The local police call Sherlock in on the murdered clown case. They are out in the woods looking at the dead clown trying to make sense of it. Sherlock has seen plenty of dead clowns as of late. The clown has been dead for 36 hours. There is no way it was the clown the men were chasing. The captain thinks there are 2 clowns. Sherlock wants to know what’s on the other side of the woods.

Chantel, Hill’s date shows up at his office. The man he punched the night before was her ex-husband.

Sherlock and the team call in a suspect. They get the guy to fess up to wearing a clown suit. They show him the photos of the dead clown. He is disbelief. He didn’t do it. Two night ago he was in Pittsburgh. The guy admits that he and another man were dressing up for prank-pertising – to promote a scary movie coming up. Sherlock visits the company site – AdRupt – and realizes that the man who wrote one of the articles is the dead clown. He was also a disgruntled employee.

The team goes to visit AdRupt. They talk to the boss, questioning him about his employee. The boss says that the clown came back to work for him and that their relationship was fine. Back at the house, Sherlock is working the case. Watson arrives and tells him about Hill’s situation. Sherlock shows her photos he found online of the clown the same night he died.

Hill and Sherlock head out to the woods. They discuss Hill’s situation with Chantel’s ex. They spot an impression as they look at the cold ground. They spot a manhole in the woods. Odd place. Sherlock shares that it is New York City’s drinking water. They open it up. Sherlock sees residue, poisonous residue. He tells Hill that the water has been poisoned. That’s why the clown was killed – he saw something. He tells Hill to make a PSA not to drink the water.

The team meets with city officials who thank them for discovering the residue which made it past all of their detectors. The officials won’t say much . The captain is mad. He wants to know why they want sure their data.

Watson and Sherlock know what it is though. Watson took his gloves to the la and had her friend run some tests. It’s a super bug created by someone Sherlock already has his eye on. Sherlock and Hill calls in the woman in question who was angry. She wrote a number of manifestos on mass murder. They don’t think she did it after all, but she might know who did – a biologist on the Upper East Side by the name of Raymond.

Hill and Sherlock head to his office. He isn’t there, he has been out sick. They look through his computer. They discover that he has created a super virus that can]t be detected but only gives people a stomach ache? It doesn’t make sense.

The team meets with city officials to share their findings. Sherlock explains that the super bug would have caused terror. One of the officials sees the teams point, but the other has other thoughts. He is angry that someone leaked the story. He wants to take the lead and asks the team to stand back.

Sherlock goes to the suspect and confronts him. He’s a developer who paid Raymond to build a super bug so that he could get the job and make millions on the city. He tells Sherlock that he makes his profits on UV, not filtration. Sherlock got it wrong. The suspect is someone trying to drive up the water filter market.

The captain heads to the precinct. He calls in the city officials. The team shares their findings about the home filtration system. The cooperating official is guilty – he is the owner of the filter company. He was in cahoots with Raymond.

Meanwhile, Hill realizes that Chantel’s ex was up to no good. He was out to ruin her life and her career. Hill threatens him before he speeds off in his car. It looks like he won’t be coming back.