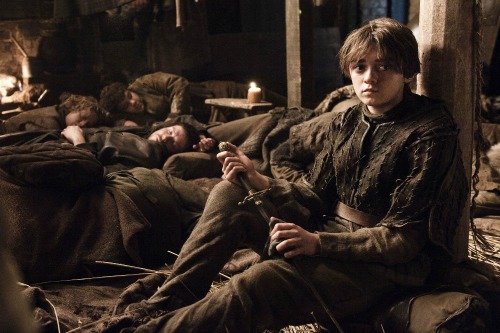 A recent promotional photo for HBO’s Games of Thrones season 7 has inadvertently given way to a major Game of Thrones spoiler! The photo, featuring the Stark siblings on the cover of Entertainment Weekly, could mean death for Littlefinger. The clue in this case is the dagger sitting on the hip of Arya Stark.

Fans of the series know that the whereabouts of the catspaw dagger was thought to be in possession of Petyr Baelish, aka Littlefinger. It hasn’t been seen since GOT season 1 when it was used in an attempt to kill Bran.

Seeing Arya toting the sword as she appears alongside Jon, Sansa and Bran could mean the death of Baelish in the upcoming season. Or at least the successful capture of the dagger. Will Aryra make an attempt on Littlefinger’s life and get away with the dagger?

The cover shot of the Stark siblings could also mean that Game of Thrones fans will finally see the long lost brothers and sisters reunite after being apart for so long. A possible reunion means Aryra will return home to Winterfell, cementing a face-to-face scene with Littlefinger.

In other Game of Thrones spoilers for season seven, a photo featuring Littlefinger and Sansa looking out over Winterfell also supports the possible reunion of the Stark children. It appears that Littlefinger will do his best to talk Sansa into taking over Winterfell.

This scenario will reportedly lead to a fight between Sansa and Arya. But GOT fans shouldn’t worry, if all the speculation and clues are right, the Snow sisters will get on the same side of the battle field as Sansa asks Ayra to kill Littlefinger!

It looks like all Game of Thrones spoilers – no matter how accurate – ultimately lead to the death of Littlefinger in Game of Thrones. The show is set to return to HBO on July 16 so come back to CDL for all your GOT spoilers and recaps!

Long live the Starks! We’ve reunited @GameOfThrones’ Jon, Sansa, Arya and Bran for our covers this week. 😯🙌🏽 Click the link in our bio to see more awesome exclusive photos from season 7. #GameOfThrones #GoT #GoTS7 📷: Marc Hom for EW

A post shared by Entertainment Weekly (@entertainmentweekly) on May 25, 2017 at 9:40am PDT