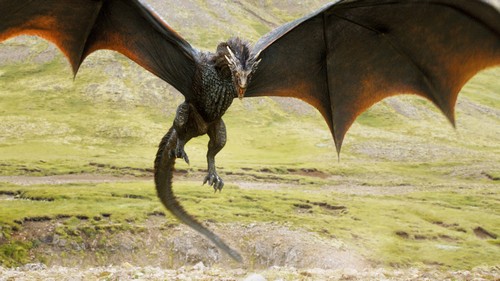 Game of Thrones Season 7 Episode 4 ‘Spoils of War’ had some truly spectacular battle scenes and moments, but has also led to rampant spoiler speculation that Daenerys’ (Emilia Clarke) dragons, previously considered all but immortal, will die.

Qyburn (Anton Lesser) said it best – “If they can be wounded, they can be killed.” And we’ve already seen Drogon wounded once before, in a battle arena where he was continually pierced by arrows and spears, bleeding heavily and taking off with Daenerys – and then landing miles and miles away – in order to recuperate.

However, those injuries seem like nothing when you consider what happened to him this time, as Qyburn’s ‘Scorpion’ bolt pierces his right wing and he shrieks in pain, spiraling downwards until he lands in front of the bolt, breathing fire onto it and destroying the apparatus that let it fly.

The Game of Thrones episode ends on a cliffhanger, as Drogon shoots flames of fire towards an incoming Jamie Lannister (Nikolaj Coster-Waldau), before Bronn (Jerome Flynn) tackles him right into the water, (potentially) saving his life. Well, let’s be real – they’re not going to kill Jamie until he has a chance to reunite with his sister, Cersei Lannister (Lena Headey), and (possibly) kill her, according to the Valonqar prophecy.

Now, with that being said, it’s pretty obvious that Daenerys isn’t going to be feeling particularly charitable towards Jamie or Bron, especially since he came so close to mortally wounding her dragon.

This is an especially worrisome occurrence, when you consider the fact that both Qyburn and Cersei will now know that Drogon can be harmed, and if he can be harmed, he can be killed – and so can Dany’s other two dragons, Viserion and Rhaegal.

However, Dany, Drogon, and Team Dragon now have the knowledge that there is a dragon-harming Scorpion bolt in the hands of the enemies, and thus will likely be much more careful when attacking and/or roaming the skies near King’s Landing.

For now, we’ll have to gauge whether Drogon is just injured and down for the count, or whether – as some are rumoring – Qyburn’s Scorpion bolt was actually poisoned, leading to Drogon’s slow, painful, and inevitable death.

If Drogon doesn’t die, it’s possible that this weapon will find a way to take down either Viserion and Rhaegal, because it just seems unlikely – especially considering the show’s body count – that all three dragons will escape unscathed, not when we’re nearing the end of the show.

What do you guys think? Will Daenerys’ three dragons, Drogon, Viserion, and Rhaegal, die – if not by Qyburn’s Scorpion bolt or poison from said bolt, then by White Walker attack? Let us know your thoughts in the comments below and come back to CDL for all your Game of Thrones spoilers and recaps!