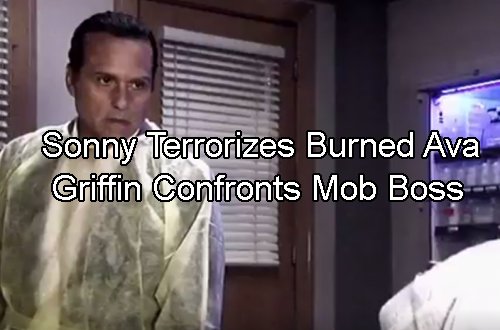 General Hospital (GH) spoilers from a new GH promo reveal that Sonny Corinthos (Maurice Benard) can’t let go of the grudge against Ava Jerome (Maura West) even when she’s on her deathbed in horrific pain. Sonny might be the cruelest man in Port Charles for how horribly he’ll treat his baby mama while she’s burned and on life support.

Kiki Jerome (Hayley Erin) was told today that Ava has burns on 50% of her body that are severe. Ava’s injuries are bad enough to kill her. Ava is heavily bandaged and in ICU in a clean room because even a small infection might kill her because of the severities of her injuries. Only doctors and nurses in safe suits are allowed in to see her, but that won’t stop Sonny.

General Hospital spoilers reveal Sonny puts Ava’s life further at risk when he sneaks into her room to confront her as she lays dying. When Ava comes to, she looks around for a doctor, but instead sees Sonny and she knows he might be there to finish her off since he’s furious about her swapping Morgan Corinthos’ (Bryan Craig) meds. If Sonny keeps acting this way, the PCPD might have to arrest him. 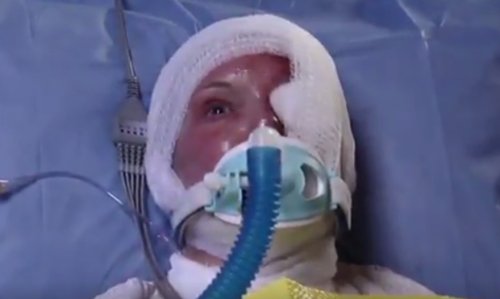 By coming into Ava’s restricted hospital room, Sonny is putting her life at risk and could be charged with a felony, but he thinks he’s above and beyond the limits of the law. Even knowing Ava is in horrible pain, he can’t stop himself from further tormenting her by making threats. Sonny tells her if she survives all this pain, he’s going to kill her anyway.

It seems that Sonny is trying to break Ava’s will to live. If he can stress her out enough, perhaps she’ll die there in the ICU and he won’t have to bother shooting her. It’s too bad for Sonny that he won’t get away with tormenting Ava for too long. Griffin Munro (Matt Cohen) is Ava’s doctor treating her in the burn unit and when he sees Sonny there, he knows the mob boss is doing bad things.

Griffin will chastise Sonny over punsihing Ava with threats. Griffin is a model of forgiveness and will have no patience for Sonny’s horrible behavior. Sonny stalking Ava at General Hospital will trigger Griffin’s protective nature and he’ll do everything he can to keep Sonny from getting anywhere near Ava again even if it means personally staying at her side to shield her from Sonny’s threats. 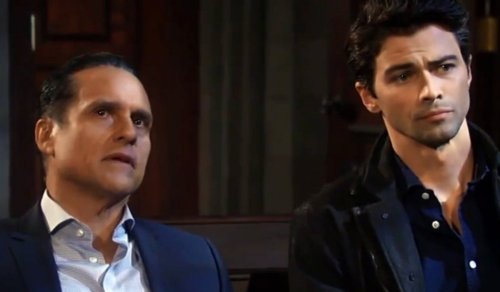 Griffin is one person that Sonny can’t scare so he won’t back down from him and will kick Sonny out of Ava’s room and let General Hospital personnel know that Sonny isn’t to be allowed anywhere near her again. This will infuriate Sonny, but he can’t do anything since Griffin has power at GH and Sonny does not. Little does Sonny know that his aggressive antics will change Ava’s life.

With Griffin put into the role of Ava’s physician and protector, it won’t be too long before doctor and patient begin to fall for one another. From there, if Sonny tries to take on Ava, that means he’s also got to deal with Duke’s son. Share your comments below on the next phase in the war between Sonny and Ava and tune into CDL often for more General Hospital spoilers and news.

THIS WEEK ON #GH… “Stop blaming everyone else and own it!” pic.twitter.com/W0mSJyZFbM