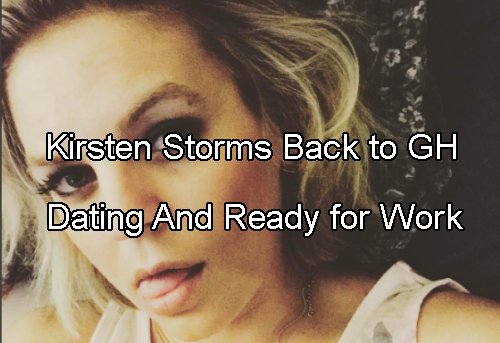 General Hospital (GH) spoilers tease that Kirsten Storms should be back to work any day now on the set of GH. The ABC soap was dark for two weeks – the week ending May 26 and this week ending June 2. Given Kirsten’s busy social media activity and fan event she’s booked, it seems very likely she could be back to work starting Monday, June 5 as Maxie Jones.

On Monday, May 29, Kirsten shared on Instagram a pic of a book and Starbucks coffee and said “my day today.” That same day, she shared an image from an adult coloring book she was toying with. Then on Tuesday, May 30, Kirsten shared a peek into her purse closet that she’d just reorganized. That night, Kirsten posted that she was out for dinner at Crave Café.

Earlier that day, she shared pics as she binge-watched House of Cards. Then later on Tuesday night, Kirsten shared a pic of herself with an unseen male companion at a comedy club and said “Date night.” Not only that, but Brandon Barash clicked like on that post. Kirsten has been posting every day which is a 180 from her social media ban she’s been on for weeks. 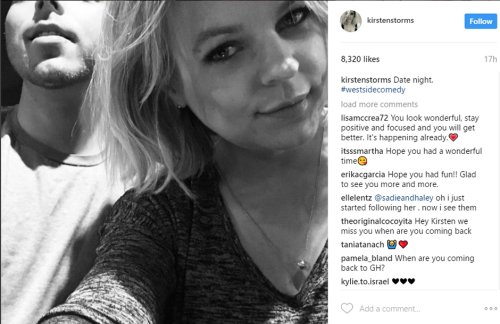 Kirsten’s plan for Wednesday, May 31 was a craft day at the house of very pregnant co-worker Emme Rylan (aka Lulu Spencer) who is due very soon. There have also been pics on Kirsten’s timeline of her with daughter Harper Rose Barash looking happy. In all of these pics, Kirsten Storms looks like she’s put on a bit of healthy weight, her hair and face look good, and she seems relaxed.

These are all good signs that we should have Maxie back in Port Charles very soon – perhaps when the show kicks off next week. There are still no General Hospital spoilers out about Maxie’s return, but since the show films a month or so in advance, we shouldn’t expect to see any about her for a few more weeks. But since Bradford Anderson (aka Damian Spinelli) is back on set soon, that’s a big hint.

There’s no way Spinelli would turn up in Port Charles without Maxie returning as well since she’s been staying near him supposedly working in Portland as a cover story for Kirsten’s very lengthy leave of absence. Whatever Kirsten did to get healthy on her three months off has clearly worked. She seems to be back to her old self and General Hospital fans can’t wait to see her back in Port Charles. 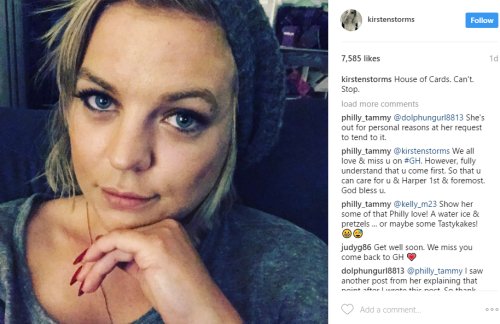 Maxie is missed by fans and by Nathan West (Ryan Paevey) who has found himself the object of some stalkery attention by nutty nurse Amy Driscoll (Risa Dorken) so he needs his wife back to town ASAP. Ironically, it might be Amy that helps bring Maxie back since she offered to help Nathan lure his wife back to town so they could reunite.

Check out the pics of Kirsten Storms looking happy and healthy and share your comments on Kirsten’s coming return. And be sure to check back with CDL often for the latest General Hospital spoilers, news and updates.