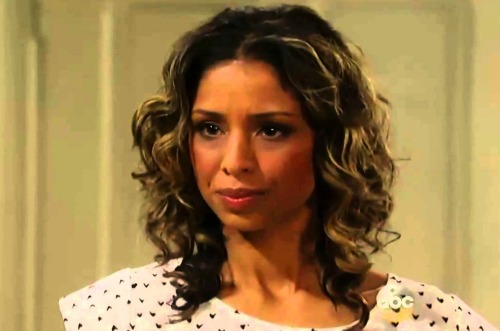 General Hospital (GH) spoilers tease that actress Brytni Sarpy (Valerie Spencer) stirred up pregnancy rumors with a post on social media. Find out what the actress said that is shocking fans and what it could mean for her future.

Like many in the entertainment business, Sarpy enjoys sharing posts and photos on social networking sites. On Monday, she had followers wondering if she was giving a hint of a big secret.

“Currently being punched internally in the stomach. Happy Monday!”

The statement made at least a few of her fans asking if she was pregnant. Even though there could be many reasons for stomach cramps, the first thing that comes to mind is a baby. Especially the way that Brytni Sarpy phrased it. 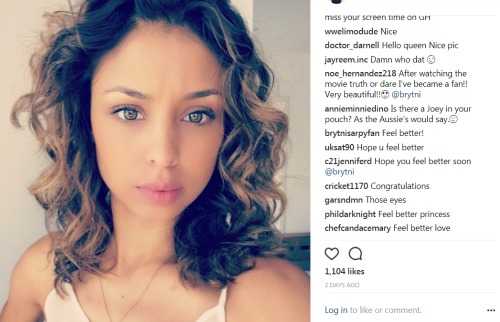 So far, General Hospital spoilers don’t give any confirmation on this pregnancy rumor. However, if she is expecting, it won’t necessarily affect her acting gigs. A lot of actresses continue to work while expecting. Sometimes it is written into the storyline. Other times, props, hiding behind furniture and clever clothing choices are used to hide baby bumps.

Of course, Brytni Sarpy would have to be very early in her rumored pregnancy. A recent Instagram photo shows a flat stomach with no sign of a baby bump at all.

However, this isn’t stopping fans from wondering and asking about it. General Hospital spoilers indicate that she hasn’t responded to any of the inquiries, but perhaps she will make a statement soon.

In December, her contract on GH ended. From January until the present, she was moved to recurring status. The last time she was seen on the soap was in early October. She has been with other projects, including Syfy’s Truth or Dare. If she is expecting, she will likely have to slow down a bit.

Look at the photo for yourself and be the judge. Was Brytni Sarpy hinting she could be expecting a little one? Or was her post referring to another type of stomach issue? Keep watching the GH soap and check back for the latest General Hospital spoilers, updates and news.

Update: Brytni Sarpy has stated that she is not pregnant but was merely suffering from stomach cramps – which have hopefully cleared up by now. Brtyni posted our original CDL article on her Twitter account (see below – which she then removed) with the following message: “You guys I’m not pregnant…I was referring to cramps” – so there you have it fans. 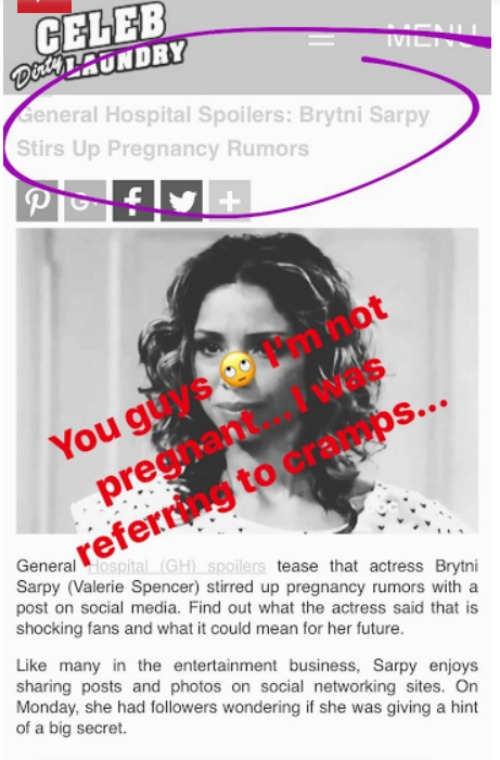