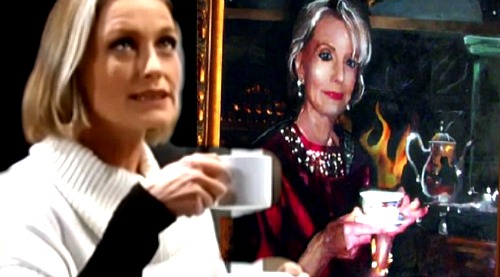 Cassandra blew into town under the guise of being a diamond dealer, who had dealt with Valentin Cassadine (James Patrick Stuart) on several occasions. She arrived in Port Charles with the hopes of a new venture, selling drugs out of the harbor and partnering up with Valentin, both in business and in bed.

Both plans were nixed – thanks to mob boss Sonny Corinthos (Maurice Benard) who controls the docks, and won’t allow drugs into his city and by Nina Reeves (Michelle Stafford) who won’t allow another woman near her husband. 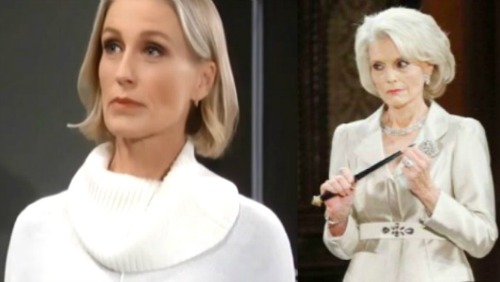 General Hospital spoilers reveal that Cassandra doesn’t take rejection well, and if GC buzz is right, she clearly has her mother’s genes because she has no fear. Cassandra is seen in the GH previews for Thursday’s new GH episode, December 28, telling Valentin it is time to “eliminate” Sonny. Cassandra is fascinating to watch as she is so elegant and mesmerizing, kind of like watching a cobra that hypnotizes its prey.

Remember how Helena used to tease and flirt with Luke Spencer (Anthony Geary)? There was no way in hell they would ever end up in bed together, but there was just the perfect level of flirtatious sarcasm happening between Cassandra and Finn that would remind viewers of Helena and Luke’s bantering.

General Hospital spoilers tease that Nina Reeves will need to watch her back as well. Cassandra may not have immediately reacted to Nina grabbing a handful of her hair and pulling it, but fans can rest assured that there will be definite payback for the utter disrespect in true Cassadine fashion. Especially since Cassandra has shown she can be ruthless, if not more ruthless than Helena has ever been.

Remember, just like Helena, she claims to know where Claudette Beaulieu (Bree Williamson) is and could ruin Nina’s happy little family in an instant! Cassandra has no qualms about destroying people’s lives.

How do you feel about Cassandra? Does she fit the image of Helena’s ruthless daughter? Be sure to tune into ABC’s General Hospital (GH) to catch up on everything happening right now in Port Charles. Check CDL General Hospital spoilers often for updates, news, and spoilers!