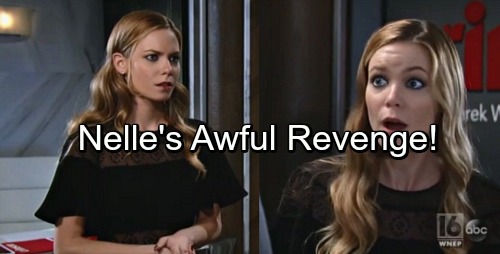 General Hospital (GH) spoilers tease that Nelle (Chloe Lanier) could be headed down a dangerous path. After Michael (Chad Duell) dumped her, there was a wild flicker in those cold eyes. GH might let Nelle hop the train to crazy town!

Nelle spent almost a year in a mental institution, but she claims it was a stress-related breakdown. That seems reasonable after everything Nelle’s been through. Still, it’s tough to trust anything out of Nelle’s mouth at this point. She’s been pretty stable since she arrived in Port Charles, but will losing Michael drive her over the edge?

General Hospital spoilers reveal that Nelle will try to come up with a plan. Once she has an idea in mind, she’ll put it in motion. Nelle will take some huge risks during the week of November 6-10. What kind of scheme will Nelle kick off? There are plenty of ways GH could take this storyline. Let’s consider a few of Nelle’s options.

Nelle and Michael have been busy in the bedroom lately, so she might be able to sell a fake pregnancy story. It’s also possible Nelle could really be knocked up, but a phony baby would dig a deeper hole for her. That’s not a ruse Nelle could keep up forever, so she would undoubtedly face more backlash.

Every now and then, soaps like to have someone go off the deep end and kidnap an obsession. Could Nelle lock Michael up and torment him? Naturally, that would lead to a desperate search by Michael’s family. It’d be the kind of November sweeps drama we’ve come to expect from GH.

Nelle may blame Carly (Laura Wright) and Bobbie (Jacklyn Zeman) for all her problems. She might think she can score another chance with Michael if she gets his disapproving relatives out of the way. Could Bobbie and Carly be in danger? Nothing’s out of the question when Nelle’s involved.

GH fans know everything changed for Nelle when she was mugged on the pier. Her misfortune was a blessing in disguise. Perhaps Nelle will stage an accident to soften Michael once more. That sounds like a plan that could go horribly wrong!

Nelle has dirt on Valentin (James Patrick Stuart), so it’s possible that she’ll play with fire and demand his help. That’d be a perilous decision, but Nelle isn’t thinking clearly anymore. Nevertheless, Valentin is a man who can make things happen. Could he turn Nelle’s luck around? Would he double-cross her in the end? Regardless, it’s not a good idea to get mixed up in Valentin’s shady business.

What do you think Nelle’s next move will be? Are you hoping Nelle goes off the rails? We’ll give you updates as other General Hospital news comes in. Stay tuned to the ABC soap and don’t forget to check CDL often for the latest General Hospital spoilers, updates and news.