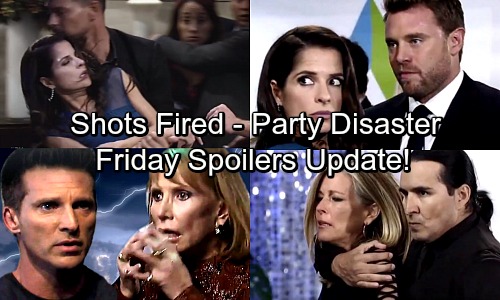 General Hospital (GH) spoilers for Friday, October 27, tease that Cassandra (Jessica Tuck) will have another secret meeting with Valentin (James Patrick Stuart). She knows that he’s the right man for the job and she won’t let him avoid this forever. Cassandra will argue that Valentin needs to join her project and make more money than he could ever imagine.

Across town, Mac (John J. York) and Felicia (Kristina Wagner) will try to get to know Finn (Michael Easton) a bit better. Anna (Finola Hughes) will hope she can keep Finn focused on the task at hand. They have to keep their charade going if they want to fool Cassandra and get the answers they’re seeking. Finn might make a mistake or two, but they’ll make it through this dinner eventually.

Other General Hospital spoilers say Andre (Anthony Montgomery) will struggle to eliminate his problem. Franco (Roger Howarth) will examine the “proof” that confirms Andrew is dead. It seems a fabricated death certificate could create a few doubts, but Franco may not be entirely convinced. He probably won’t be able to shake the feeling that Drew’s alive.

Jake’s (Hudson West) Patient Six sighting will certainly be on Franco’s mind. Several partygoers will witness a P6 sighting soon as well. Before that shocker, Dr. Klein’s (Gene Farber) thugs will threaten the lives of all the guests. Of course, there’s really just one that they want. Sam’s (Kelly Monaco) about to be drugged and kidnapped, but help will be on the way before long. 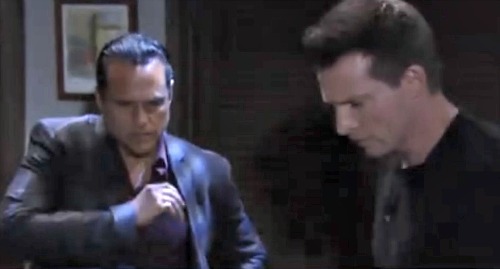 Carly (Laura Wright) will grab her phone and fill Sonny (Maurice Benard) in on the chaos. Once Sonny and Patient Six are in the loop, they’ll dash off to save the day. Meanwhile, Jason (Billy Miller) will fight off one of Dr. Klein’s minions. They’ll have a violent showdown as Jason tries to stop the madness.

It looks like another thug will fire a shot. Will someone take a bullet on this terrible night? Time will tell, but Liz (Rebecca Herbst) will definitely panic over this crazy situation. GH spoilers say Griffin (Matt Cohen) will support Liz until everyone can get to safety.

Later, Patient Six will run through the crowd on the hunt for Sam. Sonny will turn his attention to Carly. She’ll be in extreme danger when she faces a goon’s weapon, so some serious excitement is coming up. We’ll give you updates as other General Hospital news emerges. Stay tuned to ABC’s GH and don’t forget to check CDL often for the latest General Hospital spoilers, updates and news.