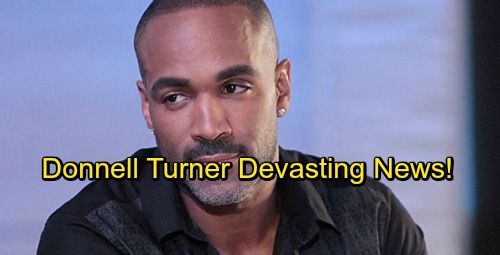 General Hospital (GH) spoilers reveal Donnell Turner, who portrays PI Curtis Ashford on the ABC soap opera, has shared with fans the devastating news that one of his dear friends has been tragically affected by the wild fires destroying Southern California right now. On his personal Twitter account he says that his friend lost everything but the clothes on his back. His animals were saved, but his ranch, home, and property are gone, including everything that was supposed to be protected in a “fireproof” safe.

CDL GH spoilers have been keeping fans up to date on the six monstrous fires that are ravaging California and how many of our beloved soap opera stars are living in some of the danger zones. Kimberly McCullough, who has played Dr. Robin Scorpio Drake, on and off since 1985, has been evacuated along with her six-month-old son, Otis, taking the time to thank fans for their prayers and revealing that so far their house is standing.

General Hospital fan favorite Finola Hughes (Anna Devane) has also been evacuated as co-star James Patrick Stuart (Valentin Cassadine) gave updates, asking for prayers and love as her home was directly in the path of another one of the deadly fires. Jennifer Lilley, who briefly portrayed Maxie Jones on General Hospital in 2011-2012, but best known for her role as Theresa Donovan on NBC’s Days of Our Lives also shared that they were evacuated, but safe now, on her Twitter.

We would like to continue to keep all the people of California in our thoughts as these fires continue to rage out of control and thank the brave men and women who tiredlessly attempt to contain them. Kimberlin Brown, who has played Sheila Carter on both CBS’ The Bold and the Beautiful and The Young and the Restless as also been deeply affected by the fire, revealing on her Twitter account this afternoon, that even though they had to evacuate last night, her Avocado farm has been spared.

My dear frnd just lost EVERYTHING bt the clothes on his back😞 Animals wr saved bt ranch, home, property & cash in “fireproof safe all gone.