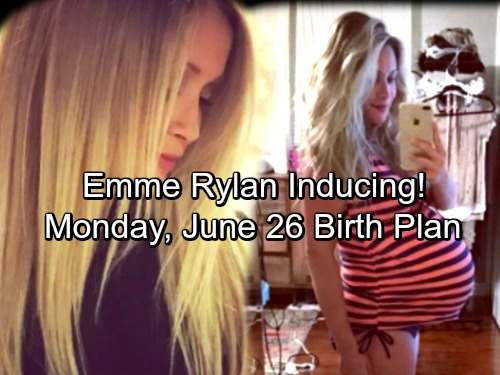 General Hospital (GH) spoilers reveal Emme Rylan, who portrays Lulu Spencer Falconeri, is going to be induced on Monday, June 26, after she has gone overdue on this pregnancy. Rylan has been very open this pregnancy, sharing many beautiful pictures as the she’s gotten bigger and bigger; even joking that someone had congratulated her on the “twins”.

She even takes pictures and poked fun at how hard the powers that be tried to hide her massive belly, especially at the Nurses Ball in that huge, over-the-top hideous gown. GH’s Emme Rylan, formerly known as Marcy Rylan has been together with fiance, Don Money for 10 years and they share two sons, Jackson and Levi together; that’s what makes this pregnancy extra special; they are expecting a girl!

At this time, Emme admits they don’t have a name picked out, so be sure to check back often as we will definitely announce everything we learn when she arrives. Sources show she is ready for this pregnancy to be over with by sharing on her social media that the eviction notice has been given, and the induction will happen Monday, June 26, 2017. 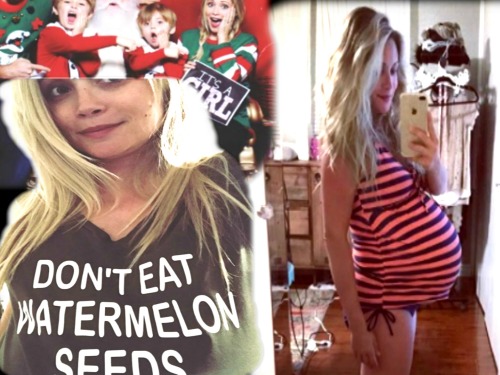 General Hospital currently has her character, Lulu in a vulnerable state. She has just won full custody of her daughter, Charlotte Cassadine (Scarlett Fernandez) by default, after her father, Valentin Cassadine (James Patrick Stuart) was carted off to jail for stealing the Chimera from the WSB; putting an end to their custody battle, where Lulu was only granted very limited visitation.

GH spoilers confirm Emme Rylan is not taking maternity leave, which is a great thing since she is the last true-blooded Spencer in Port Charles. Her father, Luke Spencer Anthony Geary) has long abandoned Port Charles, only returning to the ABC daytime drama series to escort Tracy Quartermaine (Jane Elliot) off screen into retirement.

Her brothers, Lucky (Jonathan Jackson) and Ethan Love (Nathan Parsons) are off to parts unknown, and her mother, Laura Webber (Genie Francis) is still around, but she has moved on from her Spencer days and is now with a good, kind man, Dr. Kevin Collins (Jon Lindstrom).

Be sure to tune into ABC’s General Hospital (GH) to catch up on everything happening in Port Charles right now; and as we continue to be on baby watch, stay tuned for the big announcement. Check CDL General Hospital spoilers often for updates and news!

Certainly she has had the baby by now…. nope. #stillpreggers Living in the pool these days, it’s the only way to hold this belly up!! #bumpin Monday the #evictionnotice will officially be served.